Sister Patricia Fox: ‘Whatever happens, I will be forever grateful’

Apr 25, 2018 5:10 PM PHT
Paterno Esmaquel II
Facebook Twitter Copy URL
Copied
'I may lose my right to be in the Philippines, but I can never lose the learnings and beautiful memories,' says Australian nun Sister Patricia Fox, whom the Bureau of Immigration ordered to leave the Philippines 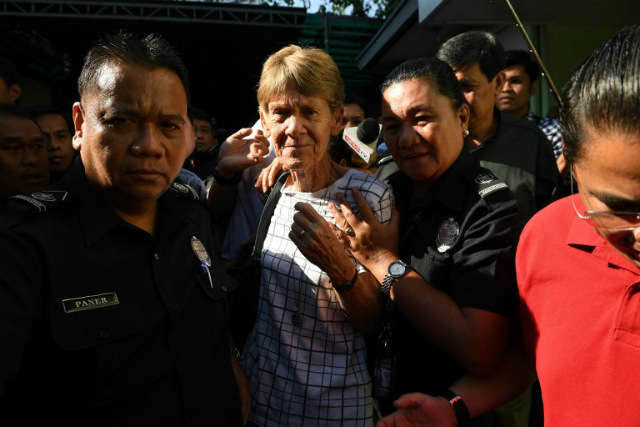 MANILA, Philippines – Sister Patricia Fox said she is “very sad” that the Bureau of Immigration (BI) on Wednesday, April 25, announced it was ordering her to leave the Philippines after 27 years as a missionary here.

Fox, 71, who is accused of engaging in partisan political activities, explained it is part of missionary work to fight for human rights.

“I am still hoping for a chance to explain how I see my mission as a religious sister and maybe the decision can be reconsidered,” she said in a statement on Wednesday.

“Whatever happens, I will be forever grateful to all those Filipinos that I call my friends and for all those from both church and sectors who have supported me through this time. I may lose my right to be in the Philippines, but I can never lose the learnings and beautiful memories,” the Catholic nun added.

Fox said it was only through the media that she heard of the BI’s decision on her case. She was surprised.

Her lawyer, Jobert Pahilga, said Fox cried. Pahilga said their camp will file a motion for reconsideration before the BI.

Fox, who knows how to speak Filipino, looked back at the nearly 3 decades she has been in the Philippines.

“In 1990, when my Congregation was asking for volunteers to come to the Philippines, I eagerly volunteered as I had Filipino friends in Australia. It took a while to become a bit inculturated as things are done differently, but the people in the rural areas, where I spent most of my time, were so patient and laughing with me at my mistakes,” Fox recalled.

Fox said she eventually learned “some of the basic issues” that cause poverty among the rural folk – “lack of their own lands, control of markets, dependence on pesticides.”

In staying with tribal people, she got to know “how the mountains are their supermarkets and pharmacies,” and how excited they were “to have their own schools which taught sustainable agriculture but also preserved their culture.”

She also witnessed “how large mining and logging corporations, as well as plantations, were threatening the life and livelihood of these rural people.”

In the city, she “came to know the situation of the workers and their lack of job security which is now happening in other countries as well.”

“As a Christian, believing that our mission is to bring God’s Kingdom to the here and now, I couldn’t help but to get involved both with projects, such as training in organic farming, to uplift the livelihood of the farmers, but also to advocate with them for their rights to land, livelihood, peace, justice, and security – all universal human rights which the church sees as integral to her mission,” she said.

“It seems this is what has brought me into conflict with the Philippine government,” she added.

“We forfeited her privilege of holding a missionary visa because of her activities which are in violation of the terms and conditions of her visa,” said Roque, a former human rights lawyer.

Senators meanwhile gave opposing views on the BI order for Fox to leave.

The BI earlier detained Fox on April 16 after arresting her at her religious congregation’s Quezon City mission house. She was released nearly 24 hours later.