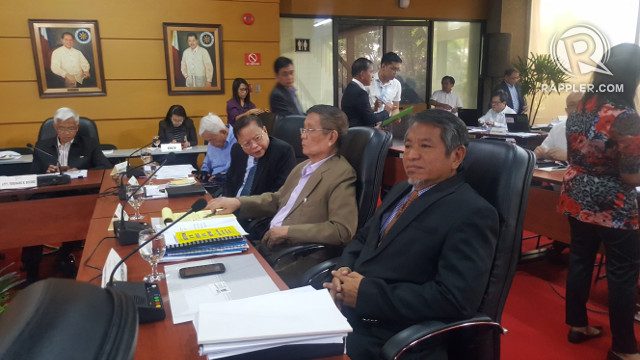 MANILA, Philippines – The Consultative Committee is confident that more Filipinos will support amendments to the 1987 Constitution once the Con-Com presents its proposals to the public.

The Con-Com made the statement on Wednesday, May 2, in response to the findings of a Pulse Asia survey that a majority of Filipinos do not want the Constitution changed at this time.

“Once we are done and the proposed revisions are presented to the public, we are confident that the public perception will change,” the Con-Com said.

The Con-Com noted that the survey was conducted at a time when it was still working on a draft federal constitution. The survey was held from March 23 to 28, 3 months after President Rodrigo Duterte appointed the committee’s members.

It also disputed how the results were interpreted by Pulse Asia, stating that respondents who said, “No, the Constitution should not be amended now, but it may be amended sometime in the future,” should be considered as in favor of charter change.

Pulse Asia added together all respondents who said no to charter change now or in the future, to arrive at the conclusion that 64% of Filipinos are not in favor of constitutional amendments.

The Con-Com said respondents who say no to charter change now but also say they may change their mind in the future, “are in reality in favor of amending the Constitution, only that it should be done sometime in the future.”

“To their mind, the future could be next year or it could be in 2019 – when the proposed revisions may be ready for submission to them in a plebiscite,” it added.

Nevertheless, the Duterte-formed group said it would take the survey results as a “guide and challenge that the proposed constitution…shall face at the proper time – when it is submitted for ratification.”

The Con-Com is targeting to submit its draft constitution to Duterte by his third State of the Nation Address in July. – Rappler.com