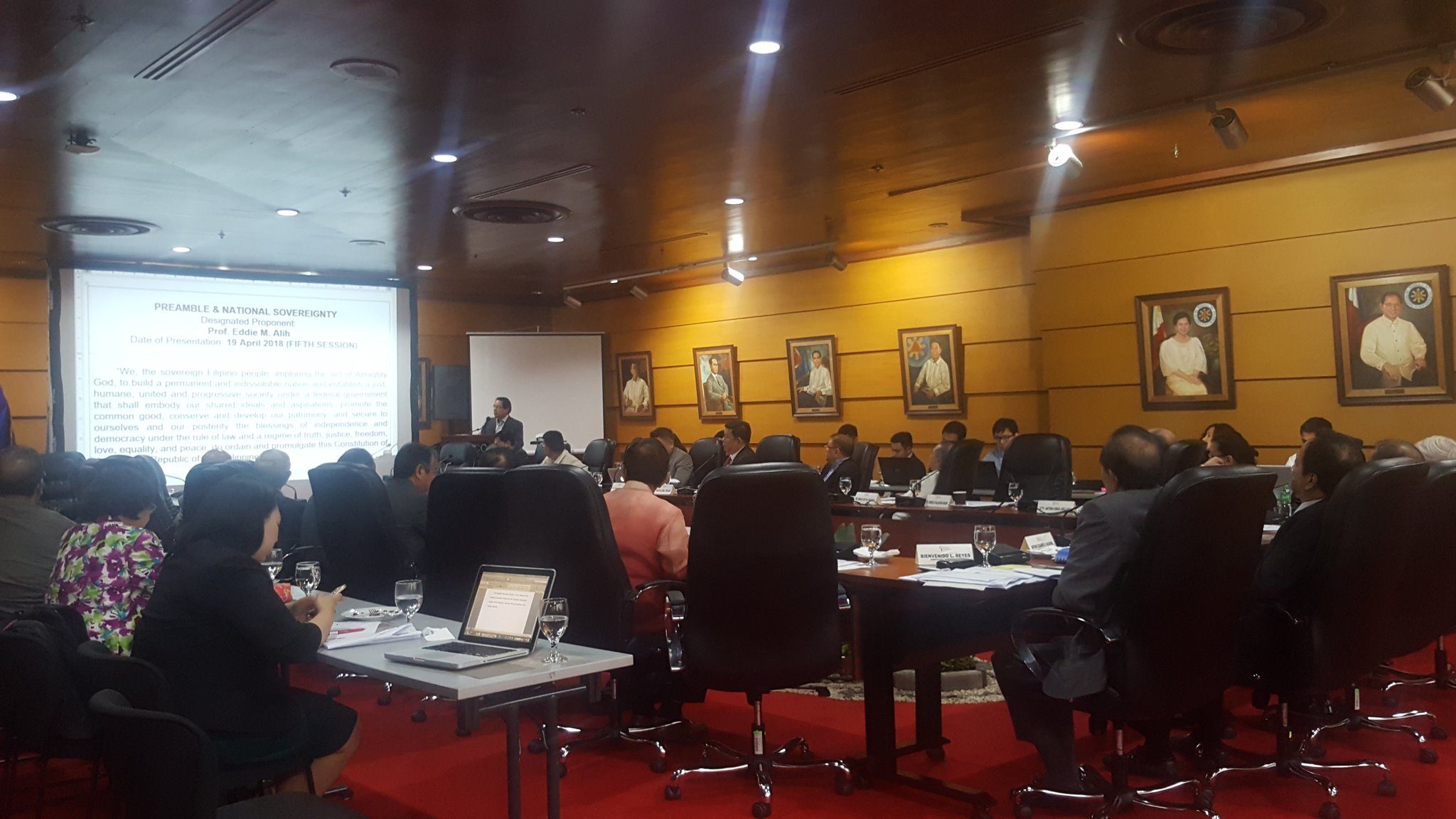 MANILA, Philippines – The Consultative Committee (Con-Com) has voted unanimously to adopt the wording of the preamble to its proposed federal constitution, which seeks to protect and strengthen national unity amid diversity.

The Con-Com made the vote during an en banc session on Wednesday, May 2.

The finalized preamble is as follows:

“We, the sovereign Filipino people, imploring the aid of Almighty God, to build a permanent and indissoluble nation and establish a just, humane, united, and progressive society under a federal government that shall embody our shared ideals and aspirations, promote the common good, conserve and develop our patrimony, and secure to ourselves and our posterity the blessings of independence and democracy under the rule of law and a regime of truth, justice, freedom, love, equality, and peace, do ordain and promulgate this Constitution of the Federal Republic of the Philippines.”

In comparison, the 1987 Constitution reads:

“We, the sovereign Filipino people, imploring the aid of Almighty God, in order to build a just and humane society and establish a Government that shall embody our ideals and aspirations, promote the common good, conserve and develop our patrimony, and secure to ourselves and our posterity the blessings of independence and democracy under the rule of law and a regime of truth, justice, freedom, love, equality, and peace, do ordain and promulgate this Constitution.”

Con-Com members explained the main differences and significance of the proposed preamble during the session.

Insertion 1: “to build a permanent and indissoluble nation”

This underscores that the nation will remain united even as it celebrates diversity. Libarios said the phrase “will cast away any doubt whatsoever that federalism will result in fragmentation.” Con-Com Chairman Reynato Puno said this makes secession unlikely.

“There must be consent by all the people before there can be secession and secession must be based on a moral cause. By our preamble, our sovereign people will be voting no to any secession,” said Puno.

Insertion 2: use of the words “united” and “progressive”

The words stress that the Philippines is shifting to federalism to be more unified and to spur inclusive economic development, said Libarios.

Insertion 3: use of word “shared”

The word is not used in the preamble of the 1987 Constitution. This one emphasizes common ideals and aspirations of Filipinos even as the regions are able to govern themselves.

Puno, in his speech to explain his vote, said the most important aspect of the recommended preamble is that it highlights a bond that will never break between the federated regions to be proposed.

It expresses commitment by Filipinos that no region will break away from the country.

“Our proposed preamble proposes a union that is indissoluble, a federalism that is permanent, a bond that is eternal. This is not just a grandiose display and play of words but a pledge by all our people, a promise by all our constituent regions, not to secede from the new federal republic,” said Puno.

Secession is to be avoided at all cost, said Puno, noting the great loss of lives and disruption due to conflicts over secession.

“This pledge not to secede is ultra-important, for today the world is beset by the problem of secession of states, an action often written in blood and in bullets,” said the former chief justice. – Rappler.com