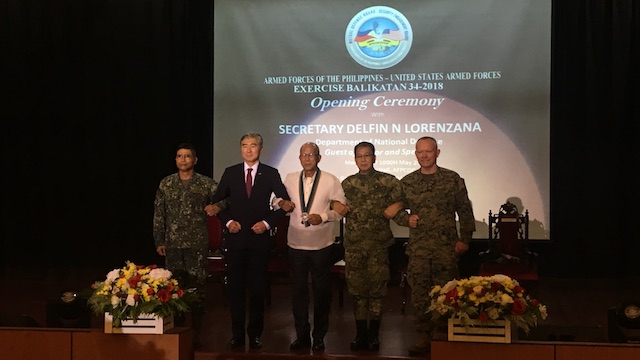 MANILA, Philippines (3rd UPDATE) – The annual Balikatan exercises between the Philippine and US militaries formally opened on Monday morning, May 7, in the wake of concerns over missiles China installed on artificial islands in the West Philippine Sea (South China Sea).

The annual military training exercises are aimed at making sure the militaries can work jointly in the event the two countries need to activate the Mutual Defense Treaty (MDT) that binds them to come to each other’s defense if one or the other’s sovereignty is threatened. (WATCH: #Balikatan2018 speeches celebrate PH-US ties)

The generals refused to comment on developments in the West Philippine Sea, however.

“This exercise was scheduled whether those missiles were there or not. There are constant things developing within the region but the exercise has long been planned,” said Lieutenant General Lawrence Nicholson of the US Pacific Command.

“We intend to focus our activities in the objectives that we have set. We have to enhance our cooperation and military responses and these are all intended to provide training opportunities for both armed forces,” said Lieutenant General Emmanuel Salamat of the Philippine military.

The generals instead highlighted how close cooperation between the two militaries were exhibited during the siege of Marawi in 2017 and in the aftermath of Typhoon Yolanda (Haiyan) in 2013.

“We want our forces to learn from our great and hard-earned experience in our past battles like Marawi. This is one of the highlights of this year’s activity,” said Salamat.

Salamat and Nicholson are the exercise directors this year.

PH-US Balikatan 2018 military exercises open. About 8,000 troops from treaty allies Philippines and US, along with allis Australia and Japan, are participating @rapplerdotcom pic.twitter.com/ChJNu3NnCN

This year’s Balikatan is the second under Duterte, who at the start of his term threatened to end the military exercises. Ties between the two countries have since improved. (READ: Duterte’s pivot to China won’t be easy for Americanized PH military)

Up to 8,000 forces are participating in the military exercises this year, including observers from allies Australia and Japan.

“Through this exercise, we hope to improve our counter-terrorism capabilities in order to build safer communities and work towards the eradication of global terror networks,” Lorenzana said.

The exercises are held after the April groundbreaking ceremony of the first major facility of the US in the Philippines under the Enhanced Defense Cooperation Agreement (EDCA). The US will build disaster response facilities at the Basa Air Base in Pampanga.

The China-friendly government of the Philippines has called for sobriety over China’s missiles, cautioning against open attacks of superpower. Critics have slammed the defeatist attitude displayed from the top.

Presidential spokesperson Harry Roque, a former critic of Chinese activities in the West Philippine Sea, said the country’s “close relationship and friendship with China” is an assurance that the “missiles are not directed at us.”

The military generals have been mum due to a long-running government policy to let only the Department of Foreign Affairs and Malacañang to issue statements.

The strongest protest so far came from Vice President Maria Leonor Robredo, the de facto leader of the opposition. She issued a statement on Sunday urging the government to file a diplomatic protest “to protect what is rightfully owned by the Filipino people.”

Salamat, the Philippine exercise director, is chief of the Northern Luzon Command. It is the military command responsible the disputed Scarborough Shoal.

The major Balikatan activities will be held in major camps under Nolcom. Exercises with the Americans are traditionally held in Fort Magsaysay in Nueva Ecija, Crow Valley in Tarlac, and Naval Education and Training Command in Zambales.

US forces arrived in April for pre-Balikatan community engagement activities. They worked with Filipino troops in constructing school building and medical missions in different sites in the provinces of Tarlac, Nueva Ecija, Cagayan, and Isabela. – Rappler.com