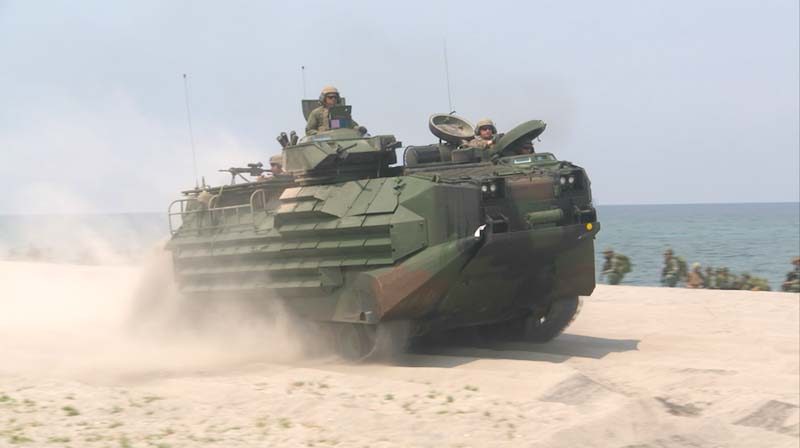 Facebook Twitter Copy URL
Copied
The amphibious landing exercise is held in a naval base in San Antonio, Zambales, which faces the South China Sea and is over 200 kilometers from Scarborough Shoal

ZAMBALES, Philippines – The Philippine and United States navies on Wednesday, May  9, held an amphibious landing exercise at the Naval Education and Training Command in Zambales amid growing concerns over China’s militarization of the South China Sea.

At 10 am on Wednesday, around a hundred Filipino and American troops stormed a stretch of the base’s shore, over 200 kilometers from Panatag (Scarborough) Shoal which is being claimed by China.

The drill was premised on a supposed threat in a nearby town, and the troops’ mission was to secure it. True to the name of the exercises, Filipinos and Americans accomplished the mission and stood shoulder-to-shoulder in victory.

The amphibious landing drill is the first of 3 under this year’s Balikatan, the 34th annual military exercises between the two countries. It is the only exercise opened for media coverage.

It may just be a show, but it is a show of force crucial to Philippine-US relations under Duterte.

What is it for? The shoreline exercise aims to enhance the interoperability of the two allies in case of a threat.

Interoperability matters to militaries because the highly hierarchical organizations have their own language on the field.

Jargons, procedures, and customs on scenarios from disaster response to full-blown warfare are shared in the exercises from generals down to ground troops.

The gains from the nurtured interoperability were put on display when US forces helped in disaster relief after Super Typhoon Yolanda in 2013 and the Marawi siege in 2017 – the most devastating natural and manmade disasters, respectively, in recent Philippine history.

Why it matters: The Philippines has one of the weakest militaries in Asia and lies along the path of typhoons, making it vulnerable to external threats as well as natural disasters.

Philippine forces managed to liberate Marawi from terrorists, but the whole of Mindanao remains under martial law, pointing to concerns over a resurgence of the threats.

This year’s Balikatan is the second under the presidency of Rodrigo Duterte, who introduced an “independent” foreign policy that seeks to wean the Philippines from its traditional allies like the US, and build stronger ties with countries like China  and Russia.

Philippines-US ties under Duterte started on the wrong foot after Duterte hurles expletives at then US President Obama in several public engagements for supposedly meddling in Philippine affairs when he expressed concern over human rights abuses in Duterte’s campaign against illegal drugs.

Ties have apparently normalized after US President Donald Trump took over the White House. Trump established rapport with Duterte after the US leader commended him on his fight against illegal drugs. – Rappler.com