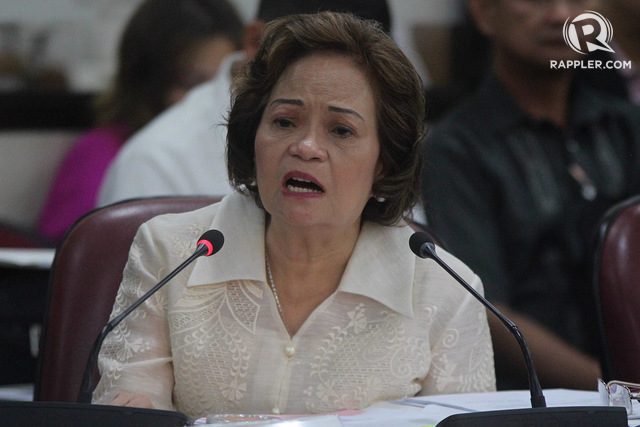 The Supreme Court (SC) voted 8-6 to grant the quo warranto petition seeking to nullify Sereno’s appointment. Among those who agreed to remove the Chief Justice was De Castro. (READ: EXPLAINER: How SC majority tried to close all doors for ousted Sereno)

In her 45-page concurring opinion, De Castro said Sereno failed to submit her Statements of Assets, Liabilities, and Net Worth (SALNs) from 2002 to 2006, back when she was still a professor at the University of the Philippines (UP) College of Law.

De Castro also said Sereno lied to the Judicial and Bar Council (JBC) so her name would be included in the shortlist of nominees for chief justice despite failing to comply with the SALN requirement. (READ: Was she required to file? How Sereno explains her missing SALNs)

De Castro – Sereno’s bitterest rival among the SC justices – did not mince words against the former chief justice, arguing that Sereno repeatedly lied and bent the rules in her favor since being considered for the post she now no longer holds.

According to De Castro, Sereno “continuously demonstrated her proclivity to lie, mislead, bend the rules, and exploit the exemptions, in disregard of constitutional, statutory, and regulatory parameters; ethical conduct; and collegial courtesy.”

“Considering the foregoing, respondent’s appointment as Chief Justice of the Supreme Court, secured through her lies and deception in the entries in her sworn PDS (Personal Data Sheet) and regarding her non-compliance with the abovementioned SALN requirement of the JBC, is void ab initio, and for such reason, I vote to grant the petition for quo warranto,” added De Castro.

De Castro publicly revealed her sentiments against Sereno when she appeared before the House justice committee during the ex-chief justice’s impeachment hearings late last year. (READ: Sereno impeachment: Cracks in the Supreme Court)

De Castro has now been nominated to replace Ombudsman Conchita Carpio Morales, who is set to retire in July 2018.

De Castro agreed with the view of Senior Associate Justice Antonio Carpio that applicants for judicial positions should not be required to submit SALNs more than 10 years prior to the application.

De Castro said this means applicants to the vacant position of chief justice in 2012 should still be able to submit their SALNs as of December 31, 2002 until December 31, 2011.

De Castro cited the letter Sereno wrote to the JBC on July 23, 2012. In the letter, Sereno told the JBC it would no longer be feasible for her to retrieve the SALNs she filed as UP College of Law professor as these date back to more than 15 years ago.

But De Castro said the ousted Chief Justice taught at the UP College of Law from 1986 to 2006 and got her permanent status in 1994. That meant Sereno should have still been able to submit her SALNs from 2002 to 2006.

“She did not even make an attempt to secure the said SALNS from UP,” said De Castro.

The associate justice said only Sereno’s 2002 SALN was on record in UP.

De Castro said Sereno, in the same letter, gave the impression she had submitted all her required SALNs to UP and the clearance the university gave her upon her resignation meant she had complied with the SALN requirement.

“Respondent’s letter contained several misrepresentations/lies, all with the collective intention of convincing the JBC that she need not submit her SALNs even for just the immediately preceding 10-year period,” said De Castro.

For De Castro, Sereno’s “pattern of lies” began when she claimed in her PDS that she was deputy commissioner for the Commission on Human Rights (CHR).

The associate justice argued that this is a false claim because the position of deputy commissioner for the CHR was merely a “functional title.”

De Castro also said Sereno gave the impression in her PDS that she was a lecturer at the University of Western Australia (UWA) from 2003 to 2007.

“The deliberate omission of The Esteban School in respondent’s 2010 PDS and 2012 PDS was just another audacious attempt to deceive, and respondent persisted in this lie when she refused to immediately acknowledge during the oral arguments that she had taught at The Esteban School,” said De Castro.

De Castro had dedicated the first 21 pages of her concurring opinion to justifying why she did not inhibit herself from the quo warranto case.

The associate justice made her case by mentioning several issues that were previously raised during the House’s impeachment hearings, including the following:

De Castro also recalled the line, “Hanggang kailan pa kami magtitiis (Until when will we suffer)?” which she said during Sereno’s impeachment hearings at the House.

According to De Castro, that line does not refer to Sereno’s removal from office. Instead, it was a “plea for respondent to mend her ways and to put a stop to her habit of misleading and/or bypassing the court en banc.”

“All I am interested in is to put a stop to respondent’s repeated violation of the Constitution by arrogating unto herself matters that should be submitted to the Court en banc for deliberation and approval and to prevent further adverse consequences to public service,” said De Castro.

De Castro argued that contrary to the criticism thrown at her, the remarks she made against Sereno were not due to a personal grudge.

“I reiterate that my testimony, objectively given based on facts and fully supported by official documents, could not be said to have been motivated by prejudice or personal grudge, or to be indicative of bias or partiality,” said De Castro.

“Thus, any allegation of my prejudice or partiality against respondent, amounting to a denial of respondent’s due process, utterly lacks basis,” she added.

Read the full copy of De Castro’s concurring opinion below: