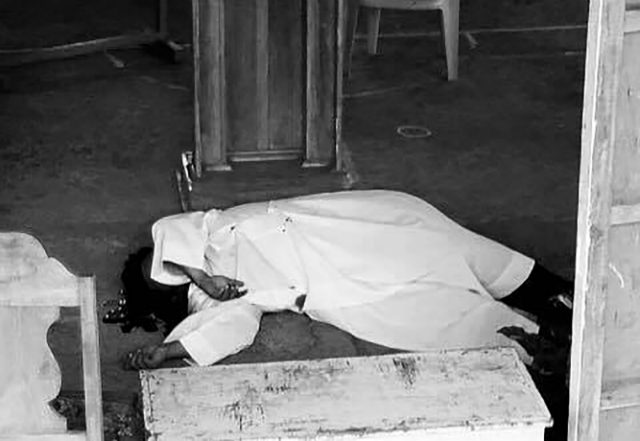 “Murder is murder, whatever the motive for it may have been,” David said on Sunday, May 20.

Duterte first linked Ventura to supposed illicit affairs in a speech in Tabogon, Cebu, on Sunday afternoon. The President did this by showing a matrix of the 37-year-old priest’s alleged affairs with at least 4 women.

Duterte did not name the priest, but showed the cover page of the matrix, with the title, “Shooting to Death of Father Mark Anthony Ventura.”

It is unclear how the matrix on Ventura was produced. Previous matrices presented by the President were later found erroneous.

Ventura, 37, was shot dead by riding-in-tandem killers as he was blessing children after a Mass in Gattaran, Cagayan, on April 29.

“If Fr Mark’s case is a ‘DUI,’ i.e. a death under investigation, it remains unresolved for as long as the murderers are not being brought to justice,” David said.

David, who describes his diocese as a “killing field,” is one of the bishops most outspoken against extrajudicial killings. (READ: Caloocan Bishop Pablo David: Shepherd of his slaughtered sheep)

David also held on to the words of people who knew Ventura, including his archbishop, who vouched for the priest’s integrity.

“I will hold on to the words of the archbishop, priests, and lay people of Tuguegarao who have vouched for the integrity of Fr Mark,” he said.

“I hope and pray that the Archdiocese of Tuguegarao can help in establishing the truth in the interest of justice, especially now that Fr Mark is already dead and no longer has the capacity to defend himself against such serious allegations,” the Caloocan bishop added.

Rappler is still trying to reach the Archdiocese of Tuguegarao, where Ventura belonged to, as of posting time.

Tuguegarao Archbishop Sergio Utleg earlier described Ventura as a young, dedicated priest who even requested to serve as a missionary in remote areas of Cagayan. Utleg said Ventura was a priest “who smelled like his sheep.”

Manila Archbishop Luis Antonio Cardinal Tagle also denounced Ventura’s death, as he called for the tolling of church bells at 8 pm every evening to remember the slain priest.

“We condemn this evil act!” said Davao Archbishop Romulo Valles, president of the Catholic Bishops’ Conference of the Philippines (CBCP), in a separate statement.

“We make our appeal to the authorities to act swiftly in going after the perpetrators of this crime and to bring them to justice,” Valles added.

Police earlier said they were looking into “serious personal grudges” as a possible motive in Ventura’s murder.

A priest for almost 7 years, Ventura was “known for his anti-mining advocacies and for helping indigenous peoples in the province,” said the news service of the CBCP.

Ventura was the second priest to be killed in the Philippines in a span of 4 months.

In an earlier statement, the Order of Carmelites’ Justice and Peace and Integrity of Creation Commission cited a “crackdown” on church people, including Ventura, Paez, and Sister Patricia Fox, whom the Bureau of Immigration recently ordered to leave the Philippines.