MARAWI STORIES: ONE YEAR AFTER THE SIEGE

We heard stories of tireless men inside mechanized tanks, or those who ran or dodged bullets, but did we ever know who had their back?

Those who assisted them were mostly new soldiers who went through a drastic transition from training to actual combat – against terrorists at that.

They are members of the First Scout Ranger Regiment or the FSRR, a Special Operations Command Unit of the Philippine Army. To become an elite Scout Ranger, one must undergo 6 to 7 months of brutal training, which will be tested during a life-threatening mission.

When they were thrown into Marawi, they found a setting different from what their trainings made them to expect, and they were also surprised by how quickly the conflict escalated.

Some young privates recently penned brief journals about their experiences in Marawi. Here are the stories of 6 of them.

Private First Class J. Morido, 25, from Sta Ignacia, Tarlac City, is the youngest and the only girl among 4 siblings. After earning a bachelor’s degree in criminology, she went straight to train with the Philippine Army and got enlisted in the First Scout Ranger Batallion. 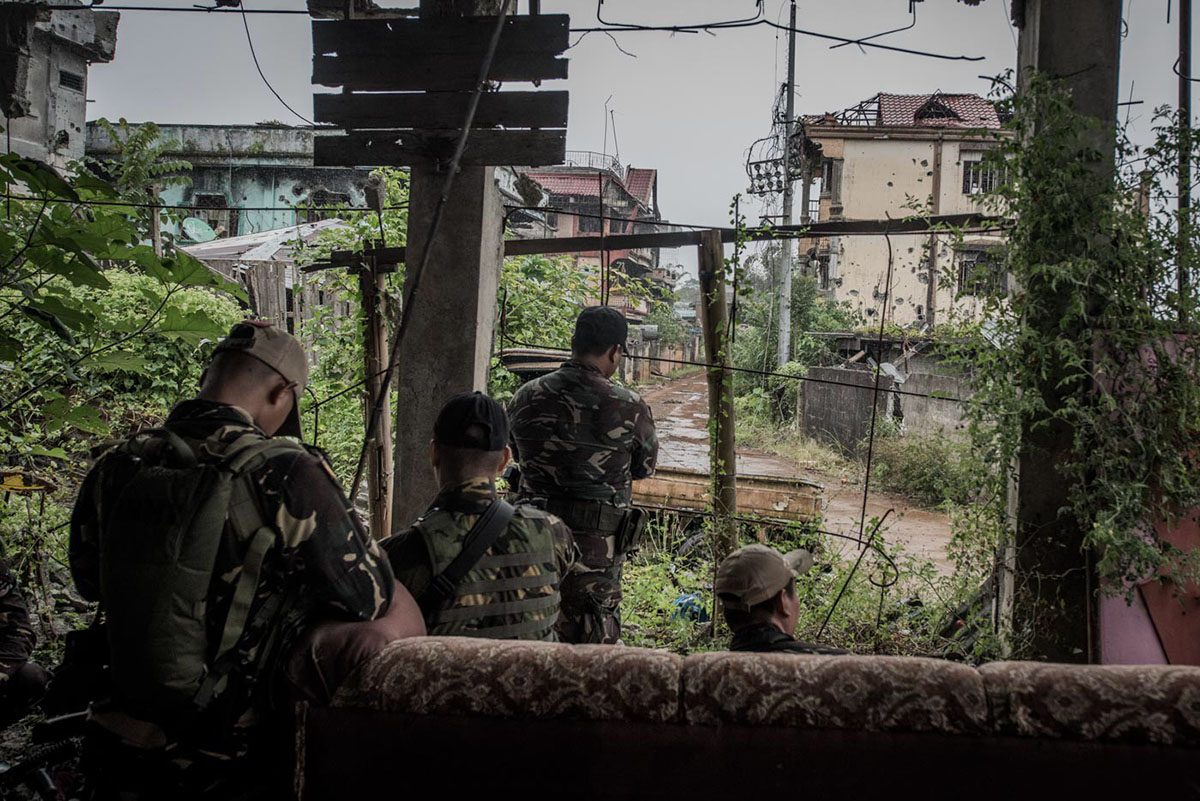 In April 2017, I served under the one-month leadership of LTC Yunque during the Battle of Piagapo. It was my first major encounter while belonging to the Combat Support Unit. We provided the troops their basic needs and necessary support in the frontline, such as food, medicines, ammunitions, etc. While the battle lasted for almost 5 days, welfare of men is kept safe and secure. A month later, the Battle of Marawi broke out.

In September 2017, I reported in the 1SRB and was designated as an S1 clerk typist, a position that later gave me an opportunity to know more about S1 functions and obligations. I believe that I can do what men can do; either in admin operations or in actual combat.

Our headquarters was stationed at Barangay Nanagun, Lumbanague, in Lanao del Sur, close to Barangay Butig, where majority of the Maute members are residents. We stayed there for almost 4 months and encountered different threats from the other side. My daily activities included serving at my duty post while preparing a foxhole for my safety, just like the rest of the senior NCOs. I was so happy when we transferred to Agus 2, Saguiran, Lanao del Sur, and abandoned that place.

Aside from my S1 responsibilities, I was also assigned as a Rear Support for the troops.  We were tasked to provide the troops in the frontline all the necessary needs as quickly as we could, such as food, medicine, water, ammunitions, and other equipment needed.  People and soldiers will never forget this historic battle that brought so much casualties, damages to property, and affected innocent civilians.

PFC SS Tolentino, from Pangasinan, is the only daughter of a retired policeman and a housewife. With a degree in nursing, Sarrah joined the Philippine Army driven her father’s exciting stories. Through her father’s inspiration she now proudly wears the army’s green uniform, decorated with the Scout Ranger badge. During the war she remembers another inspiring figure, her battalion commander, LTC Yunque. Before reporting to this unit, I was thinking what tasks or job would be waiting for me; what were their expectations and my expectations? But all I was expecting was that the morale and welfare of men and women of 1SRB would be kept and there should be equality among individuals in every task given.

As the day went by, I learned and gain knowledge, especially in operational matters, with the help of my seniors and officers, particularly LTC Yunque. I learned from his professionalism as a commander, how he delegated leadership to his men from the highest down to lowest rank in the unit. LTC Yunque always motivated his troops during the Marawi siege and emphasized his extraordinary rule, “Noody is left behind.” I salute him for the kind of leadership he had before, during, and after any event or movement of 1SRB.

In the journal of Private (PVT) RP Besana, 27, he remembers himself as a little boy who dreamt of becoming a soldier. Growing up in Lambayong, Sultan Kudarat, with his siblings, Basena was only able to finish high school because of financial problems. This did not dishearten him. Working hard, he was able to enter the Scout Ranger Training Course in 2016. He graduated in 2017. Fresh from training he recounts his experiences during the big war in Marawi. (On May 20, 2017, I was one of the people who joined the combat operation in the mountains of Bukidnon. The operation was aborted because there was a big war happening in Marawi City. We walked all night and even hurdled a lot of obstacles to get to the exit and help a group in need.

The first mission given to our battalion was to save the mechanized troup that couldn’t get out. I was scared, but we were all prepared to cross and rescue the people without leaving anybody behind. Even though I’m a tail scout, I contributed to saving them, aside from my duties of cooking every day, carrying bullets, medications, food, water, etc. It was a symbol of cooperation. It was proof I contributed something.

I learned not only the job of being a tail scout during the 5 months of the war, but being ready for any order from the officers and senior NCO. One must be wise, not just for the sake of oneself but for the entire group. One must be patient and obedient to any command without getting into trouble.

This carried a lot of unexpected things for beginners like us, but this is what will bring us in the right direction in our service. It will never be forgotten by any soldier. A lot of lives were lost and sacrificed. There are still a lot of things to learn and to address. I’m very grateful for the opportunity to be one of people involved in this war. I will carry this experience as I continue in my service, to never be complacent in anything I do.)

PVT JC Dechos, 24, from Surigao City, was a soldier in the making. With a bachelor’s degree in criminology, he joined the Reserved Officer Training Course and worked his way up until he reached and completed the Scout Ranger Orientation Course. As a fresh soldier, he has never encountered anything like the Marawi siege. My encounters in the battle of Marawi were extremely dangerous. I had never experienced going against the Maute-ISIS group, this was the first time. I was part of the support team and we were the ones who provided the daily needs of the battalion and company. We were also tasked to make sandbags, which were used as a shield for security and safety. It helped us maneuver during battle, and hide to avoid casualties and injuries. I am a tail scout and my main function was to cook for the team 3 times a day and to provide them whatever they needed.

If there is one thing to say about my team: we were united and we had camaraderie. Despite our different personalities, we became one for our mission. We did our best to avoid any casualty and injury. I can say that I’m proud to be part of this unit because I was able to surpass all the challenges and missions during the Marawi siege. No one is left behind, but everyone is lifted with the help of each other.

PVT JS Domingo, 25, from Bulacan, had a lot going on growing up, juggling different problems, one of which was financial. He was only able to finish high school because of his scholarship. Despite his problems, he never considered himself poor. He faced life with his head held high. He would jump from one job to another, but finally settled when he joined the rangers. (Obey orders, be strong. practice camaraderie, fight. These are some of the words I learned from Musang during my 7-month training with the Rangers, words that made a significant impact on my life as a soldier. During the first days of the Marawi siege, I was sent to the 1st SRB “Unbeatable,” where I experienced my first encounter with the ISIS-inspired group. I had experienced the Real McCoy for the first time during an encounter in Piagapo. It was an intense 5-day operation against the Maute group. However, it can never be compared with those 6 months of being in a war in Marawi City – a beautiful place wrecked by a long-drawn conflict.

I was with the Command Team. I was a tail scout. We were always exhausted, tired from having to stay up at night, and not taking a bath. Every day, there is a different story and a new struggle. But there is one thing that never changed: it is my prayer to our Father in Heaven. Like everyone else, we did beyond what was expected of us, even if we already had our hands full with various obligations, such as cooking, carrying bullets and weapons, flying a drone, keep watch at the post, rescuing wounded people, etc. We didn’t stop. It was if our body moved automatically before our minds told them to. I learned here how to sleep on time even when it’s not quiet in my surroundings, knowing that I would need to regain strength for the next day.

I saw each person show different emotions out there. Some were afraid. I remembered what my mentor said to me: it’s normal to have fear, because without fear you become complacent, and with complacency you set aside caution, and without caution trouble comes. What’s wrong is when you allow fear to get the better of you.

From this experience I also learned about the importance of leaders – those who lead not just by words but in everything else. They think and act both as rebels and associates. I also learned that emotions should not affect decisions, and there are emotions you should keep to yourself. There were like chess players who wanted to win without sacrificing. It’s true, the sweetest victory is a victory without sacrifice.)

PVT DH Gumuwang is a 22-year-old Igorot from Ifugao. Finishing only his high school, he traveled to Manila to pursue his dreams of becoming a soldier. He worked hard for a year at a water refilling station just to do it. After completing the training course he shares his story during the war as a tail scout. (The training I underwent before this was a big help, and it showed during the 5-month-long war in Marawi City. I was a tail scout. My leader was Ssg. Nacario. My task was not just to cook; I was all around: rescue wounded troops; carry bullets, medicines, food, and water; and, most importantly, sandbagging operation or what they called Task Force Birading.

For a couple of months inside the battle area, we were able to make and send almost 700 to 1,000 sandbags. Eventually, and until the end of the war, we were easily making thousands of sandbags every day. Yes, it was difficult, because there were just a few of us, but we were able to do it because of teamwork.

As a private, what I learned from this drawn-out war was to be vigilant and brave. Why be vigilant? This is a war, where one small mistake can cost you your life. There may be enemies in every road, every house, every corner, or every hole, even every floor. Hundreds of troops learned from this war, and many new recruits like myself will never forget this trial. To my company, who carried me through and gave me so I would learn as much as possible, especially my officers who are here, words are not enough [to thank you]. I hope you continue that good example you have set for novices people like us.)