Boracay may open in less than 6 months – DENR chief 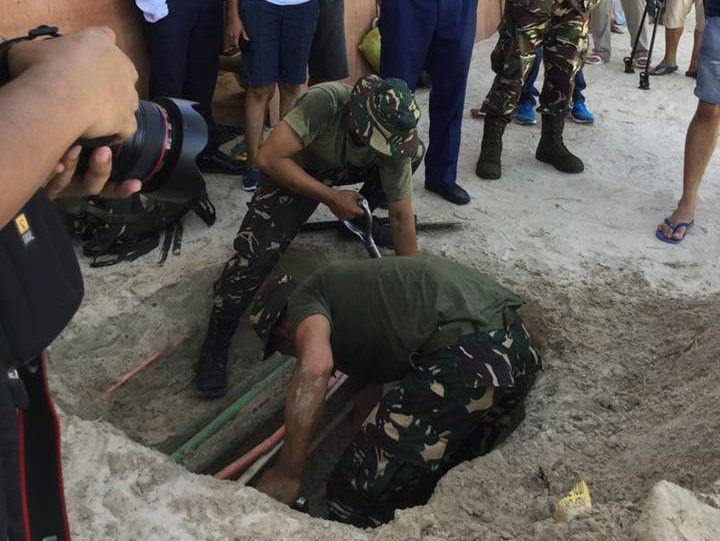 Facebook Twitter Copy URL
Copied
This comes after the government discovered 16 establishments that had installed their own pipes, which flush wastes directly under the beachfront

MANILA, Philippines – Exactly a month after the island was closed to tourists, Environment Secretary Roy Cimatu said on Saturday, May 26, that top tourist destination Boracay may open in less than 6 months.

Referring to the erring establishments, Cimatu said, “We are almost sure na wala nang iba. (We are almost sure that there’s nothing else.) I was very happy yesterday that the military was able to find the culprit.”

This comes after 100 trainees from the 3rd Infantry Division of the Philippine Army on Friday, May 25, helped the Department of Environment and Natural Resources (DENR) in excavating illegal pipes along the 4.5-kilometer White Sand Beach.

The activity led them to discover 16 establishments that had installed their own pipes, which flush wastes directly under the beachfront.

Cimatu earlier said that the rehabilitation efforts might have to extend beyond 6 months.

A team from the Mines and Geosciences Bureau conducted a survey along the White Sand Beach using a ground penetrating radar. It discovered 43 sites where illegal pipes have been buried.

But with the help of the military, Cimatu said the excavation of pipes was fast-tracked.

“If we were not able to do this, it would have been a problem. Good thing that it was solved,” Cimatu said in a mix of English and Filipino.

Cimatu said that an investigation on the establishments will be done.

“We are still validating but the big hotels are defiant. The DENR Central Office’s Pollution Adjudication Board will handle this,” he said.

The environment secretary said that the establishments will have to face the consequences, should the Board sanction them.

President Rodrigo Duterte ordered the closure of Boracay Island for 6-months starting April 26 because of environmental problems. A pipe in Bulabog Beach used to release wastewater straight to the sea, which led to the President calling the island a “cesspool.”

Establishments and households not connected to sewerage treatment plants triggered the increase of water pollution to extreme levels, especially during summer months because of the large number of people who flock to the world-famous island resort. (WATCH: How green can Boracay get?)

Improving Boracay’s sewerage system is among the government’s rehabilitation priorities. (READ: CHEAT SHEET: What to expect from Boracay closure) – Rappler.com