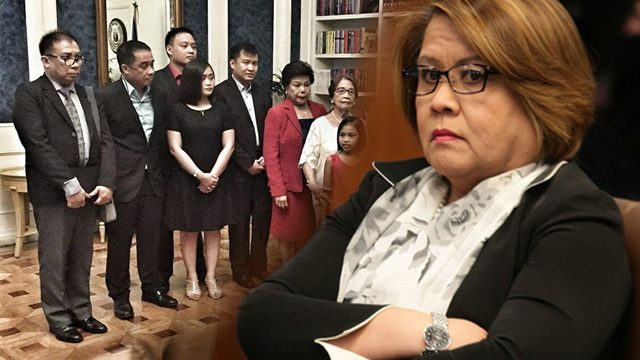 Presiding Judge Amelia Fabros-Corpuz denied the motion, saying the senator could not be treated differently.

On May 15, De Lima filed a very urgent motion for furlough before Muntinlupa City RTC Branches 205 and 206, with a request to be given at least two more hours at the end of the ceremony for some personal time with her family.

De Lima said her son Vincent Joshua Bohol is set to graduate with a law degree from San Beda College Alabang. The graduation rites are scheduled from 2 pm to 7 pm on Sunday.

The prosecution, however, opposed the request, saying De Lima’s presence is “not indispensable” and would be disruptive.

The prosecution also said the risk of flight is “very high,” even as De Lima assured the court she has no intention of escaping.

For the court, the arguments of the prosecution are “persuasive.”

The court, in its decision, said De Lima’s presence during the graduation ceremony “will disrupt the solemnity of the said occasion not only for the other attendees and parents, but also for her son who will celebrate the momentous occasion.”

It also said De Lima’s presence “will endanger the security of San Beda College Alabang and its constituents, as well as the village where it is located.”

The court suggested that a relative could just take a video of the graduation rites, for De Lima to watch in her detention cell.

“Moreover, accused De Lima’s family may celebrate the occasion with her in Camp Crame during visiting hours, even during the same day, if they wish to, without endangering themselves or other people,” it added.

In her plea, De Lima earlier cited how the Supreme Court (SC) and the Sandiganbayan granted furloughs on special occasions and for personal matters.

De Lima specifically cited the case of former senator Jinggoy Estrada, then detained at the Philippine National Police Custodial Center in Camp Crame, who was allowed by the Sandiganbayan to attend the high school graduation of his son.

De Lima said her son is set to take the Bar Exams in November. – Rappler.com