MANILA, Philippines (UPDATED) – In a historic move, the House of Representatives approved the proposed Bangsamoro Basic Law (BBL) on Wednesday, May 30.

Voting 227-11-2, lawmakers approved the still unnumbered bill substituting House Bill (HB) No. 6475, which seeks to abolish the Autonomous Region in Muslim Mindanao (ARMM) and replace it with the Bangsamoro region.

The approval, done on the last day of session, was swift. House Majority Leader Rodolfo Fariñas moved to replaced HB 6475 as a whole with the substitute bill and no lawmaker contested him. The period of amendments was immediately closed.

Soon after, the BBL was put up for viva voce voting for 2nd reading. A majority of lawmakers said aye, signaling the bill’s approval on 2nd reading. (READ: Mindanao lawmakers: ‘A vote for Bangsamoro is a vote for Filipinos’)

Lawmakers then conducted nominal voting during the 3rd and final reading. Most of the legislators either gave a thumbs up to signify their yes vote, while others went up to the microphone to say no or to abstain from voting.

The approved substitute bill contained the amendments lawmakers wanted to make to HB 6475 after holding 3 all-members caucuses in the past two weeks. House leaders also met with the Bangsamoro Transition Commission and government officials twice.

These meetings were closed to the public. Speaker Pantaleon Alvarez and Zamboanga City 1st District Representative Celso Lobregat, however, faced the media after the 3rd all-members caucus held on Wednesday.

Some of the major amendments to the BBL that district representatives are proposing include:

These amendments, including the controversial provisions lawmakers believe to be unconstitutional, will be tackled during the bicameral conference committee meetings to be held during Congress’ break starting next week.

The House was able to approve the BBL on 2nd and 3rd reading on the same day after President Rodrigo Duterte certified the bill as urgent. 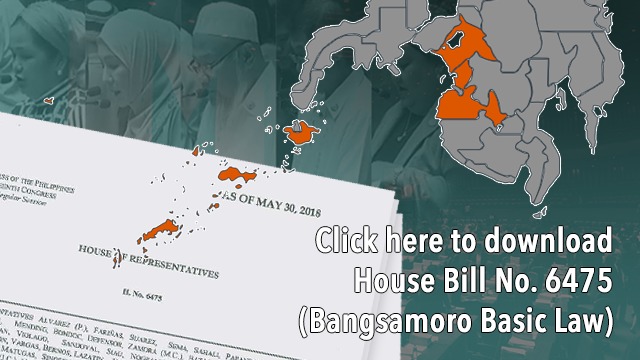