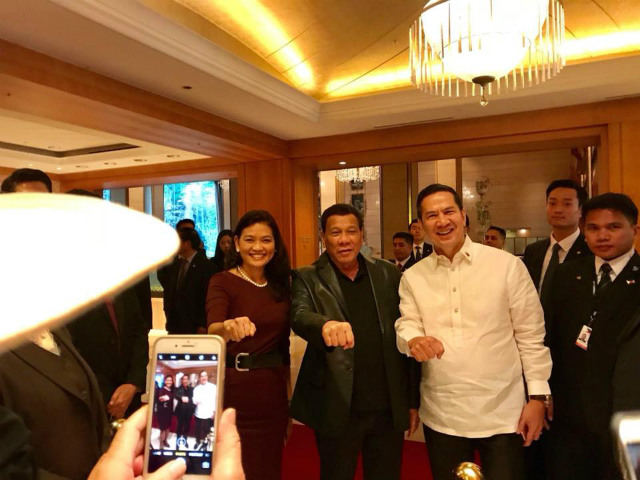 MANILA, Philippines – President Rodrigo Duterte arrived in South Korea on Sunday morning, June 3, for a 3-day official visit that includes talks with South Korean President Moon Jae-In and a meeting with the Filipino community there.

Philippine Ambassador to South Korea Raul Hernandez said Duterte arrived in Seoul at around 5:20 am on Sunday.

Duterte will kick off his official trip by meeting with the Filipino community at the Grand Hilton Hotel and Convention Center late Sunday afternoon.

On Monday, June 4, Duterte will meet with Moon at the Blue House. Duterte had said he will seek “greater partnership” in defense and security, trade and investment, and political cooperation during his meeting with Moon.

The Philippines earlier said 4 documents will be signed during Duterte’s trip. These include a loan agreement on the new Cebu International Container Port Project and other memoranda of understanding on transportation, science, and economics.

“The news of the President’s visit was enthusiastically welcomed by members of the Filipino community in South Korea,” Hernandez said in an interview uploaded by RTVM.

“We did not expect that there will be a lot of people who wanted to see the President here in South Korea, and therefore we probably need a bigger venue, maybe a stadium or a big Olympic-sized stadium, when he visits in another time,” Hernandez added.

He said most Filipinos in South Korea work in factories, construction, and the service industry. Others serve as household helpers, professors, performers, and missionaries, among others.

In the 2016 elections, Filipinos in South Korea “gave 84% of their votes” to Duterte, Hernandez said. – Rappler.com