Jun 27, 2018 8:00 AM PHT
Pia Ranada
Facebook Twitter Copy URL
Copied
Rodrigo Duterte has broken his promise to 'behave' as president and to sail to Philippine Rise. But he has thrown support for pro-poor policies and increased the pay for soldiers and cops. Read on for an update on presidential promises.

MANILA, Philippines (UPDATED) – On June 30, 2018, the Philippines will have experienced two years under Rodrigo Duterte – or a third of his presidential term.

The first year was a kickstarter, a taste of what 6 years under the longtime Davao City mayor would be like. At the end of 2017, we reported that Duterte got started on most of his key campaign promises.

There are also promises for which Duterte pursues contradictory actions, leaving the public to wonder whether he means what he says. 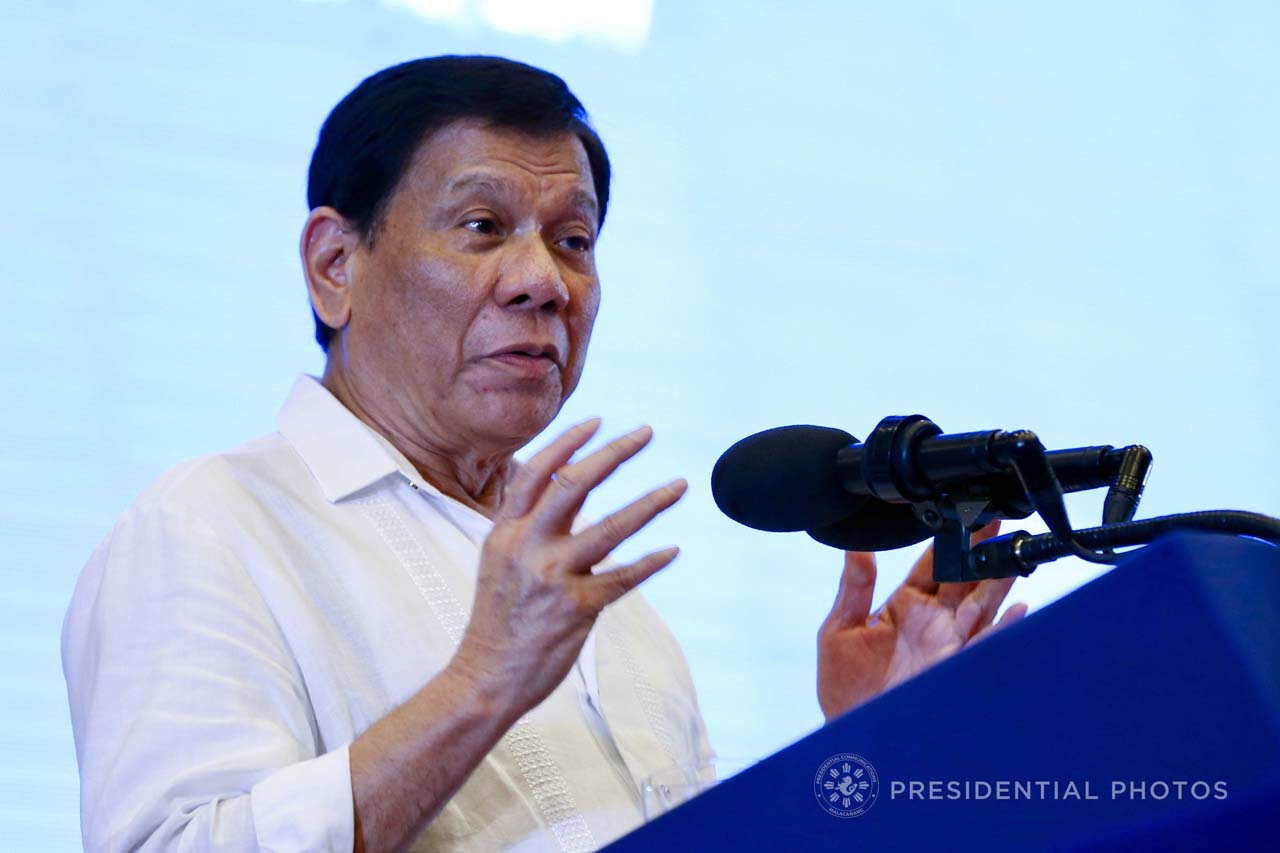 A month before he took his oath as president, Duterte promised to stop cursing so much and to “behave,” out of respect for the Philippine presidency. Two years later, Duterte rarely gives a speech without several curse words. His foul-mouthed tirades against critics, his off-color jokes, and misogynistic remarks are now a defining feature of his presidency. (READ: Duterte’s cursing is affecting our youth, experts say) 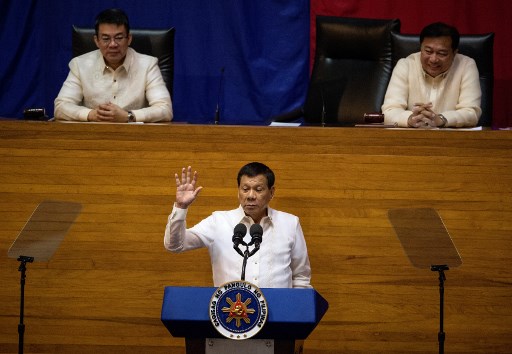 Broken promise: ‘I will start the national healing’

On the day he won the presidency, Duterte offered an olive branch to his opponents and promised to “start the healing” of a nation divided by ferocious election politics.

“Let’s begin to forget and start healing. I would like to reach the hands of my opponents. Let us be friends. Forget about the travails of elections,” he had said on May 9, 2016.

Two years into his presidency, Duterte likes to use his public speeches to insult political opponents and critics. His claims about opposition senator Leila de Lima led to her arrest. He speaks of destabilization plots by the once-dominant Liberal Party. Mocha Uson, a controversial blogger who fanned flames of hatred against his political rivals, is now an assistant secretary with a government platform for her brand of propaganda. 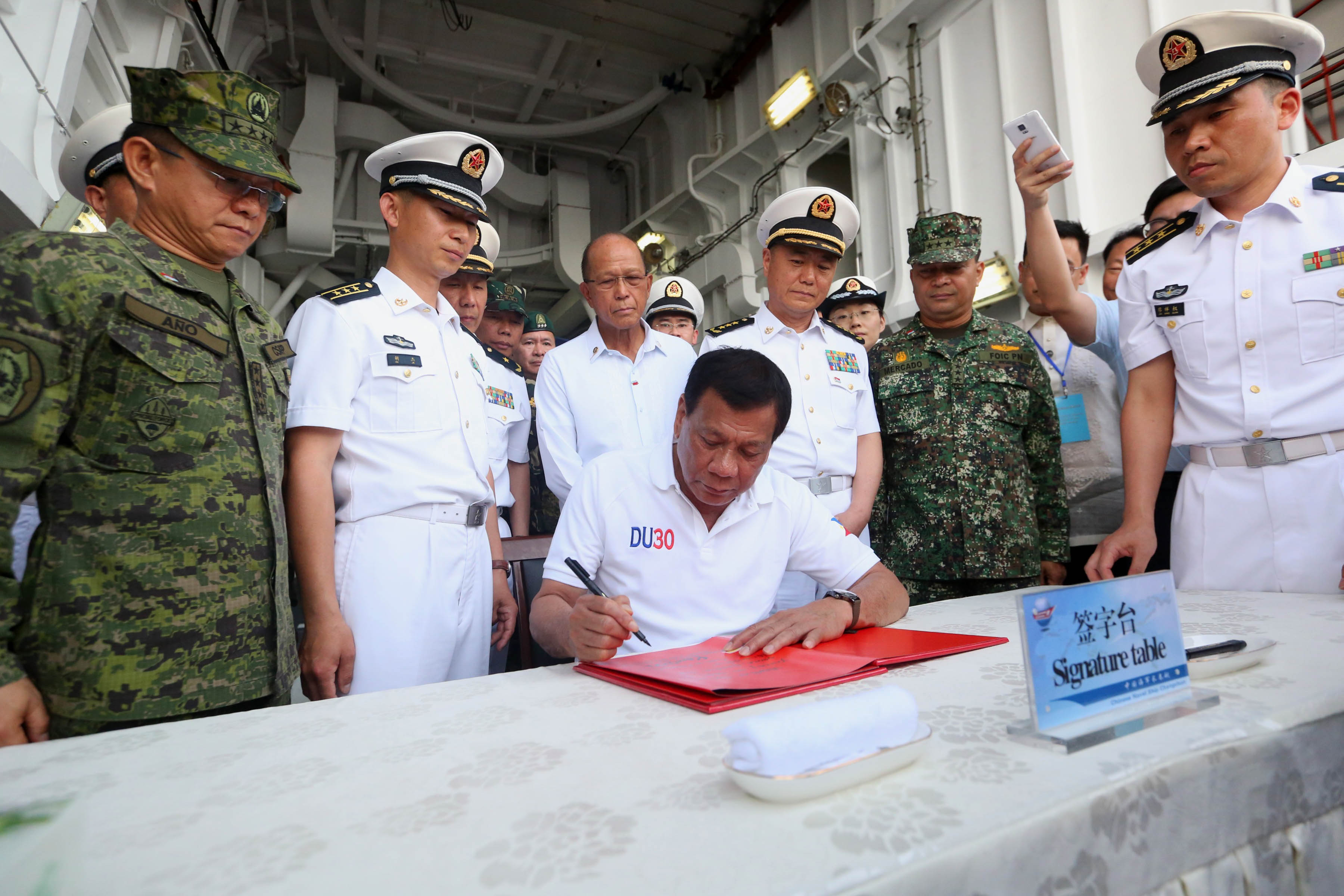 Duterte promised he would eventually assert the historic ruling the Philippines won against China during the previous administration. Two years of his administration have come and gone – marked by worrisome incursions by Beijing in the West Philippine Sea – and Duterte continues to shelve invoking the ruling for later. Except nobody knows when “later” is. 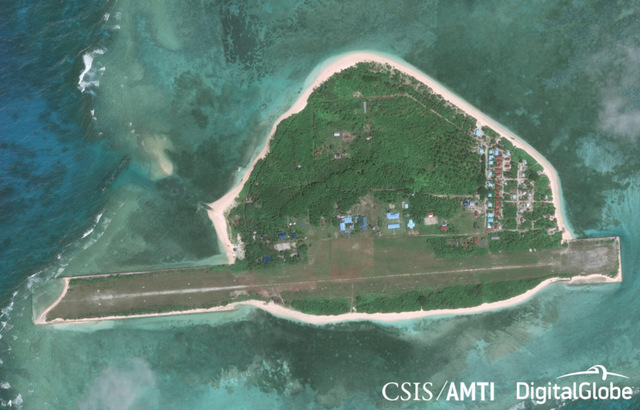 During his candidacy, he famously promised to ride a jetski to the Spratly Islands and plant a Philippine flag there. In 2017, he repeated that promise, saying he would do it on Philippine Independence Day. Two months before the occasion, he canceled his plan, admitting China asked him not to do it.

However, Duterte has greenlighted the repair of military facilities in Pag-asa Island, the largest Philippine-administered island in the Spratlys. 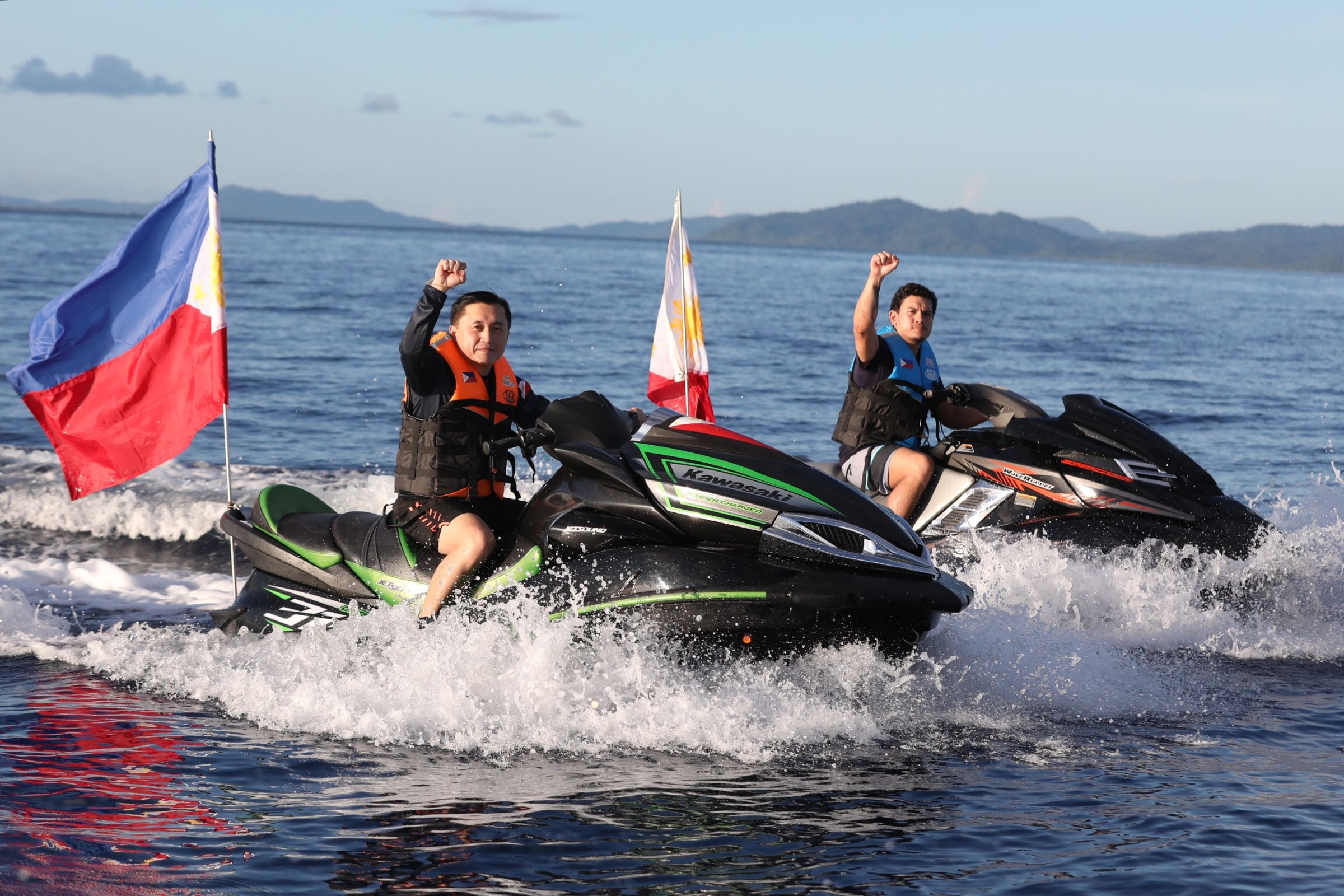 Duterte made a similar promise to sail to Philippine (Benham) Rise, a vow that was not supposed to be controversial anyway because no country is contesting the Philippines’ claim to the resource-rich continental shelf. Come this May, things appeared to be all set, with media asked to cover Duterte’s visit there. But it proved to be a mere publicity stunt as Duterte only gave a speech aboard a Navy boat docked in Casiguran Bay in Aurora province and left before the vessel could sail to Philippine Rise. His youngest son Sebastian, and his aide Bong Go, did go on a jetski ride, but only around Casiguran Sound. 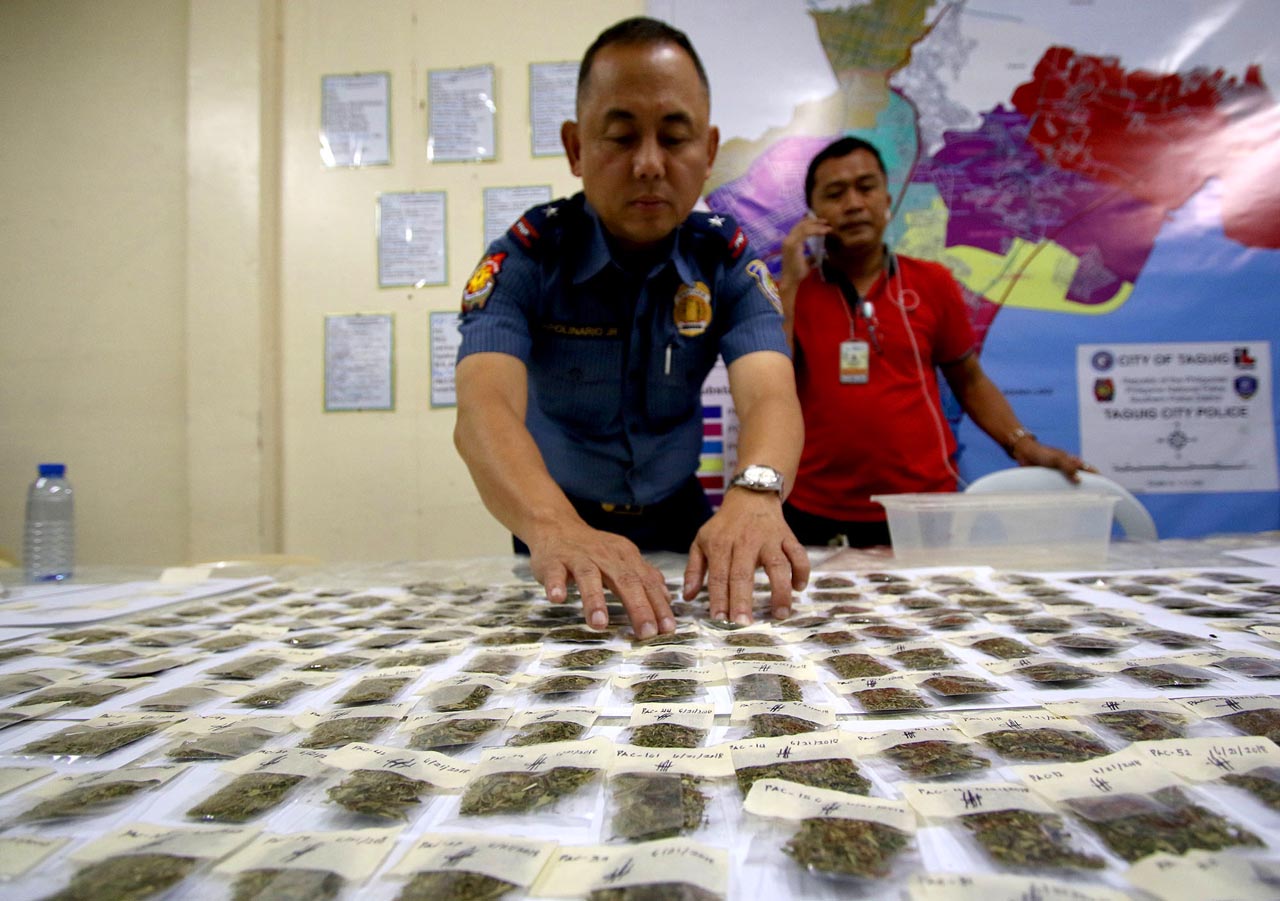 Mixed fulfillment of promise: Sparing no one in drug war

The campaign against illegal drugs remains the Duterte administration’s banner program. Thousands have been killed in police anti-drug operations. Majority of Filipinos continue to support the program but have persistent concerns on human rights abuses. Surveys have found that most Filipinos want drug suspects arrested alive and half of Filipinos don’t believe police claims that suspects had to be killed because they “fought back.”

Despite the government’s efforts, fears about crime and public safety remain and notably even rose in Duterte’s home island of Mindanao. Days before wrapping up his second year in office, Duterte again stoked fears with an order to the police to round up tambays (loiterers).

But observers point out that it’s mostly low-level criminals who are targeted, with not as many “big fish” netted.

In the middle of Duterte’s second year in power, there was a drop in crime, including murder – but the number of homicide cases rose. Police documents show that 33 people have been killed daily in the last two years.

Then priests started to get murdered. In the last 6 months, 3 priests have been shot dead. 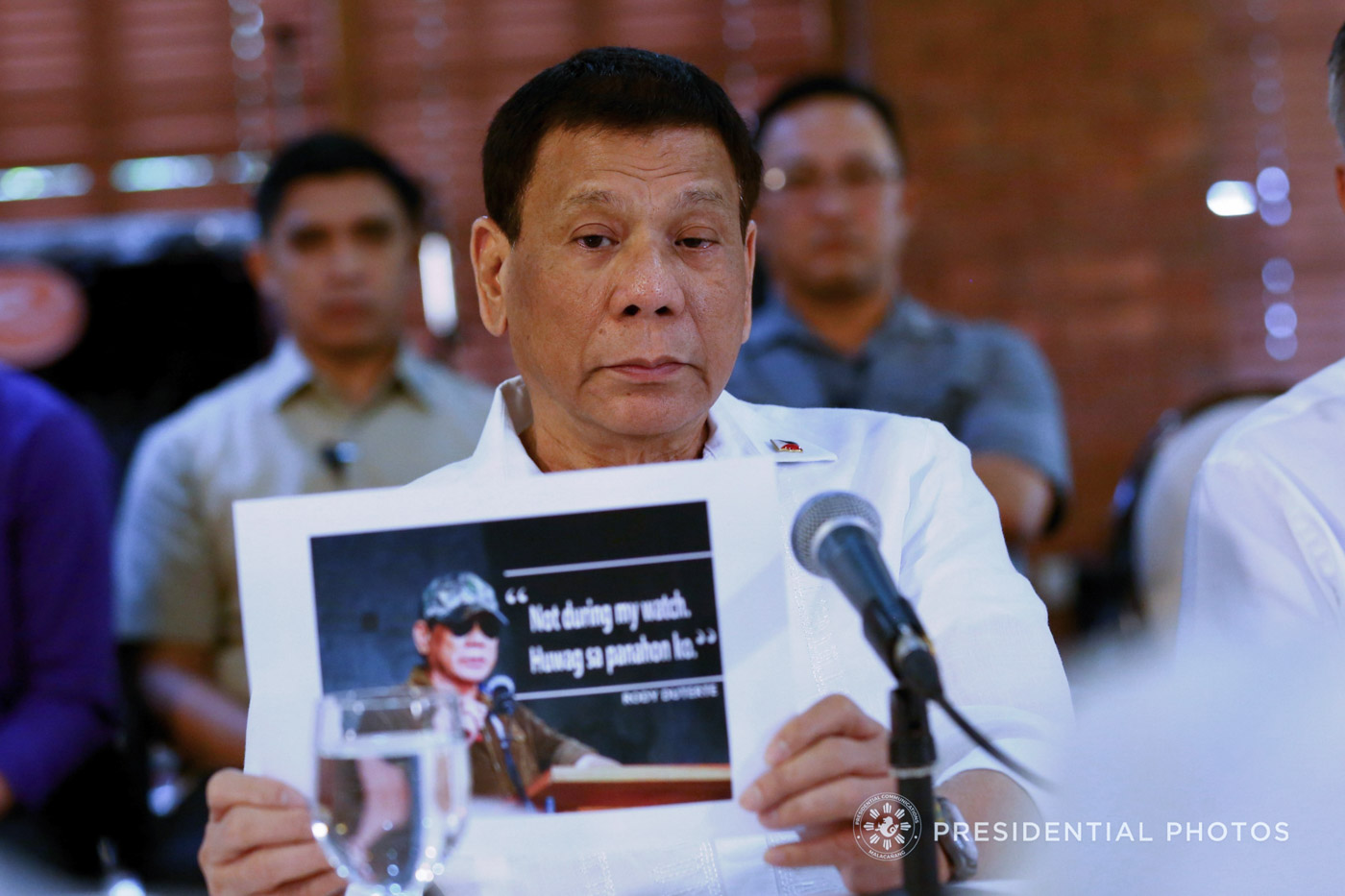 Mixed fulfillment of promise: ‘Even just a whiff of corruption, you’re out’

Duterte likes to say he has fulfilled this promise since he has been firing his own appointees “left and right.” What he and his spokesmen fail to explain, however, are the officials who end up reappointed despite corruption allegations against them. In Rappler’s tally, there are 16 such controversial reappointees. Meanwhile, 20 persons he has fired for corruption or misuse of public funds have yet to face formal charges. 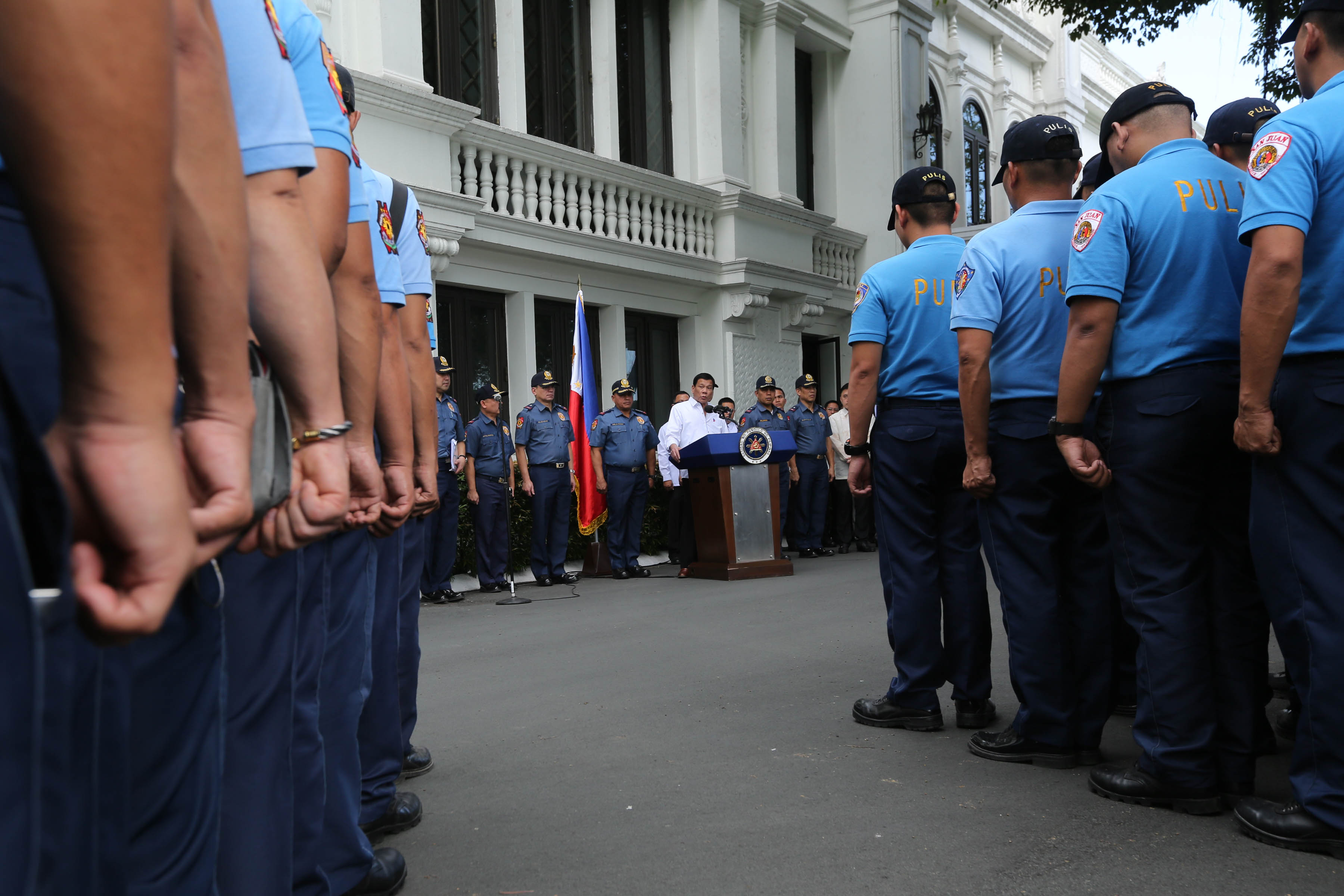 Mixed fulfillment of promise: ‘Abusive cops will be punished’

The death of teenagers at the hands of the police led Duterte to declare a campaign against dirty cops. While Malacañang and the Philippine National Police made a big show of Duterte berating some errant cops in the Palace driveway, the President has also chosen to reinstate the likes of Marvin Marcos, who supervised the cops whom government investigators concluded murdered Rolando Espinosa, father of an alleged drug lord, in his jail cell. He has also praised police for high death tolls in major drug raids. With no protest from him, the PNP has promoted controversial cops like Chito Bersaluna and Roberto Fajardo. 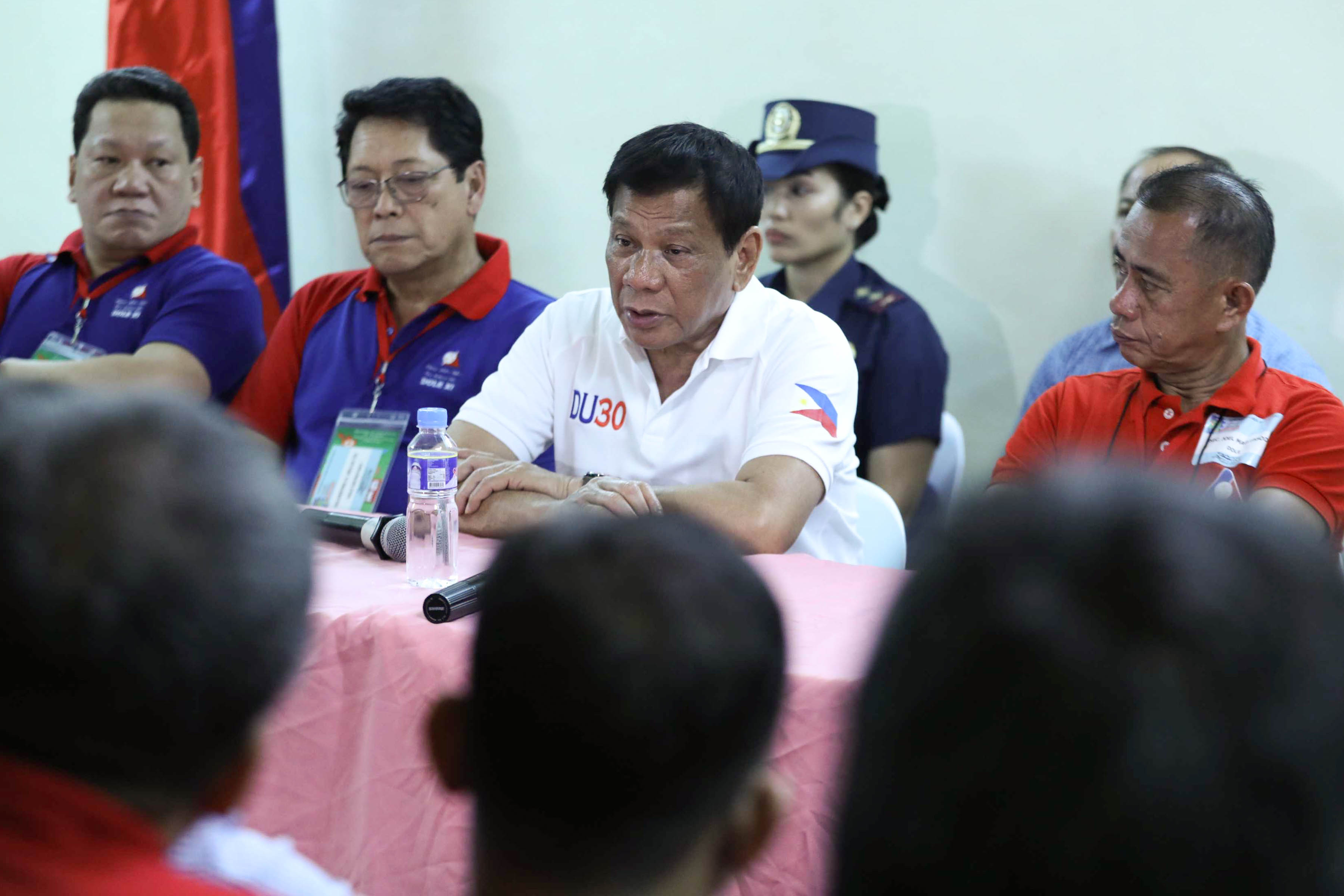 Duterte has done little more than order the stricter implementation of laws and regulations against already illegal forms of contractualization, like “end of contract” arrangements.

His long-awaited executive order on contractualization was rejected by labor groups since it brought nothing new. Duterte did not include there the phrase that would make direct hiring the norm in employer-employee relations, something labor groups have long been clamoring for.

He admitted his powers are limited. To end all forms of contractualization, he said, Congress needs to amend the Labor Code. 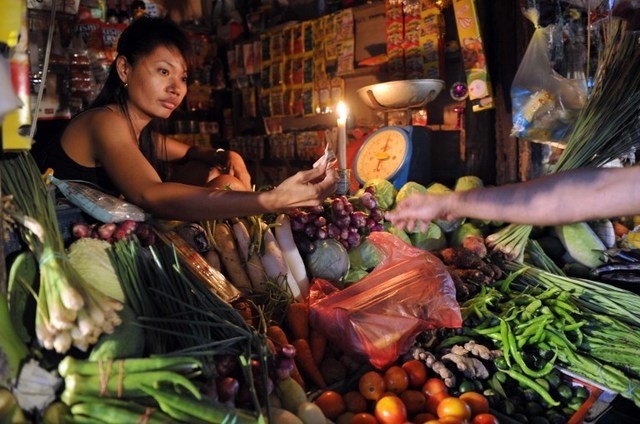 Duterte promised in 2016 that, aside from fighting criminality, he would ensure “there is food on the table and it is affordable” for all Filipinos. But there have been bumps along the way. A spike in inflation rate has made goods, including food, more expensive.

While the administration’s tax reform program has contributed to the rise in inflation rate, it’s also caused by external factors, such as the increase in global oil prices.

Prices of rice, a daily staple for Filipino households, have also risen. Lawmakers and Duterte’s own economic managers blame the National Food Authority for this. The NFA blamed Cabinet Secretary Leoncio Evasco Jr. In the end, Duterte sided with the NFA’s Jason Aquino by clipping Evasco’s powers over the agency. Lawmakers said it was the wrong decision. 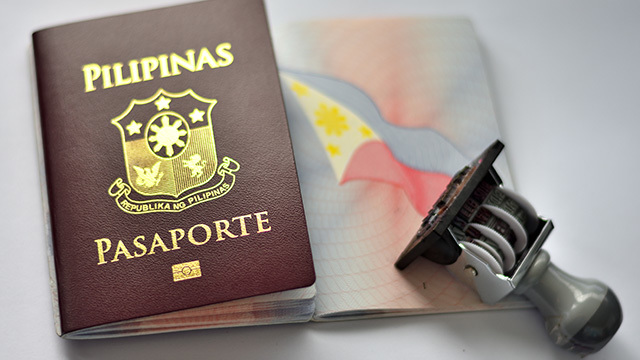 Only a few days after first making this promise during his second State of the Nation Address in 2017, Duterte signed the two laws that extended passport and driver’s license validity. 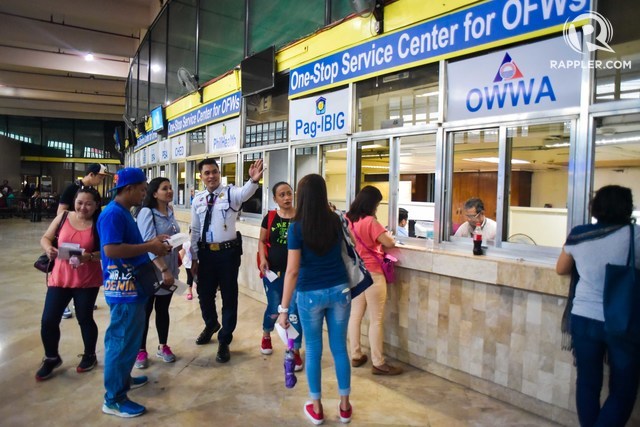 Duterte also signed the Ease of Doing Business Act, which mandates government offices to process transactions within days and introduces a “zero contact” policy to reduce the likelihood of corruption. It’s similar to anti-red tape practices implemented in Davao City when he was mayor. The law also creates a one-stop shop for government permits so that businessmen no longer need to visit separate government offices for separate permits. The government also put up a one-stop shop for overseas Filipino workers.

Duterte made good on his promise to help the poor by affixing his signature to laws that directly benefit low-income families, sometimes against the advice of his economic managers.

Through the signing of laws, Duterte has greenlighted free college tuition, free irrigation, free internet access in public places, tougher sanctions for hospitals demanding deposits, and more accessible and affordable mental health services. Lawmakers at the Senate and the House put in much of the work for these laws, which happened to dovetail perfectly with Duterte’s populist stance. 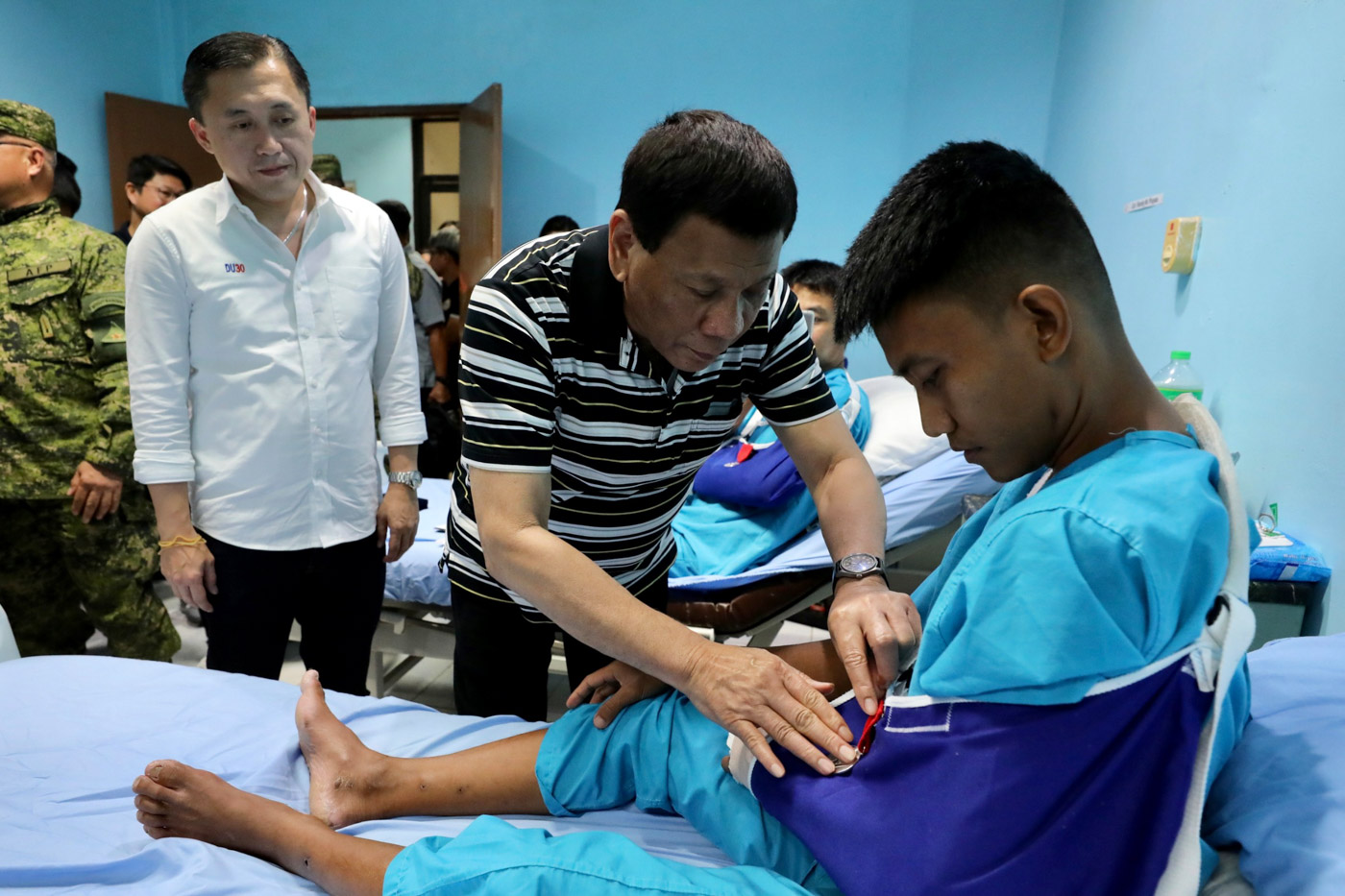 Fulfilled promise: ‘I will double salaries of military, police’

Through an executive order, a joint resolution, and budget allocations, Duterte has managed to increase the take-home pay of soldiers and police – one of the more specific promises he made during his presidential campaign. 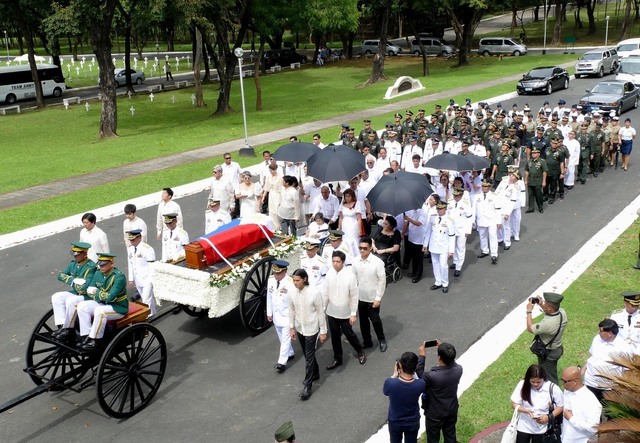 Fulfilled promise: ‘I will allow Marcos’ burial in the Libingan ng mga Bayani’

This promise, made during a campaign sortie in the late dictator’s hometown in Ilocos Norte, was among the first to be fulfilled. Less than two months into the presidency, Duterte greenlighted the burial of Ferdinand Marcos at the Libingan ng mga Bayani which took place on November 18, 2016. Duterte later on said in speeches that he owes Ilocos Norte Governor Imee Marcos a debt of gratitude for his 2016 electoral victory. 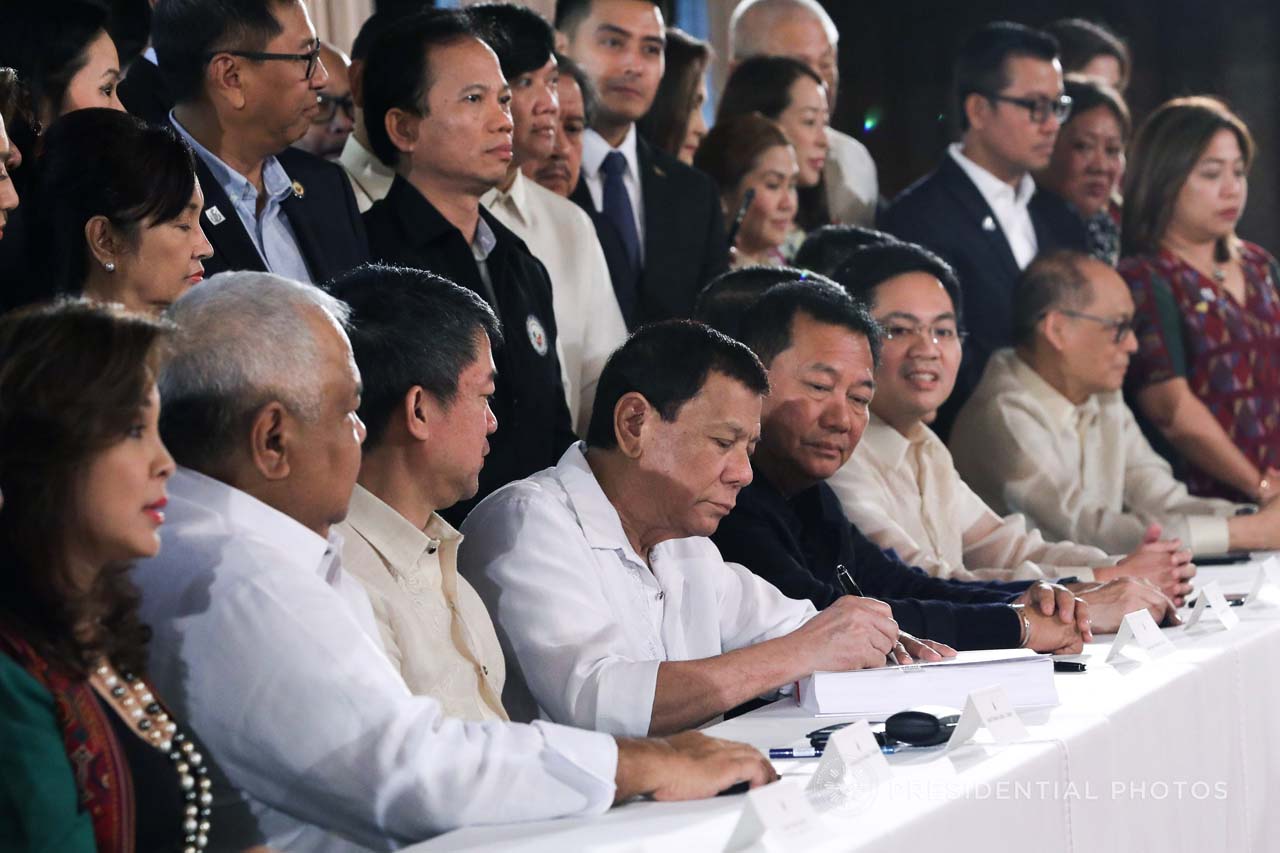 Duterte has supported populist policies, but he has also waved the banner for his economic managers. After he certified it as urgent, the first package of tax reform was passed by Congress. The new law reduces personal income tax but imposes higher tax on fuel, sugary drinks, cars, tobacco, and cosmetic surgery.

Tax reform was Duterte’s most critical economic campaign promise, which he made largely at the urging of Finance Secretary Carlos Dominguez III. But the law’s passage and initial implementation at a time of rising oil prices in the world market has contributed to inflation. Two more tax reform packages await Congress’ approval and Duterte’s signature.

There are some promises that involve long processes, requiring the participation of Congress and other groups. Chief among these are Duterte’s promises to shift the Philippines to a federal system of government, end the communist insurgency, and to ensure the passage of the proposed Bangsamoro Basic Law (BBL).

At this point, we will have to wait longer to assess if Duterte will fulfill these vows or not. However, some strides have been made. The BBL is now in the final stages of the legislative process and could be passed in time for Duterte’s upcoming State of the Nation Address on July 23. Duterte’s consultative committee is set to submit its draft federal constitution, also in July. As for peace talks with the Left, Duterte has expressed openness to resuming negotiations. – Rappler.com