Jun 22, 2018 1:34 PM PHT
Eloisa Lopez
Facebook Twitter Copy URL
Copied
The family and lawyer of Adell Milan present CCTV footage showing the primary suspect in the murder of Fr Richmond Nilo in another town less than an hour before the priest is killed 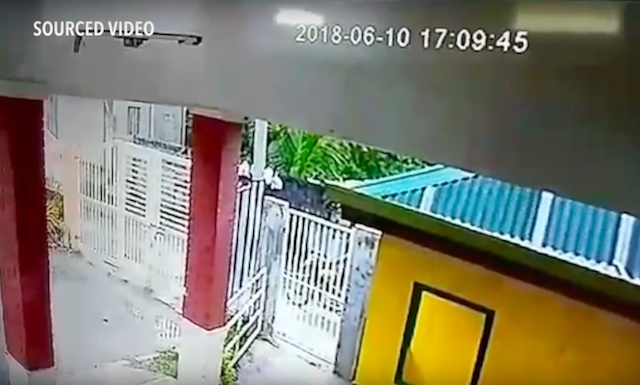 MANILA, Philippines – Family and friends of the primary suspect in the killing of Fr Richmond Nilo spoke in a forum in Quezon City on Friday, June 22, to assert the innocence of Adell Milan using CCTV footage taken in a place far from the crime scene.

The family’s legal counsel, Lorenzo “Larry” Gadon, presented to the media CCTV footage that showed Milan riding his motorcycle outside T. Ador Dionisio National High School, captured less than an hour before Nilo was gunned down. The timestamp on the footage is 5:09 pm.

The school is located in San Isidro town in Nueva Ecija. Nilo was killed at 6:05 pm, as he prepared for early evening Mass at the Nuestra Señora de la Nieve Chapel in Barangay Mayamot, Zaragoza town. The distance between the school and the church is said to be around 25 kilometers.

Milan’s grandmother, Elena Matias, said it was simply impossible for Milan to be at the crime scene, given the distance. (READ: PNP got the wrong guy – grandma of arrested suspect in Fr Nilo murder)

Milan’s friends also told reporters that they were with him on the night he supposedly killed the priest.

Matias also said that when Milan was arrested, armed men in civilian clothes – not policemen – forcibly took him. She said the men did not introduce themselves before entering their lot, and did not present any warrant of arrest.

Gadon said he will look into the case starting Sunday to give the police time to “realize” that they got the wrong man.

He added that a lone witness should not be enough reason for Milan to be considered the prime suspect.

If proven a fall guy, Gadon said he will work on Milan’s release, and for charges against the suspect to be dropped. He said he will also investigate if the police followed the proper procedures in arresting Milan.

Asked if he would file a case against the police, Gadon said it was too early to make this decision. “We do not want to preempt,” he said in Filipino.