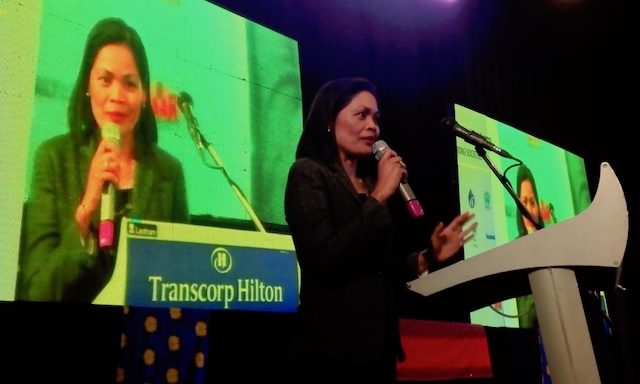 ABUJA, Nigeria – At its world congress held in this city, the International Press Institute (IPI) on Friday, June 22, gave Rappler the 2018 Free Media Pioneer award for its “innovative approach to journalism and audience engagement” and the company’s “determination to hold authorities accountable despite aggressive attacks on its operations.”

Managing editor Glenda M. Gloria received the prestigious award on behalf of Rappler, saying that the honor belongs not just to Rappler and Filipino journalists but also to “everyone all over the world who persists in doing good journalism despite being harassed, despite getting jailed, and despite their work getting hijacked by algorithms.”

It is the 5th award received by Rappler in the last two months.

The IPI established the Free Media Pioneer award in 1996 to recognize innovation in journalism that has promoted access and quality in the news industry. For the past 4 years, the award has been given in partnership with Copenhagen-based International Media Support (IMS).

In a previous statement, IPI executive director Barbara Trionfi  said Rappler’s “commitment to critical reporting and embrace of bold new techniques of engaging with audiences has transformed it over an incredibly short period of time into a journalistic heavyweight in the Philippines.”

“Rappler deserves to receive the Free Media Pioneer award,” said IMS executive director Jesper Hojberg. “Despite escalating threat levels and impending lawsuits, Rappler’s journalists have continued to do what they do best: produce and distribute good quality journalism. Rappler is a leading light in a region where the space for freedom of expression is shrinking. With this award we recognize its tremendous courage and show our support for its important work.”

In accepting the award, Gloria recalled the various forms of harassment faced by Rappler since President Rodrigo Duterte assumed power in 2016, which culminated in a Securities and Exchange Commission (SEC) order last January revoking Rappler’s license to operate. The SEC decision is pending with the Court of Appeals.

“The thousands of deaths in the name of the drug war and the climate of fear that seeks to paralyze the democratic institutions of what used to be Asia’s most vibrant democracy and freest press, give us no choice but to stand our ground,” Gloria said. She cited a popular quote from Nigeria’s Nobel Laureate Wole Soyinka, who was the ceremony’s special guest. “The man dies in all who keep silent in the face of tyranny,” Soyinka had written.

The IPI also gave the IPI Press Freedom Hero award to Angola’s detained journalist, Rafael Marques, who appeared at the ceremony in a video message.

Trionfi praised Marques “for his dedication to the pursuit of truth in an unforgiving environment for press freedom.”

“Despite Angola’s systematic repression of independent media, Rafael Marques has managed – at great personal risk – to bravely and persistently shine a light on abuse of power at the highest levels,” she said.

The IPI is a global network of editors, media executives, and journalists dedicated to defending press freedom.

At the opening of its world congress at the presidential palace on Thursday, June 21, IPI executive board chair John Yearwood urged Nigerian President Muhammadu Buhari to use his powers to release Jones Abiri, a Nigerian journalist who disappeared two years ago and is believed to be held by the Department of State Security.

“We hope that (Abiri) will be with us as a free journalist at our next gathering,” Yearwood said.

On Friday, the IPI also called on authorities to free journalists who are detained in Turkey, Egypt, and Myanmar, among other states. – Rappler.com