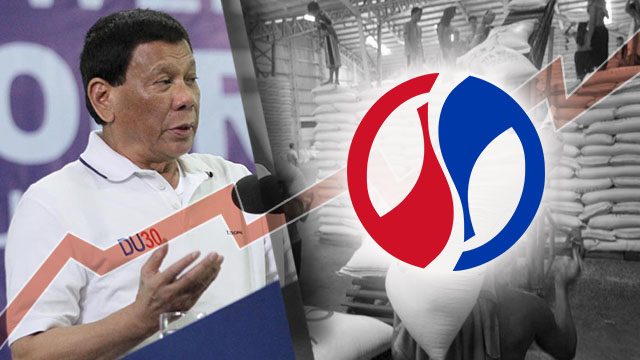 Facebook Twitter Copy URL
Copied
Poor families suffer for almost half of the year, as they are left with no choice but to buy regular and well-milled rice

MANILA, Philippines – Affordable rice from the National Food Authority (NFA) finally started to arrive in local markets. Consumers could now buy NFA rice at P27 to P32 per kilo, as some 250,000 metric tons (MT) of rice from Vietnam and Thailand arrived in ports.

However, poor families already suffered for almost half of the year, as they were left with no choice but to buy regular and well-milled rice.

Data from the Philippine Statistics Authority (PSA) revealed the rapid surge of prices in both regular and well-milled rice, as the NFA rice supply started to get depleted. The average price of regular milled rice peaked in the second week of April at P39.97 per kilo, 7.88% higher compared to the same period in 2017.

Meanwhile, the average price of well-milled rice reached as high as P44.11 per kilo in June, 5.58% higher year-on-year.

Prices started to soar by the last week of March. The NFA announced in April that they had zero buffer stocks. (READ: NFA rice shortage: Whose fault is it?)

The acceleration of rice prices, along with other basic commodities and oil, as well as the implementation of the Tax Reform for Acceleration and Inclusion (TRAIN) law, contributed to the spike in inflation, which clocked in at 4.6% in May. The figure is outside the government’s annual target of 2% to 4%.

Budget Secretary Benjamin Diokno did not mince words and blamed the NFA for partly causing the surge.

(First, the price of fuel increased in the world market and we cannot control that. Second, the price of rice went higher not because of TRAIN. It was because of the incompetence of people in the NFA.)

NFA Administrator Jason Aquino responded: “The depletion of NFA rice supply was not a result of NFA’s inefficiency or the incompetence of its officials. It was the consequence of a difference in views and appreciation of how the NFA mandate is supposed to be done.” (READ: Who is NFA chief Jason Aquino and why is he controversial?)

The NFA chief said instead of pointing blame, all should just “help each other find the right and immediate solutions.”

While rice prices are expected to stabilize within the next weeks, several questions remain: What is the root cause of the shortage? And what measures are in place to prevent it from happening again? Trouble in the NFA started to catch the media’s attention when the turf war between Aquino and Cabinet Secretary Leoncio Evasco Jr, who then headed the NFA council, started to heat up. (TIMELINE: Clashes between Evasco and NFA’s Aquino)

The deal was one reason why there was a sudden decline in NFA’s buffer stock in Eastern Visayas.

Valdez said she respects Duterte’s decision, but appealed to him to look into the “NFA syndicate.”

In November 2017, Aquino called for a government-to-government (G2G) importation of 250,000 MT of rice because of dwindling buffer stock.

By January 2018, local markets started to notice the short supply of affordable rice, which prompted the senate to investigate. During the Senate inquiry, Aquino revealed that the agency has only less than two days’ worth of buffer stock – a far cry from the required 15-day stock.

Senator Cynthia Villar, chair of the Senate committee on agriculture and food, slammed Aquino for causing the panic.

(You should have buffer to make sure traders would not take advantage of the farmers. You’ll say there’s no NFA rice but it’s your job. Why are you announcing that you could not do your job?)

Villar said she thinks Aquino is trying to force the NFA Council to give him authority to import rice.

The NFA chief told senators that the shortage was due to the low farm gate price ceiling of the government and the absence of rice importation to counter it.

He said the agency could not procure rice grains from local producers due to the low price of P17. Farmers, he said, would rather sell their products at a higher price to middlemen.

Senators also questioned Aquino for not procuring grains from specific provinces from October to December 2017 to take advantage of their low prices.

But Aquino said they could not find the said cheap grains, and said these usually do not meet the standard of dry grains with only 14% moisture content

Despite the many controversies hounding Aquino, he continues to enjoy the trust and confidence of Duterte. On April 17, Duterte transferred the NFA under the wing of the Department of Agriculture (DA), effectively booting out Evasco as council chairman.

Minority Senator Francis Pangilinan, who headed the NFA Council under the previous administration, questioned the decision.

(How come the one with the clean track record and who was investigating illegal acts in the NFA was removed, while they sided with those involved in corruption?)

In a speech on June 13, Duterte said he took away Evasco’s powers because he was “too short-sighted” on the issue of rice supply and was engaged in a “turf war” with other officials.

“We had a bit of a trouble here. I had to cut some powers of Cabinet members for just being too short-sighted or jumping into each other’s territory, turf war,” Duterte said.

Meanwhile, Duterte hinted that he is inclined to import more rice and he does not think the Philippines can ever be rice self-sufficient.

This contradicts his stance the year before in which he discouraged rice importation in order to protect local rice farmers. While consumers’ concerns are perceived to be addressed in the coming weeks due to the availability of NFA rice in the market, farmers may be the next to dive into the battle arena.

Congress is poised to pass the rice tariffication law this year. The law aims to amend the Agricultural Tariffication Act of 1996 and allow rice imports to flow in the country. The current law only allows the NFA to import rice.

Senator Villar said that allowing imports would bring down rice prices because of the tight competition. To protect local farmers, a tariff of 35% will be slapped to all rice imports.

Bantay Bigas Spokesperson Cathy Estavillo said the tariffs will not be enough and it will not be fair play for local farmers.

(Farmers will suffer under the rice tariffication law because products from Thailand and Vietnam are cheaper. There are a lot of promises that the farmers will get help, but even the irrigation problems now are not addressed.)

Villar admitted that farmers cannot compete with Vietnam because their production cost is only at P6 per kilo of palay, while the Filipino farmers produce at P12 per kilo.

For local farmers to be competitive, Villar said that she is working with the DA to push for the mechanization or use of machines in rice production and the distribution of seeds with better yield.

(We want farmers to have a sense of ownership because if we just give them seeds or a carabao, they will just sell it. But if they borrowed money for it, that won’t be the case.)

NEDA said the measure would lower the cost of rice in the market to P30.30 per kilo, P4.30 lower than the domestic wholesale price of regular milled rice. – with reports from Pia Ranada, Aika Rey, and Camille Elemia/Rappler.com