Jun 27, 2018 5:23 PM PHT
Aika Rey
Facebook Twitter Copy URL
Copied
Among those named in the complaints filed by the Department of the Interior and Local Government before the Office of the Ombudsman are Aklan Governor Florencio Miraflores, Malay Mayor Ciceron Cawaling, and Malay Vice Mayor Abram Sualog 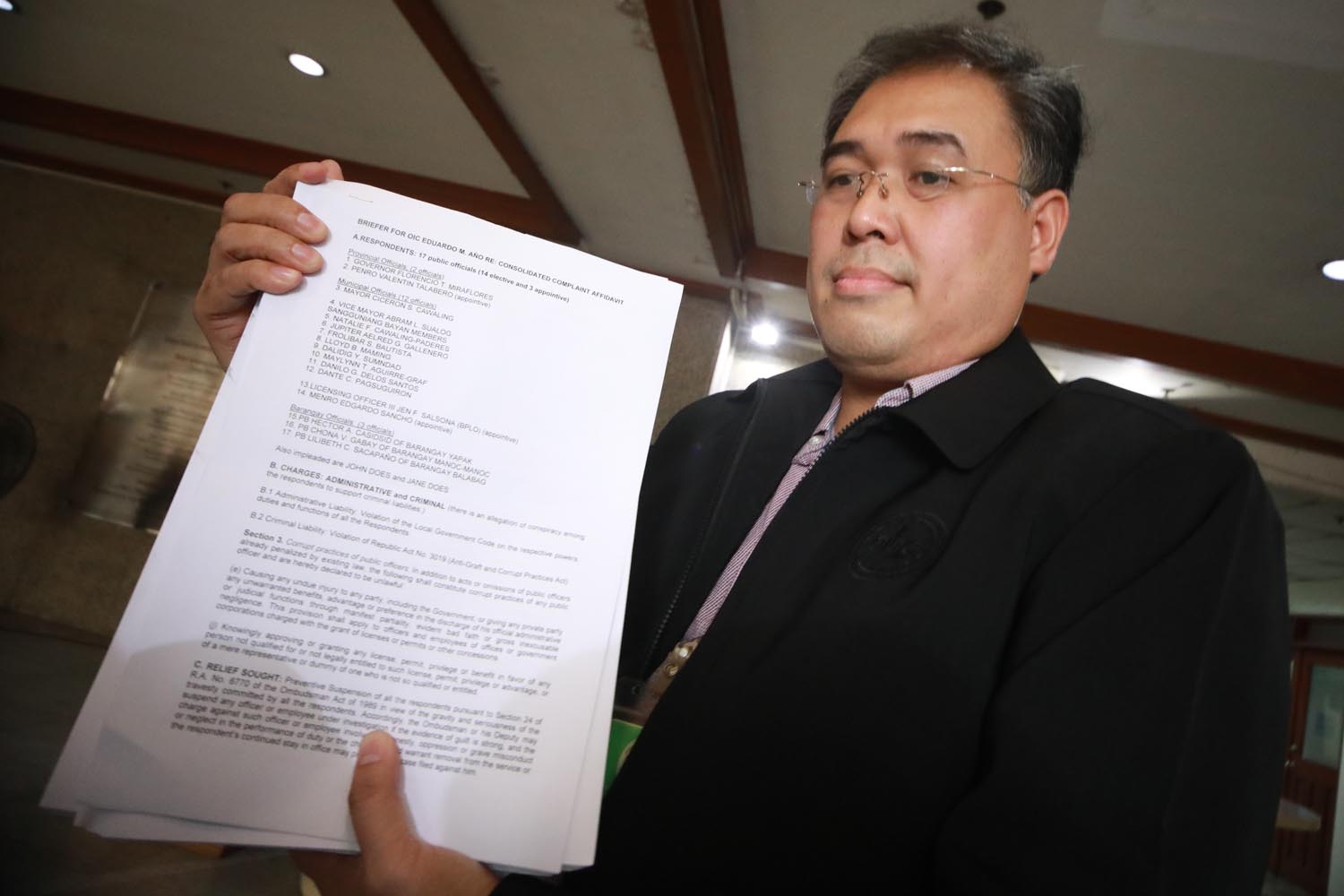 MANILA, Philippines – Two months after the closure of tourist hotspot Boracay, the Department of the Interior and Local Government (DILG) filed a complaint against 17 Aklan local government officials for alleged neglect of the island.

An investigation team led by Interior Undersecretary Epimaco Densing and DILG lawyers prepared the administrative and criminal complaints against the officials filed before the Office of the Ombudsman  on Wednesday, June 27.

President Rodrigo Duterte had ordered the island’s closure, saying Boracay had become a “cesspool” because of its sanitation and environmental problems. (READ: INSIDE STORY: How Duterte decided on Boracay closure)

A graft complaint was filed against the following:

The following officials are the subject of an administrative complaint:

Why were the cases filed? Based on the graft complaint, the investigation team saw discrepancies in the declared environmental fee collection and the actual sum collected.

Densing said the team has formally requested the Commission on Audit to conduct a special audit on Boracay’s environmental fees.

He also alleged that Cawaling and other officials tagged in the graft complaint “conspired” to issue permits to establishments.

“For example, the licensing officer will not be able to issue a permit without a clearance from the mayor. And remember, before issuing a mayor’s permit, you need complete documents. We saw that they lack documents,” he said.

“There are establishments that were able to operate without permits as well. The barangay captains should’ve seen this and stopped their operation,” the DILG official added.

Densing said that an administrative case was filed against Miraflores for “failing to supervise” the municipality of Malay, while Malay local officials were charged for “failing to exercise their oversight functions.”

What will happen next? If the Malay local officials are placed under preventive suspension, Densing said that officers-in-charge (OIC) will be appointed to take their place while they serve the suspension order.

“If only the mayor was suspended, then Vice Mayor Sualog will become Mayor as OIC,” he said.

Densing said it was only the first batch of cases that the DILG will file against errant officials in connection with Boracay.

“The next cases will encompass prior years because the environmetal fees were imposed back then. So officials prior to 2016 will also be charged,” Densing said in a mix of English and Filipino.– Rappler.com