Facebook Twitter Copy URL
Copied
The Commission on Audit says some school buildings in Metro Manila, Ilocos, and Cebu cannot be used due to issues with utilities, structural defects, and non-turnover of buildings

MANILA, Philippines – Some P326.31 million worth of school buildings constructed by the Department of Public Works and Highways (DPWH) cannot be used due to various issues, according to a Commission on Audit (COA) report.

COA reviewed the P109.31-billion Basic Educational Facilities Fund of the Department of Education (DepEd) and found that 10 buildings built by the DPWH, as the government’s construction arm, were unutilized.

Some school buildings in Metro Manila, Ilocos, and Cebu have issues ranging from incomplete utilities and minor structural defects to non-turnover of buildings. 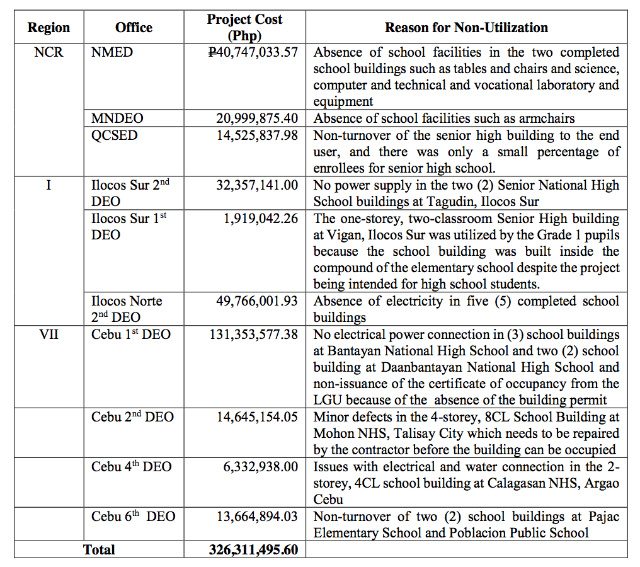 “The Basic Educational Facilities Fund was intended to address the surmounting classroom shortage the schools are experiencing at present,” COA said.

“Thus, the non-utilization of the completed school buildings due to lack of electricity and water and school facilities and delayed turnover hindered the delivery of quality basic education to the intended beneficiaries.”

Another P25.87 million worth of equipment procured by the DPWH and the Zamboanga del Norte 1st District Engineering Office were “not used as intended,” COA added.

State auditors recommended that the DPWH work closely with the DepEd to assess the viability of school building location sites to avoid issues.

Meanwhile, COA also found that 334 infrastructure projects of the DPWH worth P40.92 million have various technical defects. These projects include school buildings, roads, hospitals, and health centers, among others.

“If not corrected [or] rectified by concerned contractors, [it] may result in wastage of government funds and deprive the public of the maximum use of the infrastructure,” COA said.

Rappler sought the DPWH for comment. The public works department said a response will be sent on Monday, July 9. – Rappler.com