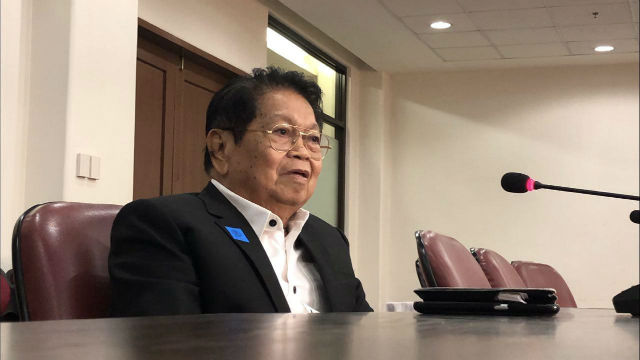 MANILA, Philippines – The Bangsamoro Transition Commission (BTC) believes the current draft of the proposed Bangsamoro Basic Law (BBL) being tackled by the bicameral conference committee is not a watered-down version of their original proposal.

Duterte met with them first before meeting with the bicam on Wednesday, July 11, to solve the deadlock on the Bangsamoro plebiscite.

“No, we don’t consider this as a watered-down BBL…. The fact is that, the BBL now as we see it, unless it is changed drastically, it is no longer ARMM minus. It is ARMM plus plus plus,” said Jaafar.

He clarified, however, that they are hoping the bicam would make good on its promise to retain provisions in the BBL that would give the Bangsamoro the same rights that the Autonomous Region in Muslim Mindanao (ARMM) is currently enjoying.

Jaafar said the BTC was satisfied with the outcome of their meeting with Duterte, whom he said they “love” and “respect” as he is a “brother from Mindanao.”

This is despite Duterte telling the bicam to adopt the House provision requiring the approval of the mother units before areas in Lanao del Norte and North Cotabato are included in the proposed Bangsamoro region.

The BTC originally wanted to do away with the mother units’ approval to make it easier for 6 Lanao del Norte towns and 39 North Cotabato barangays to join the Bangsamoro.

Jaafar said they understood Duterte’s decision, which was guided by the constitutionality of getting the approval of a mother unit when it comes to territorial changes. (READ: Lanao del Norte’s Dimaporo ready to question an unconstitutional BBL)

(We believe the reason of our beloved President why this has to go through the double majority. By double majority, that means the views of the voters from the entire province of Lanao del Norte would also be considered.)

The same areas in Lanao del Norte and North Cotabato had voted to join the ARMM during the 2001 plebiscite under Republic Act No. 9054. But they did not become part of the ARMM as their mother units opposed their inclusion.

Jaafar said Duterte had committed to back the other requests of the BTC, including giving powers to the Bangsamoro chief minister to appoint the regional police director as well as jurisdiction over Bangsamoro waters.

The Bangsamoro waters, however, remains a contentious issue that the bicam has yet to resolve. (READ: How heightened emotions, stress define bicam on proposed BBL)

Jaafar explained there would be no need for them to wage war on the government once the Bangsamoro region has been created.

Still, Jaafar said they “recognize and respect the process in lawmaking.” But he said they will continue watching over the bicam proceedings to make sure the proposed BBL will be a version satisfactory to the needs of the Moro people. – Rappler.com