Jul 16, 2018 10:05 AM PHT
Pia Ranada
Facebook Twitter Copy URL
Copied
Only two out of 10 Filipinos support moves to change the 1987 Constitution at this time, according to a June survey conducted by Pulse Asia 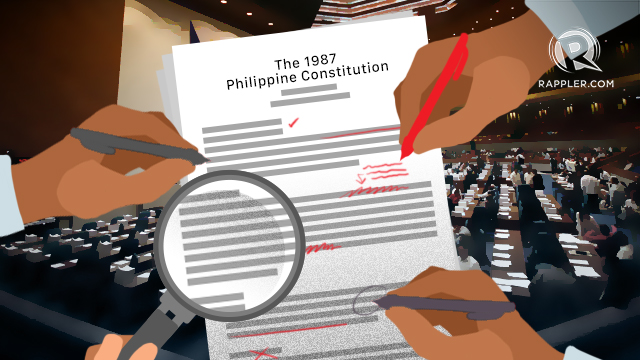 MANILA, Philippines – A majority of Filipinos reject the shift to a federal system of government now, according to a new survey by Pulse Asia.

The same survey found that only two out of 10 Filipinos agree that the 1987 Constitution should be revised at this time.

However, the number of those opposed to the shift to federalism now is less than the figure in March by 4 percentage points.

It appears that most of these points did not go to support for the shift. Rather, the number of Filipinos undecided about the shift rose by 4 percentage points.

The poll, conducted from June 15 to 21, found that 62% of Filipinos don’t want the present unitary system of government changed to a federal system now.

Pulse Asia conducted its survey around the time that President Rodrigo Duterte’s Consultative Committee began its regional consultations on its recommendations for a federal system of government.

Since February, media have been reporting on the Con-Com’s various proposed provisions ranging from regulations on political dynasties to the structure of 18 federated regional governments.

Breaking apart this figure, 34% are not open to the shift to federalism now or at any other time in the future while 28% are opposed to it only now but are open to it in the future.

Pulse Asia reported a +/-2% error margin for its national percentages. The subnational error margins are +/-6% for Metro Manila, +/-3% for Balance of Luzon, and +/-5% for both Visayas and Mindanao.

Support for a federal Philippines now is greatest in Mindanao, President Duterte’s home region. A little over half – 51% – of Mindanao respondents said they support the shift to federalism now.

Opposition to the shift to federalism is most pronounced in Balance of Luzon where only 16% are in favor of the shift now and 72% are not in favor.

The survey also found that only 18% or two out of 10 Filipinos Filipinos support charter change at this time. This is 5 percentage points lower than in March when 23% of respondents said they want the charter revised at that time.

Those opposed to changing the Constitution now grew to 67%, from 64% in March, an increase by 3 percentage points. Of this, 30% said that while they don’t want the charter amended now, they are open to changes in the future.

Still a small number of Filipinos are knowledgeable about the federal system of government being proposed by the administration.

A majority, 69%, said they know little or nothing about the proposed federal system of government. This figure is virtually unchanged since March when 71% of Filipinos said they had little or no knowledge.

However, awareness about proposals to change the 1987 Constitution rose from March to June.

Pulse Asia found that 55% or more than half of Filipinos are knolwedgeable about efforts to change the charter. This is a 6-percentage point increase from the March figure of 49%.

Meanwhile, 74% or 7 out of 10 Filipinos admitted knowing little or no knowledge about the 1987 Constitution.

The Consultative Committee on July 9 formally turned over its draft to President Duterte.