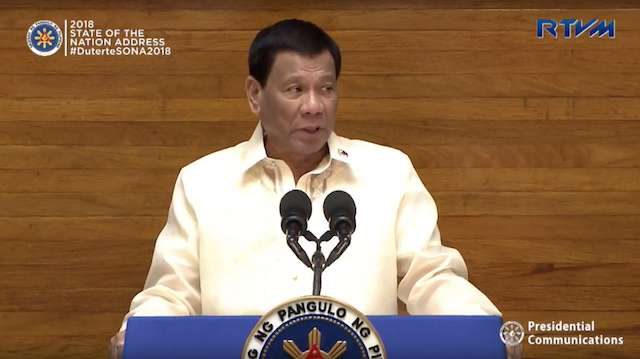 MANILA, Philippines – President Rodrigo Duterte made good on his promise to keep his 3rd State of the Nation Address (SONA) shorter than usual.

Duterte’s SONA lasted around 50 minutes and he mostly read the 16-page prepared speech on Monday, July 23.

While 50 minutes is still 15 minutes longer than his original promise of “not more than 35 minutes,” it’s still a relatively short Duterte SONA.

His speech last year stretched to 2 hours. His first SONA, in 2016, was an hour-and-a-half long. It was also tellingly devoid of curse words.

Veteran journalist Marites Vitug said the relative brevity of this year’s speech was a “pleasant surprise.”

She said the short speech allowed for Duterte to make clear his marching orders to Congress and to departments and agencies under him.

Unlike in his previous SONAs, the President also minimized his off-the-cuff remarks. There were several deviations from the written speech but for the most part, he stayed on-script.

The brevity of this speech was also largely due to Palace scriptwriters leaving out  the usual lengthy accomplishment reports that have come to distinguish SONAs. – Rappler.com