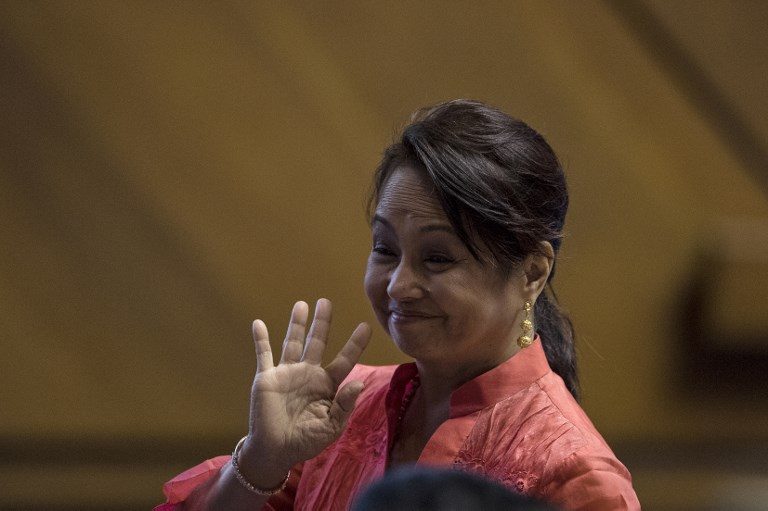 Facebook Twitter Copy URL
Copied
Gabriela Representatives Emmi de Jesus and Arlene Brosas said they will not support Arroyo, adding, 'Filipino women do not tolerate corrupt people in power, even if it is a ‘She''

“As it is now, it appears that the Duterte administration is rehabilitating a plunderer and massive human rights violator by making Gloria Macapagal-Arroyo the speaker of the House and this is truly condemnable. First, they rehabilitated Marcos, now its Gloria,” he added.

“Let us not forget that Gloria Arroyo was not only an election cheater, but also a plunderer and enabler of ‘butcher’ Jovito Palparan and Value Added Tax hike; attacks on civil liberties, allowing of foreign military meddling and eviction of urban poor communities were also extremely bad during her time as the president.”

Gabriela Representatives Emmi de Jesus and Arlene Brosas said they will not support Arroyo, even if she is the first female lawmaker to become Speaker in the Philippine legislative history.

(It doesn’t automatically mean women would support another woman in power. We can’t recycle abusers of power)

“Gabriela Women’s Party will never forget the 1,206 victims of extrajudicial killing, 206 victims of enforced disappearances, more than 2,000 cases of illegal arrests, and thousand of forced evacuation during the 9-year presidency of Gloria Arroyo,” they added.

As of posting, Alvarez remains silent on his ouster. There were last ditch efforts to stop the plan to unseat him, but Alvarez’s coup plotters had the upper hand. Sources said no less than presidential daughter and Davao City Mayor Sara Duterte-Carpio lobbied for his removal. – Rappler.com