Jul 24, 2018 12:30 PM PHT
Sofia Tomacruz
Facebook Twitter Copy URL
Copied
While the House has passed its version of the bill, the counterpart measure in the Senate is still pending in the committee level 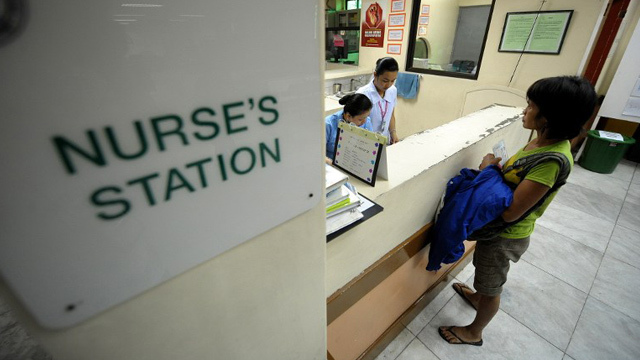 MANILA, Philippines – President Rodrigo Duterte urged Congress during his 3rd State of the Nation Address (SONA) Monday, July 23, to swiftly pass the Universal Health Care (UHC) Bill, which aims to ensure all Filipinos will get access to adequate health services.

During his address, Duterte said “policy and operational bottlenecks” have hindered the access to health care in the Philippines despite investments.

“Much needs to be done to improve our healthcare system, which remains highly fragmented, resulting in disparity in health outcomes between the rich and the poor in the urban areas and rural,” Duterte said. (Duque: Access to primary health care depends on coordination with LGUs)

He added, “I urge the speedy passage of the Universal Health Care Bill authored by former representative Harry Roque.”

Back when Roque was a congressman, he said that if universal health care becomes a law, “every Filipino is granted the right to health by virtue of citizenship.”

Roque also said in universal health care individuals and communities will get the “full spectrum” of health services they need, from health promotion to prevention, treatment, rehabilitation, and palliative care.

Membership in the UHC will either be contributory, in terms of public and private workers; or non-contributory for people who do not give contributions, such as indigents.

While the House has passed its version of the bill (House Bill No. 5784), the counterpart measure in the Senate (Senate Bill No. 1458) is still pending in the committee level. – with a report from Bea Cupin/Rappler.com