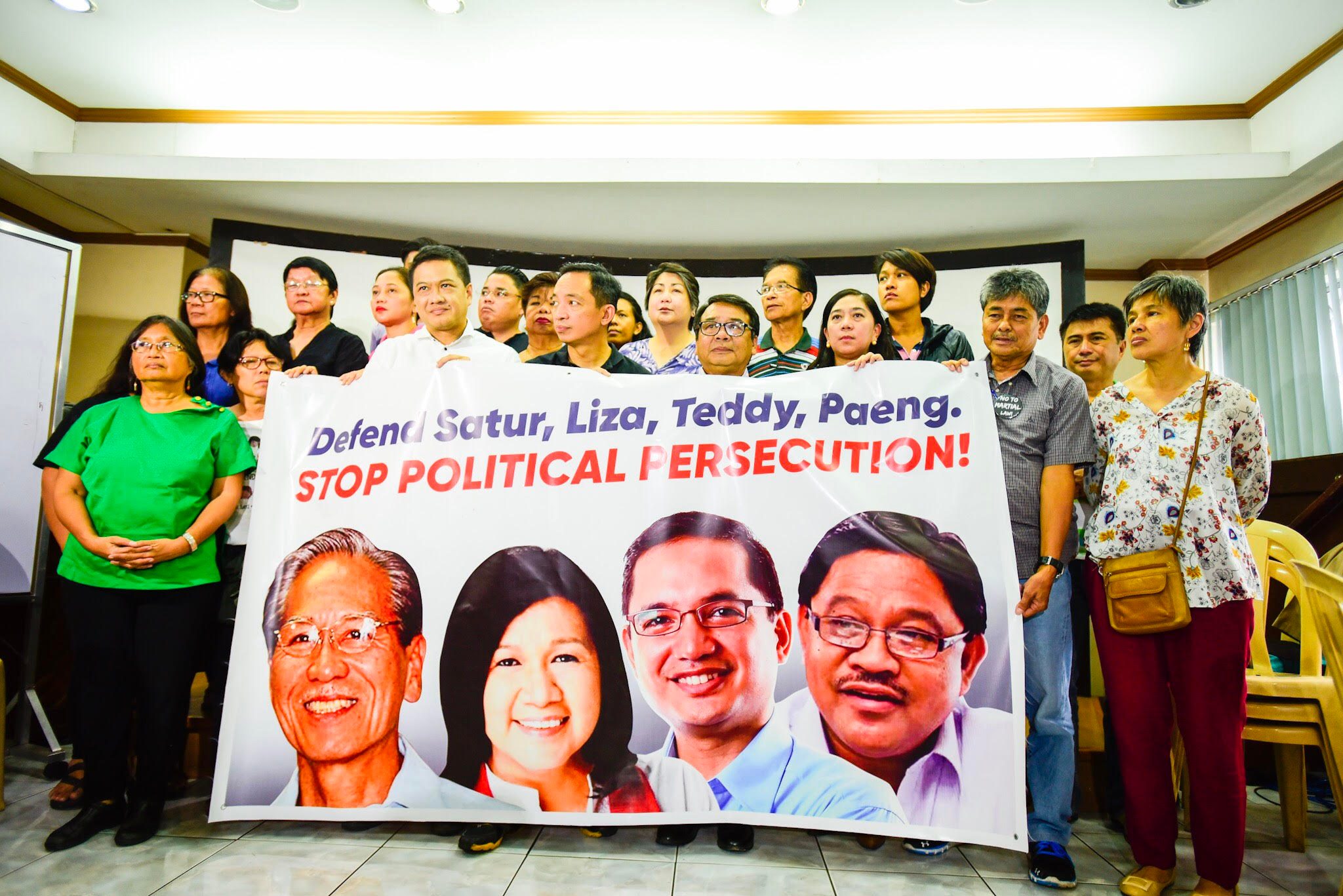 Facebook Twitter Copy URL
Copied
The case was filed by widows Isabelita Bayudang and Mayumi Peralta, accusing the 4 leftist leaders of conspiring to kill their husbands Carlito Bayudang and Jimmy Peralta in 2004 and 2003, respectively

MANILA, Philippines – Leaders of leftist groups on Friday, July 29, denounced the issuance of an arrest warrant against leftist leaders – all former party-list representatives – based on murder charges filed in 2006.

In the arrest order dated dated July 11, 2018, Presiding Judge Evelyn Turla of the Regional Trial Court in Palayan, Nueva Ecija, wrote that upon examination of the case, a probable cause was already found against the accused:

This case was filed 12 years ago by widows Isabelita Bayudang and Mayumi Peralta, who accused the 4 leftist leaders in conspiring to the killing of their husbands, Carlito Bayudang and Jimmy Peralta, who were killed in 2004 and 2003, respectively.

Rachel Pastores, the legal counsel of the accused, told reporters on Friday that the complainant alleged that, in 2000, the 4 allegedly planned and met to kill former supporters of Bayan Muna –including Bayudang and Peralta – who transferred to other parties.

The complainants said the plan was backed by leaders of Bayan Muna and the Communists Party of the Philippines.

According to Pastores however, police records previously showed that Carlito Bayudang was shot on May 6, 2004, at Barangay Cruz, Bongabon, Nueva Ecija because of a land dispute, while Jimmy Peralta was killed in a hit-and-run on December 23, 2003.

“The kuwento (story) itself is already incredible and ridiculous,” Pastores said in the press conference held at the National Council of Churches in the Philippines in Quezon City

In 2008, Judge Turla ruled that there were no sufficient allegations in the statements filed by the complainants to find probable cause.

In 2007, the widows also filed for the disqualification of party-list organizations Bayan Muna, Gabriela, and Anakpawis with the Commission on Elections on the basis of the same complaint. It was dismissed.

Years later, Bayan Muna filed a civil case for damages at a regional trial court in Quezon City against the widows for their false accusations. In June 2016, Presiding Judge Edgardo Bellosillo ordered the widows pay a total of P325,000 for nominal damages, moral damages, exemplary damages, and attorney’s fees to the leftist group and concluded that Bayudang made “untruthful statements.”

“Considering the same evidence was reviewed by the judge…what made her change her decision?” Pastores said. “That’s what we’re going to ask in our motion for reconsideration.”

Pastores added that the complainants or the widows never presented themselves to the accused or even the public prosecutors, which should be basis for the case’s dismissal.

“Suddenly, there was just a decision even when the accused never had the chance to face the complainants,” Pastores said in Filipino.

On Monday, July 30, Pastores will file a motion for reconsideration at the regional trial court in Nueva Ecija, and ask for the case to be dismissed. She will also set a hearing in Palayan on Friday, August 3.

“They (the accused) will definitely face this case. I don’t know what their specific plans are yet, but definitely we will file a motion for reconsideration,” Pastores said. – Rappler.com