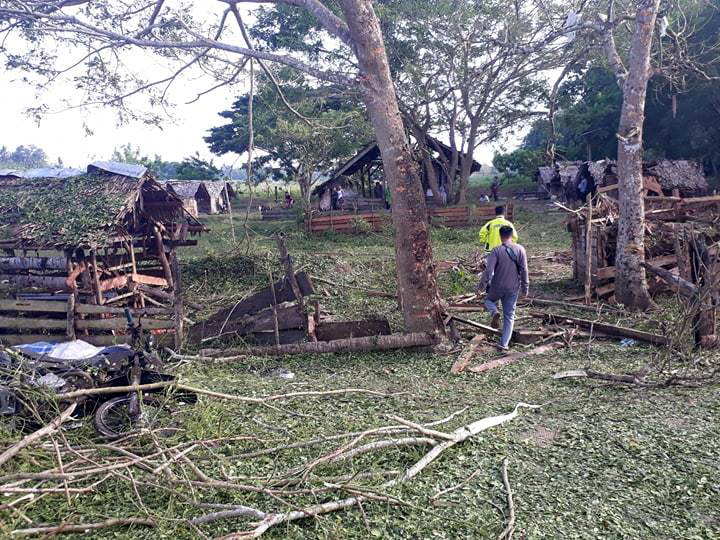 MANILA, Philippines – The driver of the white van looked uneasy when he was flagged down at the break of dawn on Tuesday, July 31, at a checkpoint just outside Lamitan City.

On alert due to intelligence reports about a planned attack by the Abu Sayyaf, one of the militias at the checkpoint radioed a Scout Ranger unit positioned in a nearby detachment.

But it was too late. The van exploded.

“The Cafgu [members] were seeking assistance on what to do. They were talking. Apparently, it exploded while they were talking on the phone,” Lieutenant General Arnel Dela Vega, chief of the Western Mindanao Command, told Rappler in a phone interview on Tuesday after his visit to Basilan. Cafgu refers to the Civlian Armed Forces Geographical Unit, a group of counter-insurgency militias that for decades has been trained and funded by the military.

It is unclear what the militias saw and reported to the Scout Ranger detachment, if the driver said anything that triggered the alert, or how many IEDs he had with him in the vehicle.

All the witnesses at the checkpoint were killed in the blast, including the driver, as well as wives and children of militias who happened to be visiting.

The military said the Abu Sayyaf Group (ASG) led by notorious leader Furuji Indama is behind the attack.

Even in hiding, the close associate of slain Islamic State (ISIS) emir Isnilon Hapilon unleashed terror in a province that had long declared it was winning the war against the bandit group.

Basilan Governor Jim Hataman said the Abu Sayyaf has long been defeated in the province, where communities have served as models of local cooperation against extremism.

But the deadly blast highlights why the Abu Sayyaf problem is unique, Hataman said.

Hataman said it’s also harder to locate and hunt down a much smaller group. There are reports Indama has left Basilan, but Hataman believes he’s hiding in the thick forests of the province.

Indama is a notorious bandit who was once close to Hapilon.

He is believed to be one of the ajang-ajang, the so-called “sons of martyrs,” whose fathers or uncles died in battles with the military.

Governor Hataman said Indama volunteered to join the Abu Sayyaf, showing a different level of commitment early on compared to most recruits.

Indama was responsible for the April 2016 attack that killed 22 soldiers in Lamitan.

There was a time that on his say-so, Indama could bring war to any town or city in Basilan – anytime.

(In the past, when he declared, ‘I’m bringing war to Lamitan’, he can really bring war to the city. If you dare go to him, he will wait for you and will really fight you himself),” said Hataman.

At the height of his notoriety, no government project could be implemented if Indama didn’t get grease money, the governor said.

(There were times when even during the birthday of a mayor, he would say, ‘If you don’t pay us, we will have your place strafed’. That was the level of his activity before. He can’t do that anymore these days.)

Hataman said they have reduced Indama into a shadow of his former self, and communities are no longer willing to give him refuge.

The governor is counting on the mechanisms in place in his province to protect these gains.

Supposed witnesses described the van driver as someone who looked like a foreigner and who didn’t speak the local language.

Lieutenant General Arnel dela Vega, commander of the Western Mindanao Command, said that based on intelligence reports, the IEDs were supposed to be brought somewhere else. This prompted the military to boost its checkpoints in key areas in Basilan on Tuesday.

Hataman said the Abu Sayyaf target could have been the parade at the city proper scheduled on Tuesday morning, in celebration of Nutrition Month. He hailed the “vigilance of the detachment.”

“If the purpose was to bring it there, then it would have been more damaging and worse than what happened,” Hataman said.

Outsiders are wary of the continued presence of foreign fighters in the province where Hapilon came from – the ISIS emir that triggered the siege of Marawi in Central Mindanao last year.  (Hapilon was killed in October 2017.)

While the ASG has mainly turned from rebels to kidnappers, the Basilan faction in recent years abandoned the crime and instead relied on funding from foreign terrorist networks.

A possible suicide bombing also poses an even bigger challenge to a country that is still grappling to rebuild after the siege of Marawi.

“There are few ways to look at it. On one hand, it could be a sign of weakness. The AFP wants to show that they have the ASG on the run and they’re resorting to desperate measures,” said Zachary Abuza, Southeast Asia security expert at the National War College in the US.

“Another take would be that if it was a foreign fighter, they might be trying to show what a real jihadist does to inspire the ASG to escalate the violence. Suicide bombings tend to inspire other attacks. They show utmost commitment to the cause and willingness for martyrdom,” said Abuza.

The ASG in Basilan is known to have hosted foreign fighters who tried but failed in the past to recruit local suicide bombers.

“Certainly the way that the ASG and IS will spin this is it’s a show of strength. They have the will and the resources to perpetrate these attacks,” Abuza said. – Rappler.com