Aug 3, 2018 8:47 AM PHT
Rappler.com
Facebook Twitter Copy URL
Copied
The Commission on Audit reminds PhilHealth that its operating fund is mainly sourced from members' contributions which 'should be managed and protected with utmost integrity' 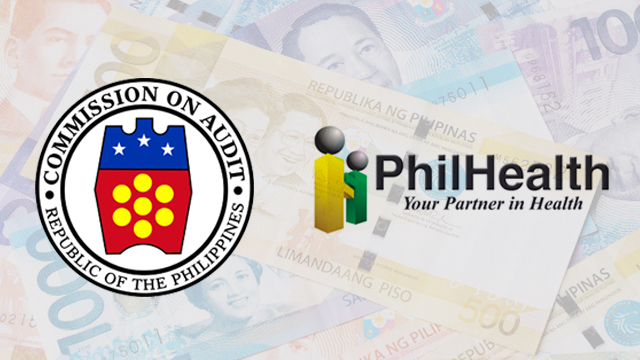 MANILA, Philippines – The Commission on Audit (COA) has affirmed its decision that the Philippine Health Insurance Corporation (PhilHealth) gave nearly P164 million in unauthorized perks to officials and personel in 2009, 2010, and 2014.

COA made public on Thursday, August 2, two decisions denying the appeals of PhilHealth officials to lift the disallowances on the unauthorized bonuses and allowances.

The commission said the payment of P80.79 million in bonuses and cash gifts from 2009 and 2010 had no legal basis as there was no prior approval from the Office of the President. COA also  cited violations of Department of Budget and Management (DBM) Circular No. 11.

Five notices of disallowance were issued in 2011:

Two other notices of disallowance were issued in 2015:

The COA, however, upheld the stand of the cluster director that PhilHealth’s claim had no merit as the authority of its board was not absolute.

COA also reminded PhilHealth that its funding is mainly sourced from its members’ contributions.

“Like any other social insurance, the members’ contributions are treated as a trust fund, and thus, should be managed and protected with utmost integrity,” the commission said.

COA said only the PhilHealth Board and its certifying officials may be held liable for the P80.79 million in performance incentives, Christmas packages, and anniversary gifts. It said rank and file employees only received these benefits in the “honest belief that the amounts were due them.”

In the case of the P83.062 million in education assistance and birthday cash gifts, COA said PhilHealth’s good faith defense does not apply because there are existing rules prohibiting such extra compensation.

“The laws and rules requiring prior approval of the Office of the President and the DBM were already in existing prior to the grant and receipt of the allowances and benefits. In fact, several disallowances have been previously issued against (Philhealth) which should have made petitioner more conscious and mindful,” COA said.  – Rappler.com