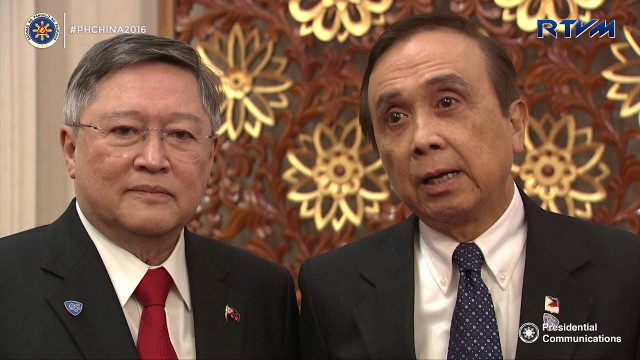 If he cannot do so, Duterte should order them to temper their statements about federalism, said Aquino.

“If he (Duterte) favors federalism, let him sack Dominguez and Pernia or command them to keep their traps shut,” Aquino said on Thursday, August 9, in a Facebook post.

His remarks come after the two economic managers voiced concerns about the proposed shift to a federal system of government. Dominguez called the Con-Com’s draft charter “confusing” and said he would not vote in favor of it at this time. Pernia said the shift would “wreak havoc” on the economy.

To Aquino, such statements from Cabinet members could mean Duterte himself has grown lukewarm to federalism.

“If Dominguez and Pernia, in their official capacities, speak loudly against Federalism, then the question should be asked in all earnestness whether the President is for it or not,” said Aquino.

He criticized the two secretaries for voicing their apprehensions on federalism when “freedom of expression does not apply to Cabinet officials in respect to policy.”

The Con-Com member further called on Duterte to set the record straight on his stance on the shift to a federal system.

“Let us be clear now and let our President speak with a convincing baritone that he wishes Congress to pass a federal constitution – if indeed he wishes it so, rather than in quavering falsetto,” said Aquino.

If Duterte has indeed grown “cool to federalism,” Aquino described himself and fellow Con-Com members as “fools.”

“If the President is now cool to federalism, let him give the order to abandon the federalist ship. Then all of us fools who wrote the draft and defended it with all our might will know that we have been taken for a ride – for a very expensive ride – but we shall at least have the chance to abandon ship before it is scuttled!” said Aquino.

Earlier that day, Malacañang insisted that all Cabinet members support the push for federalism. Presidential Spokesman Harry Roque said the statements of Dominguez and Pernia were not conclusively in opposition to federalism. – Rappler.com