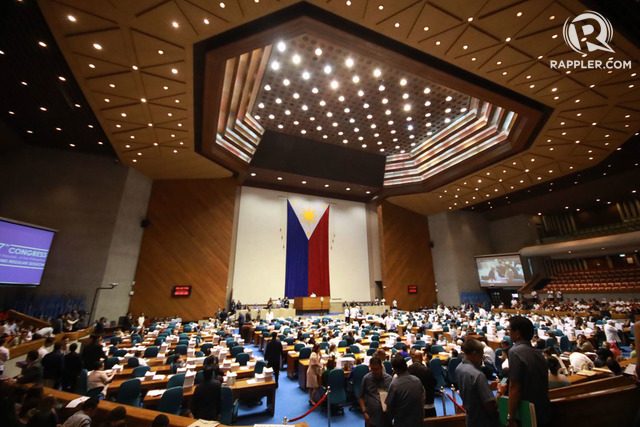 Facebook Twitter Copy URL
Copied
'[It is the] decision of the House, to be consistent with the position of the House to oppose cash-based budgeting,' says House committee on appropriations chairperson Karlo Nograles

MANILA, Philippines – The House of Representatives on Saturday, August 11 suspended hearings on the proposed 2019 national budget, citing as reason its opposition to the proposed cash-based budgeting system.

The decision was announced on the media Viber group of the House committee on appropriations.

When asked why the House is suspending budget deliberations, House appropriations committee chairperson Karlo Nograles answered: “”[It is the] decision of the House, to be consistent with the position of the House to oppose cash-based budgeting.”

The Davao City 1st District representative added that the briefings will be suspended “until further notice” to give time to the Development Budget Coordination Committee (DBCC) to make the necessary changes in the National Expenditure Program (NEP).

“And since we will revert to obligation-based budgeting, we will give time to DBCC to make the necessary changes,” Nograles said.

Since the start of budget hearings last July 31, lawmakers have already expressed confusion over the proposed change in budgeting systems.

Supposedly the first cash-based budget of the government, the 2019 NEP amounts to P3.757 trillion, representing 19.3% of the projected gross domestic product (GDP) for 2019.

Rappler has reached out to Budget Secretary Benjamin Diokno for comment, but he has yet to reply as of posting.

The shift to cash-based budgeting is supposedly seen to reduce underspending among agencies.

For the longest time, agencies’ budgets follow a two-year obligation-based budgeting, which disburses payments as obligations or commitments that may not necessarily be delivered within the same year.

An obligation-based budget was still approved for 2018, but with a one-year validity to prepare for the supposed shift.

If approved, that means implementing agencies need to complete their contracts by the end of 2019, regardless of possible delays. Projects that are “not implementation-ready” would be removed from the proposed budget.

Under the system, an extended payment period of 3 months after the fiscal year would be implemented to give more time for government agencies to make their payments.

They may also apply for a multi-year obligation authority, a document issued either for locally-funded or foreign-assisted projects implemented by government agencies, in order to authorize the latter to enter into multi-year contracts for the full project cost.

Diokno has advocated for the passage of House Bill No. 7302 or the Budget Reform Bill which institutionalizes cash-based budgeting system.

HB 7032 was approved on third and final reading in March, but a movement within the House wants it recalled.

Diokno argues that the Philippines is among the countries that do not have a cash-based budgeting system.

He earlier said the set-up would “force” the agencies to spend and fast-track delivery of services. – Rappler.com