Duterte: ‘I am ready to step down’ 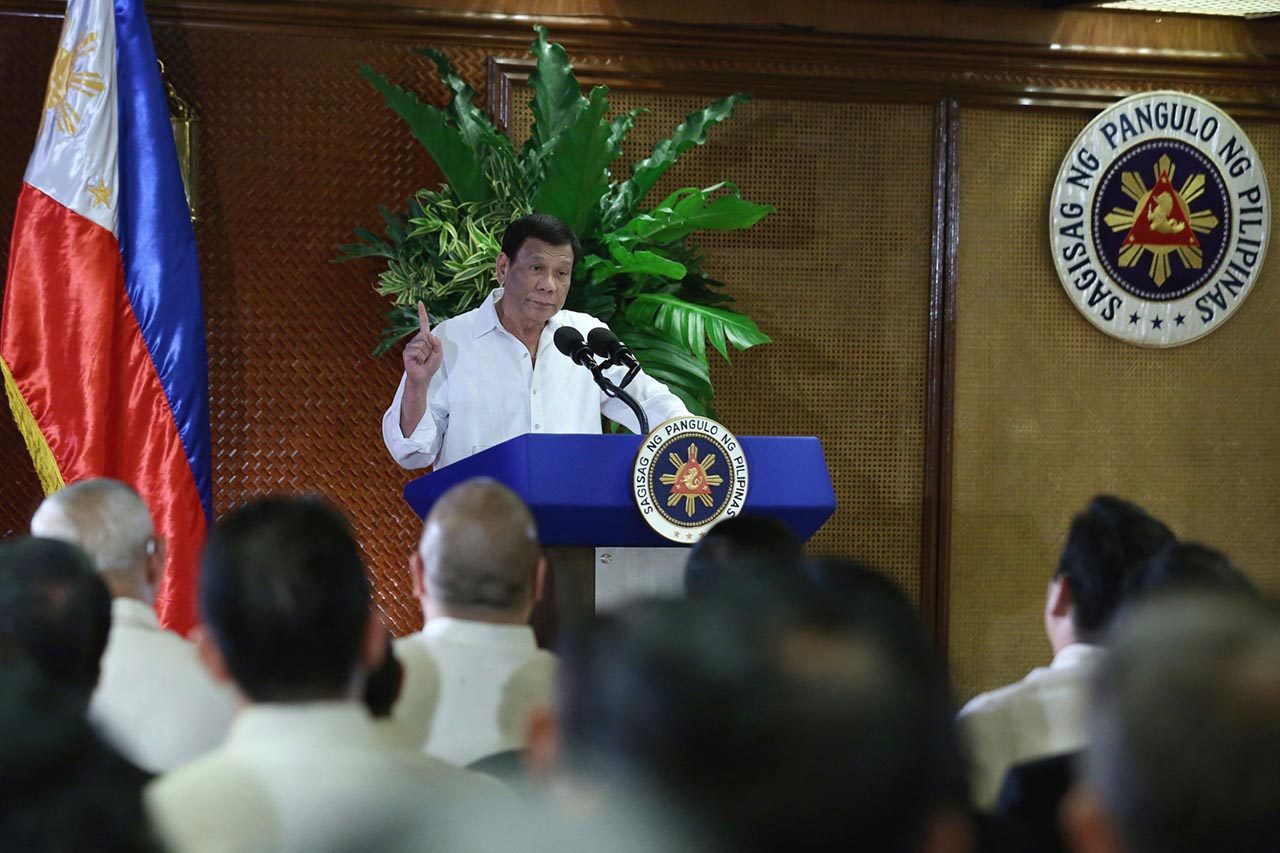 Facebook Twitter Copy URL
Copied
(2nd UPDATE) But President Rodrigo Duterte rejects Vice President Leni Robredo as his successor, saying, 'I do not think she can improve on anything here'

MANILA, Philippines (2nd UPDATE) – President Rodrigo Duterte declared he is ready to leave the presidency should the military and police “find” the right successor.

“At this time, I am telling you, I am ready to step down and retire,” he said on Tuesday, August 14, during the Pilipinas Angat Lahat launch in Malacañang.

He supposedly also told this to security officials during a recent joint military and police command conference.

“Sinabi ko sa mga sundalo at pulis (I told the soldiers and police), ‘Guys, I want you to know that I am thinking of stepping down,'” he said, explaining that he was “tired” and frustrated by corruption in government.

“I am exasperated because however I try – I was dealing with the problem of Nayong Pilipino,” he said, referring to the supposedly “flawed” lease contract between Nayong Pilipino Foundation and Landing Entertainment, a Chinese casino operator.

“Graft is so embedded, it is endemic, and it is always part of the territory of a transaction especially by government…. I do not think I can fulfill my promise to the people,” he said.

It’s not clear how serious Duterte is since he has made similar pronouncements before. He has spoken of resigning or not completing his term, but usually takes a light-hearted tone. (READ: Duterte’s constant musings on death, resignation)

The President also started and ended his speech with his idea of resigning. At the beginning of his speech, he even said he was “embarrassed” to talk about it in the presence of House Speaker and former president Gloria Macapagal Arroyo as it would “cheapen” the presidency.

No to Robredo as president

Duterte expounded on a scenario of his possible “resignation,” even sharing his thoughts on who should succeed him.

He said he would resign if security officials “find” the right leader.

“If you say, ‘President, sir, we find you not at par or not in parity with the expectations,’ and you say, ‘We have found a leader,’ I will step down,” he said.

Duterte, however, rejects Vice President Leni Robredo as his successor, even if the 1987 Constitution states the vice president takes over upon the president’s resignation.

“I am hesitant to suggest a constitutional succession. I have nothing against Robredo. She’s a lawyer, you have heard her talk, but I do not think she can improve on anything here,” he said.

Duterte even claimed Naga City, where Robredo is from, is a “hotbed” for illegal drugs.

Why entrust the choice of the next president to the police and military?

“They are the only organizations that can control [the situation] when everything breaks loose,” said Duterte.

The Vice President’s camp brushed aside the value of Duterte’s “endorsement,” citing his measure of competence, based on the performance of some of his appointees.

(‘Competent’ people, according to the President: a tourism secretary who is always on the take. An NDRRMC head who goes missing when there’s flooding, an NFA chief who ran out of rice. He can have his endorsement, let’s just follow the Constitution.)

Gutierrez was referrring to former tourism secretary Wanda Teo, who resigned following public outrage over the multimillion-peso Department of Tourism ad placement in the TV show of her brother. (READ: Gordon: ‘Clear conflict of interest’ in Tulfos’ P60-M ad deal)

Earlier this year, senators blamed National Food Authority chief Jason Aquino for the price increase in NFA rice as they probed the dwindling rice stocks in the country. Duterte later removed Cabinet Secretary Leoncio Evasco Jr – who had policy differences on rice importation with Aquino – as head and member of the NFA Council. – With a report from Mara Cepeda/Rappler.com