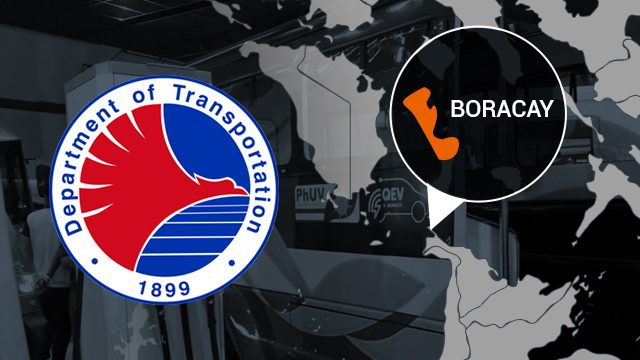 Facebook Twitter Copy URL
Copied
While Yellow Dot recently did a survey of Boracay's transport requirements for public utility vehicle modernization, the Sangguniang Bayan of Malay, Aklan, wants to reconsider whether the proposal will complement e-trikes on the island.

AKLAN, Philippines – Modern public utility jeepneys may eventually course through Boracay roads as part of a transport modernization program by the Department of Transportation (DOTr).

The program hopes to provide safer and more comfortable utility vehicles for tourists and residents of Boracay to take advantage of, and one company’s already doing its due diligence for a possible implementation.

However, the Sangguniang Bayan of Malay, Aklan, wants to reconsider whether the proposal will complement the electronic tricycles (e-trikes) operating on the island.

A 23-seater modern jeepney for use in Boracay – costing P1.9 million – would be equipped with a global positioning system (GPS), Internet connectivity via WiFi, an automatic fare collection system (AFCS), and a closed-circuit television (CCTV). These modern jeepneys will serve the 9.1-km Boracay main road route for a minimum fare of P10 for the first 4 kilometers, and a charge of P2 for each succeeding kilometer.

These modern jeepneys will also serve the 2.3-km Caticlan airport-to-port route in mainland Malay for a P10 fare.

According to Yellow Dot, the rollout will help decongest the Boracay main road. These modernized jeepneys can carry more passengers, and will have designated and timed stops and pick-ups.

The existing e-trikes operating on the island will be redeployed on the narrow routes of Boracay. The e-trikes will also adopt a color coding scheme for each route.

The route rationalization will also ensure passenger volume and income of unit for drivers and stakeholders and will regulate the routes under the automated fare collection system.

With the reopening of Boracay on October 26, modern jeepneys would, as Yellow Dot proposes, cater to the large demand of passengers from Kalibo and Caticlan airports and the two sea ports in Tabon and Caticlan in Malay, Aklan.

Yellow Dot added such transport modernization procedures will address the undersupplied routes in Boracay and support public transport users of all income levels.

Currently, the Boracay Land Transport Multi-purpose Cooperative (BLTMPC) has 543 member trikes and also operates 64 multicabs in Boracay and Malay – 27 of which are defective – and one 22-seater solar jeep. – Rappler.com