MANILA, Philippines – The government has approved the permits to operate of 25 hotels and resorts in top tourist destination Boracay Island.

The Department of Tourism released the initial list of establishments that have complied with the interior and environment departments’ permits and clearances, as of Friday, August 31.

Of the accredited establishments, Fairways and Bluewater Beach Resort in Barangay Yapak has the most number of rooms at 700. It is followed by Azalea Apartment Hotel with 284 rooms.

The 25 lodging establishments have a total of 2,063 rooms. Boracay has been closed to tourists since April 26 and will reopen on October 26. 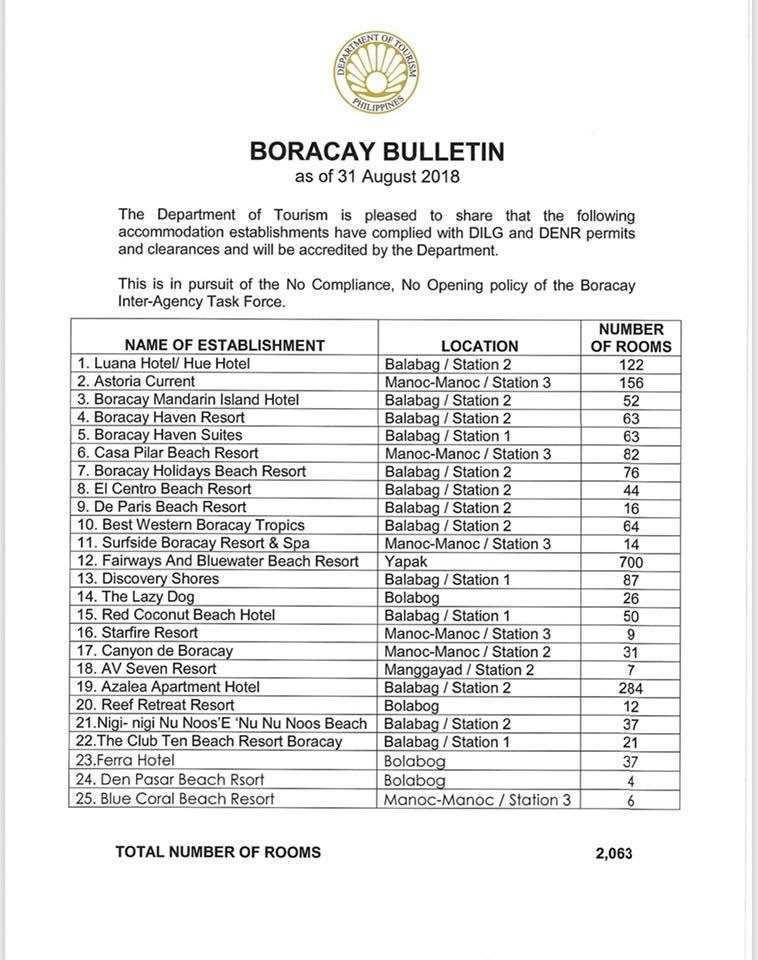 The Inter-Agency Task Force is implementing a “No Compliance, No Opening” policy to ensure that establishments follow rules and regulations.

It is still unclear how many establishments will be accredited in the coming days, as Environment Secretary Roy Cimatu earlier said that the “total number of hotel rooms has exceeded the ideal range.”

In July, the Department of Environment and Natural Resources suspended all compliance certificates issued to businesses, to review if they are following local and national laws.  (IN PHOTOS: Businesses ‘dead’ in Boracay)

Establishments and households not connected to sewerage treatment plants triggered the increase of water pollution to extreme levels, especially during summer months because of the large number of people that flock to the world-famous island resort. (WATCH: How green can Boracay get?) – Rappler.com