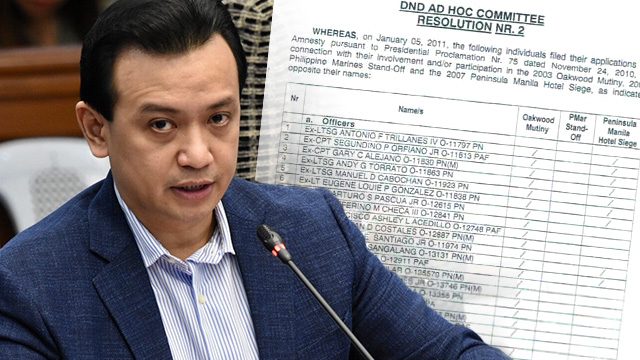 MANILA, Philippines (UPDATED) – Old documents obtained by Rappler showed the Department of National Defense (DND) certified that Senator Antonio Trillanes IV submitted an application for amnesty, contrary to Malacañang’s claim that he did not.

The same documents showed he and other ex-mutineers admitted to specific crimes, such as mutiny, in their application.

The document reads: “Whereas, on January 05, 2011, the following individuals filed their applications for Amnesty pursuant to Presidential Proclamation Nr 75 dated November 24, 2010, in connection with their involvement and/or participation in the 2003 Oakwood Mutiny, 2006 Philippine Marines Stand-Off and the 2007 Peninsula Manila Siege, as indicated opposite their names:”

The name of Trillanes was first on the list, which identifies his rank as “Ex-LTSG,” indicating that he had left the service then.

In the following page of the resolution, the ad hoc committee also recommended to then-defense chief Voltaire Gazmin to approve the application of Trillanes and 18 others.

In a cover letter addressed to then-President Benigno Aquino III on January 25, 2011, Gazmin also reported that the panel found the applications to be in “order.”

“After careful review and deliberation, the Committee found their applications to be in order and the applicants qualified for amnesty,” Gazmin said in the letter obtained by Rappler.

He also informed Aquino that he approved the committee’s recommendation and granted the amnesty to Trillanes and other military officers. (READ: Duterte voiding Trillanes’ amnesty: Everything you need to know)

Magdalo Representative Francisco “Ashley” Acedillo, who was part of the 2003 Oakwood Mutiny, provided a copy of the resolution. Rappler then obtained documents from another source privy to the event.

“Ordinary citizens can easily debunk that. It is of judicial notice, meaning it is widely known. It was widely covered by the media that on a particular day in January 2011, he applied for amnesty and was in fact processed,” Acedillo said, dismissing Malacañang’s move against Trillanes as “political.”

There is a video of a news report from January 2011 showing Trillanes in Camp Aguinaldo submitting his application for amnesty. The news package showed an interview of Trillanes admitting that he violated laws and another interview with a defense official explaining how the process will proceed after the amnesty application.

On Thursday, September 6, Trillanes presented the same documents in a press conference. He also showed a copy of a blank application form that had a portion on admission of guilt. 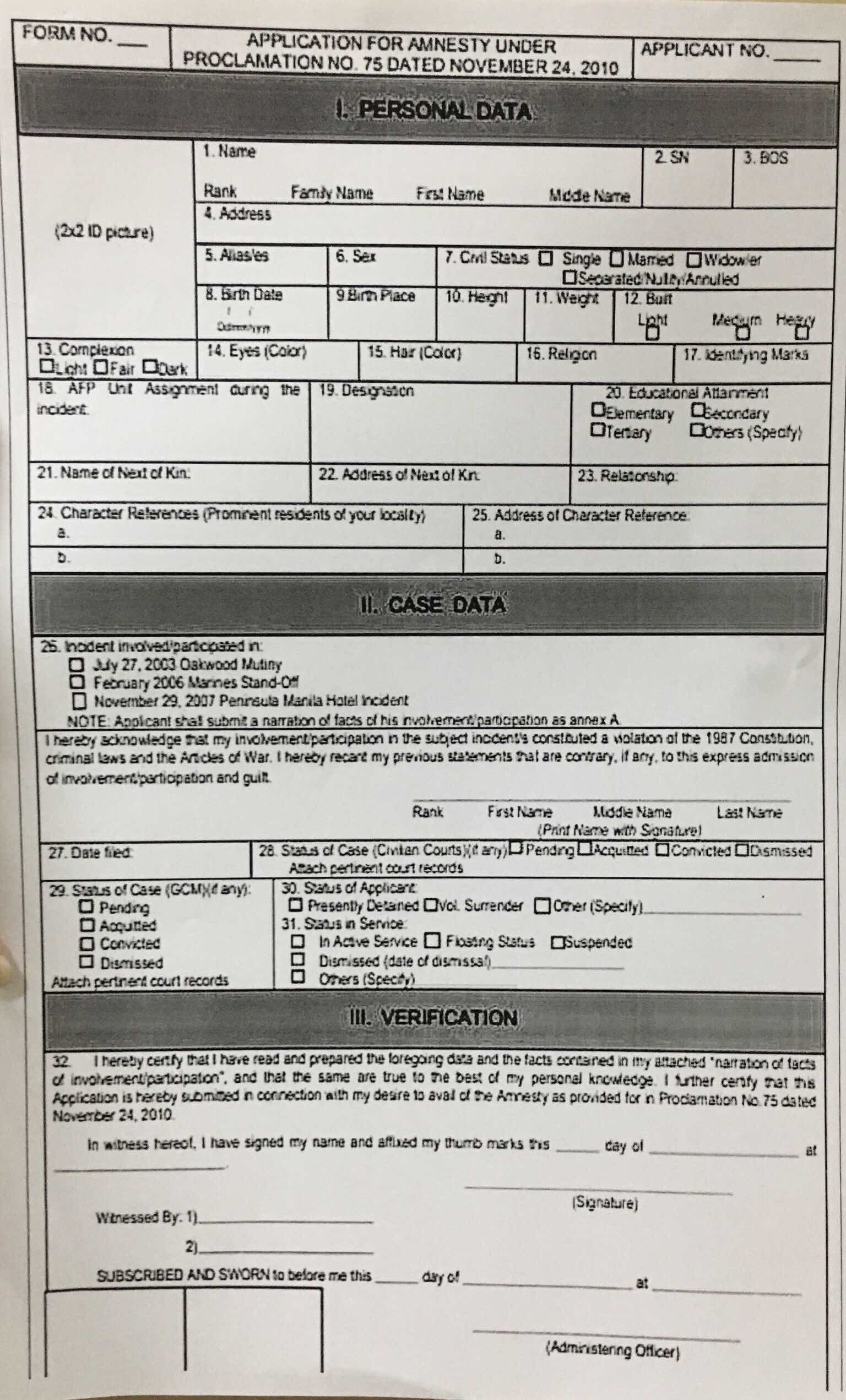 Lawyer Arno Sanidad said the DND resolution debunked the assertions in Duterte’s proclamation. It shows that Trillanes did file an application for amnesty and admitted guilt for violating crimes in relation to these coup attempts. (LOOK: Trillanes shows proof of amnesty application)

Trillanes, for example, checked “Oakwood Mutiny” and “Peninsula Manila Hotel Siege” as two of his crimes.

“That document testifies that he did apply. You also don’t apply for amnesty without admitting guilt,” Sanidad told Rappler.

“Public documents are, as a rule, evidence of the facts which gave rise to their execution, including its date,” Sanidad said. (READ: Trillanes amnesty application could’ve been ‘maliciously concealed’)

Duterte’s proclamation was based on a certification from the office of the Armed Forces of the Philippines Deputy Chief of Staff for Personnel (J1) that it doesn’t have a copy of the senator’s amnesty application. (READ: AFP on revocation of Trillanes’ amnesty: ‘Just following orders’) – Rappler.com