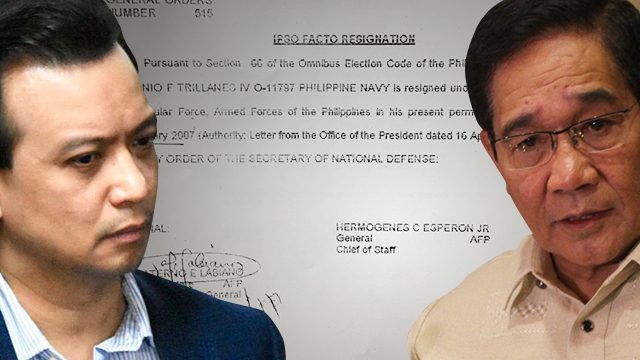 Facebook Twitter Copy URL
Copied
Four years before the amnesty grant in 2011, the military, under chief of staff Hermogenes Esperon Jr, already recognized the resignation of Antonio Trillanes IV from the Navy

MANILA, Philippines – Documents from the Department of National Defense (DND) and the Armed Forces of the Philippines (AFP) show that the “ipso facto resignation” of Senator Antonio Trillanes IV was recognized by the military as early as May 2007 – about 4 years before he was granted amnesty.

President Rodrigo Duterte’s National Security Adviser, retired General Hermogenes Esperon Jr, was Armed Forces of the Philippines chief of staff when the military processed Trillanes’ clearances, gave him his last pay, and issued a certification that he had resigned.

DND General Orders 515, signed on May 3, 2007, recognized the resignation of Trillanes as of February 6, 2007, citing the Omnibus Election Code of the Philippines. He was deemed resigned after he filed his certificate of candidacy for the senatorial race that year, which he won.

Section 66 of the Omnibus Election Code reads: “Candidates holding appointive office or positions. – Any person holding a public appointive office or position, including active members of the Armed Forces of the Philippines, and officers and employees in government-owned or controlled corporations, shall be considered ipso facto resigned from his office upon the filing of his certificate of candidacy.”

Documents from the Philippine Navy dated August 28 and August 29, 2007, also detailed his last payment as navy officer and his “major service clearance.”

One of the Navy documents also served as certification that Trillanes was “dropped from the paying jurisdiction of this unit effective 01 March 2007.”

President Rodrigo Duterte voided Trillanes’ amnesty on two grounds: that there is no document to prove he did apply for it, and that the former coup plotter did not acknowledge guilt for his participation in mutinies against the Arroyo administration. (READ: DOCUMENT: Proclamation No. 572 voiding Trillanes’ amnesty)

Documents obtained by Rappler indicate that Trillanes did both.

Trillanes called on the military to review its statements, laughing off the “absurdity” of making him face a court martial tribunal for the coup attempts he led in 2003 and 2007.

Trillanes said the documents show he had been a civilian long before he was granted amnesty, meaning the military could not regain jurisdiction over him.

“Gagawin ulit akong tinyente. Aba, hihirit ako ng backpay niyan,” Trillanes teased on Wednesday. (They will revert me to being a lieutenant. Oh my, I will ask for backpay.)

President Benigno Aquino III issued an amnesty proclamation covering Trillanes and other soldiers in December 2010. The process was completed in January 2011.