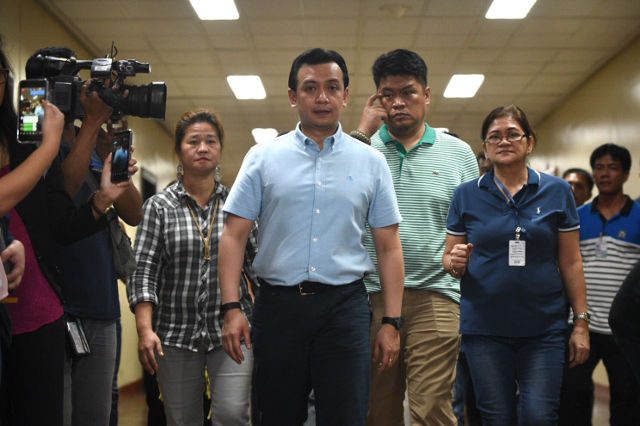 MANILA, Philippines (UPDATED) – An upset Senate President Vicente Sotto III asked the minority bloc not to abuse his hospitality, following some opposition senators’ call for Senator Antonio Trillanes IV’s supporters to troop to the Senate and protect him from an illegal arrest.

“I was expecting them to help me preserve the integrity and the sanctity of the institution and not abuse the hospitality of the Senate leadership,” he said in a separate interview.

Sotto, supported by majority of the senators, allowed Trillanes to stay in the building as he tries to exhaust legal solutions and in order to protect the institution.

“Nagkakatension na (There is already tension). I stuck my neck out to preserve the dignity of the Senate. I’m not doing this for any one person. Paano kung may mangyari diyan na mag-take over ng Senado or i-lock kung may mag plot diyan? (What if something happens there, a takeover of the Senate or lock the Senate?) Either way, I will be held responsible.

Trillanes’ supporters planned to hold a mass this weekend inside the Senate. But Sotto said he rejected the request for visitors. Sotto said Trillanes would only be allowed 20 visitors at a time.

“No need. There is a church nearby. Senate is closed on weekends. Only staff of senators are allowed. We have to turn off airconditioning at certain times and on weekends because it will bog down if they don’t,” Sotto said.

“We are just accommodating Senator Trillanes. I hope his supporters will not abuse our patience,” he added.

Various political camps, as well as the media, got word Thursday night, September 6, that the military was set to arrest Trillanes without warrant. Sotto gave assurances, however, that he will not allow any arrest in the chamber’s premises.

The office of Senator Leila de Lima, herself detained by the Duterte government, called on supporters and the media to be vigilant amid rumors of Trillanes’ impending arrest.

Senator Francis Pangilinan, in a statement Thursday night, said, “We call on friends and supporters who value democracy to come to the Senate and show their support for Senator Sonny. Our presence there will hopefully make those effecting the illegal arrest think twice.”

Responding to Sotto, Pangilinan said on Friday that his call was “not an abuse of consideration” but rather “supportive” of the Senate’s consensus that there should be no arrest inside its premises.

“We agree with the Senate President that we should henceforth work toward de-escalating tensions brought about by the controversial proclamation of amnesty revocation,” Pangilinan said in a statement. – Rappler.com