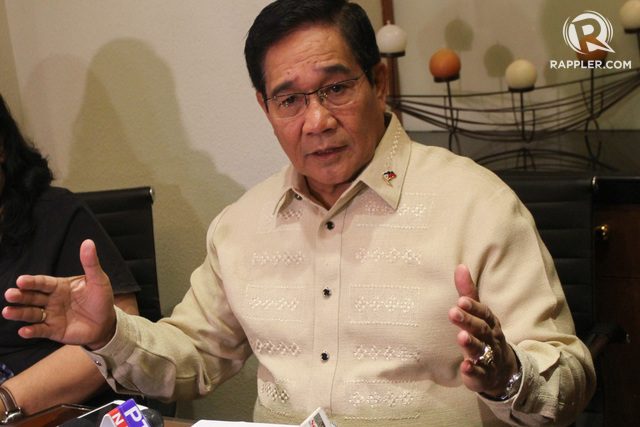 Facebook Twitter Copy URL
Copied
'Who is saying he is a soldier again? The AFP does not deserve his kind,' says National Security Adviser Hermogenes Esperon Jr

MANILA, Philippines – National Security Adviser Hermogenes Esperon Jr says Senator Antonio Trillanes IV is no longer a soldier, contradicting the Department of National Defense (DND) and Armed Forces of the Philippines (AFP) when they said the lawmaker has “reverted to active duty” after the voiding of his amnesty.

“Who is saying he is a soldier again? The AFP does not deserve his kind. Coup plotter, arrogant, megalomaniac,” Esperon said in a message to Rappler on Friday, September 7.

Rappler had asked for him to comment on documents that showed he himself recognized Trillanes’ resignation from the military in 2007 when he filed a certificate of candidacy to run for senator. Esperon was then the AFP chief of staff. Thus, Trillanes left the military 4 years before he was even granted amnesty by Benigno Aquino III.

“I didn’t recognize his resignation in relation to an amnesty that would come 4 years later. My act was in keeping with the provisions of the existing Omnibus Election Code,” said Esperon.

DND spokesman Arsenio Andolong had said Duterte’s Proclamation No 572 also voided Trillanes’ retirement from the military thus, still being in active duty, he can be tried by military courts in relation to the coup attempts against Gloria Macapagal-Arroyo.

While Esperon no longer considers Trillanes a soldier, he insisted that military courts have jurisdiction over him.

“Nonetheless, his resignation did not mean the Court Martial had lost jurisdiction over him. He committed offenses when he was still in the active service. His filing for candidacy for senator (or even for any elective positions such as councilor or barangay kagawad) did not extinguish his liabilities that may arise from his offenses,” he said.

However, military courts cover only soldiers, not civilians.

While Justice Secretary Menardo Guevarra had said a military arrest is faster, Duterte decided to not use that option and instead wait for a civil court to issue an arrest warrant for Trillanes.

Some Cabinet members had insisted during a Thursday meeting with him in Jordan that Trillanes could be tried by a military court.

“The other alternative was to invoke the military court proceedings and for the military to immediately re-acquire jurisdicton over him. It was explained that it can be done because unlike civil courts, the proceedings in court martial was pending,” said Roque in a Friday press briefing in Jordan.

Esperon was present at the meeting. – Rappler.com