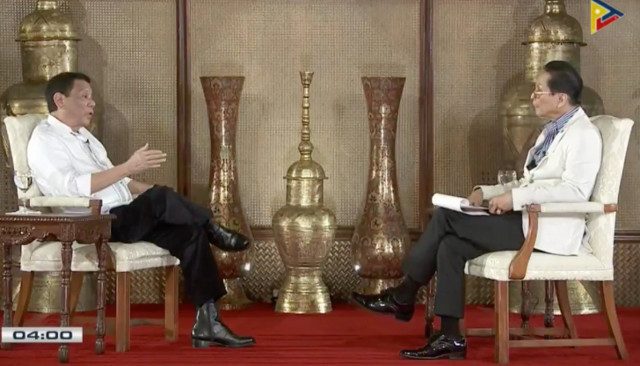 MANILA, Philippines (UPDATED) – President Rodrigo Duterte claimed that there were threats to “assassinate” him and seize government power on September 21, the 46th anniversary of the declaration martial law by deposed dictator Ferdinand Marcos.

In an interview dominated by his rants against his critics – particularly opposition Senator Antonio Trillanes IV – on Tuesday, September 11, Duterte said he had been told there were plans to have him killed.

(Someone said, that’s their plan now. If they can’t achieve their goal through explosions, they will assassinate.)

He even welcomed an assassination, saying it would be a quick death compared to dying due to a sickness.

He urged his perceived enemies to set their plans in motion early, and not wait until September 21.

He also spent much of the interview challenging the Armed Forces to stage a coup d’etat if they sided with Trillanes and  if they saw Duterte as an unfit leader.

“Walang katotohanan ‘yan,” he said on Tuesday. (There’s no truth to that.)

Pangilinan said that the administration’s claims of a plot were mere distraction tactics to shift attention from pressing problems like inflation and “missing” National Food Authority rice.

“Of course, we are the opposition. When we criticize, we are blamed. Criticizing is not destabilization,” he said in Filipino.

Defense Secretary Delfin Lorenzana on Monday, September 10, also dismissed rumors of a military-led destabilization plot, but claimed the Communist Party of the Philippines-New People’s Army is plotting to oust the Chief Executive.

On Wednesday, September 12, Philippine National Police Chief Oscar Albayalde said the PNP would “seriously verify” the President’s allegations of assassination attempts planned against him on September 21.

“He has unlimited access to information not only from the PNP but also all other agencies and it’s a serious threat,” he said. – with a report from Sofia Tomacruz/Rappler.com