SUMMARY: What Duterte said during Q and A with Panelo 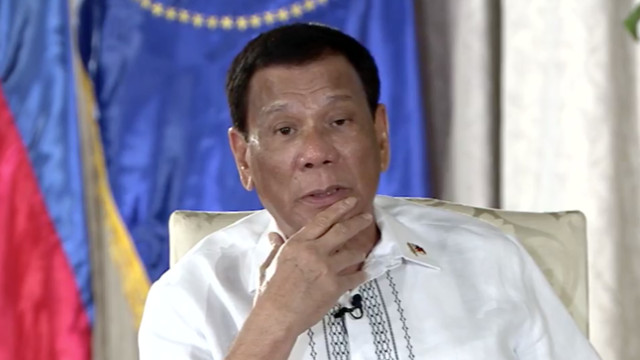 Panelo, whose job is to serve as Duterte’s lawyer, raised some 20 topics with the President – ranging from Senator Antonio Trillanes IV, to inflation, to the reopening of Boracay.

Notably, Duterte mentioned Trillanes 20 times and kept bringing him up even when talking about the economy and health programs.

Here’s what they talked about, in summary:

Trillanes. Duterte repeats his argument that Trillanes’ amnesty is void because the amnesty certificate was signed only by former defense secretary Voltaire Gazmin. Only a President can sign such documents, said Duterte. Panelo tries to back this up by citing a Supreme Court ruling. Here’s a factcheck on their claims. (READ: LIST: False claims of Duterte, Panelo about legal issues on Trillanes amnesty)

Health. Duterte doesn’t directly answer this question, choosing to rant against communist leader Joma Sison instead. Sison had floated rumors that Duterte had entered into a coma. The President claimed Sison, the Left, and Magdalo members are in “direct contact” with each other to overthrow his government. Duterte says Sison must face a trial.

Challenge to military. Duterte challenges the military to stage a mutiny if they are siding with Trillanes and think he, Duterte, is unfit for the presidency. (READ: Duterte dares AFP: You want another president? Fine)

Martial law in Mindanao. Duterte says martial law has “lessened criminality by and large” in Mindanao. He urges media to do a survey of local government leaders there to get a good picture of military rule.

Rising rice prices. Duterte expresses support for Agriculture Secretary Manny Piñol’s idea of allowing the entry of rice from Malaysia but imposing a tax on them. These rice imports are being smuggled into the Zamboanga-Basilan-Sulu-Tawi-Tawi (Zambasulta) area. If this “barter trade” is allowed to flourish, cheap rice would flood the region, said Duterte. He also said the perceived rice shortage jacking up rice prices is “artificial.” Imported rice is being hidden in rice traders’ warehouses, causing the supposed shortage. Despite this, Duterte is adamant that the “only” solution it to “import more” rice. Later on in the interview, Duterte emphasizes need to pass the rice tariffication bill.

Approaching storm. Panelo does not ask about Typhoon Mangkhut specifically but Duterte mentions it briefly in response to a question about local palay production. Saying bad weather is always a problem faced by Philippine agriculture, Duterte warns of “another one (storm) coming. “It will hit you by next day so better prepare to just take a break and lie down,” he says.

Inflation. Duterte admits inflation is high but says his economic managers are “working on it” and that it will be discussed during the Cabinet meeting later that day. He then says he is just waiting for someone “retiring” to assume a post that entails implementing the “orders of the economic managers.” He does not specify the person.

NFA Council abolition. He said he may recommend to Congress that the NFA Council be abolished as it “hinders operations” on rice. The NFA Council makes the policies on rice supply and rice importation which the NFA management implements. Duterte said that job can fall on the shoulders of just one person, “you need not have 4 or 5.”

Crackdown on drugs. Duterte says “petty crime in the streets has lessened.” Told about claims of human rights abuses, he admits some police and Philippine Drug Enforcement Agency personnel are involved in illegal drugs. He likens them to Trillanes who he accuses of having many secret housing. Duterte claims Trillanes’ mother bagged deals to supply the Navy with supplies. The senator denies the accusations.

Programs for the handicapped. Duterte recalls his P100-million assistance to the Philippine General Hospital. But he returns to railing about the AFP general hospital and how Trillanes supposedly doesn’t care as much about the military as he does.

EDSA traffic. Duterte says he tried to suggest to Congress to give him emergency powers so he can fully address the problem. But when he heard lawmakers were worried such powers would be abused, he decided to drop the suggestion.

Boracay shutdown. Duterte said he will wait for the recommendation of Department of Interior and Local Government, Department of Tourism, and Department of Environment and Natural Resources on when the island will be reopened.

Mining. Duterte agrees mining can be a source of revenue for the government but talks of the many “holes in the ground” caused by mining.

3rd telco player. Duterte wants the 3rd telco player named by November or before Christmas. He said if there are any more delays, he would do the selecting himself. After reading the “position papers” of the interested parties, he would choose the “best” and “most expensive.”

Tax reform. Panelo asks Duterte if he will stop the implementation of the Tax Reform for Acceleration and Inclusion law or TRAIN. Duterte defends the measure saying his only source of funds to implement his projects is taxes.

Infrastructure projects. Duterte says there are many of them being pursued under his administration but points out the “ecological questions” some of these proposals raise , such as those that involve reclamation, destruction of marine life.

Xiamen Airlines fiasco, new airports. Duterte says airports must have Plan A and Plan B for such situations. He reminds the public of plans to construct new airports in Sangley, Cavite and Bulacan.

Tourism, distribution of resources. Duterte says he wants government resources to be spread equally among regions, regardless of politics. He recalls he visited Marawi frequently to touch base with soldiers then connects this to Trillanes who he says never dropped by Marawi.

Federalism. Duterte admits government can’t convince everyone to support federalism. He describes it as one solution to spreading the country’s wealth to regions outside Metro Manila.

Wishes, regrets after two years as President. Duterte says he has no regrets about his presidency.

Last words to viewers. Duterte again brings up Trillanes and tells Filipinos not to believe critics who call him a dictator. He said he is merely a hardliner when it comes to fighting drugs and protecting the country.

Assassination, sabotage. Duterte claims there are plans to assassinate him on September 21, 46th anniversary of martial law under the late dictator Ferdinand Marcos.