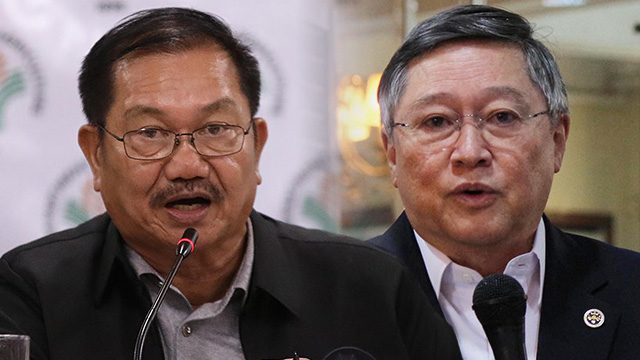 MANILA, Philippines – President Rodrigo Duterte decided to greenlight the lifting of restrictions on rice importation following a “fierce” discussion between at least two secretaries during the Cabinet meeting on Monday, October 8.

“He wants to flood the market with rice so even if prices of crude oil should go up still further, people would still have access to rice,” he added.

Opening up rice importation means “anyone who can afford it and will pay tariffs for rice will be allowed to import rice,” said Roque.

This was the position taken by Finance Secretary Sonny Dominguez, among the more influential members of the Cabinet. Duterte ended up siding with his economic manager and childhood friend.

According to a source present at the meeting, Dominguez pushed for “no restrictions” and for market forces to determine rice importation and supply in the country.

Piñol, said the source, wanted to impose an obligation for rice to be sold at certain prices. Roque, meanwhile, had said that some Cabinet members had defended the “status quo” and said it was “not impeding rice importation.”

Piñol has been of the position that unimpeded rice importation will harm local farmers whose products will not be able to compete with the cheaper rice from abroad.

The same source described Dominguez’ and Piñol’s debate as a “showdown.”

Roque conceded that there was a “principled and fierce discussion” where tempers were “close” to flaring up. But he declined to confirm if the two secretaries involved were Dominguez and Piñol.

Aside from Dominguez, Socioeconomic Planning Secretary Ernesto Pernia is also known to support the lifting of quantitative restrictions on rice in favor of imposing tariffs.

The so-called “full liberalization” of rice importation would clip the powers of the NFA, over which Piñol, as NFAC chairman has direct oversight.

“It no longer has the power to accredit who will import, how much will be imported,” said Roque.

The NFA, created through a Marcos-time presidential decree later on amended, is authorized to import rice in order to ensure sufficient supply of the food staple, in case of emergencies or crisis situations.

But economic think tanks and lawmakers have criticized what has become an NFA “monopoly” in importing rice. Private rice importers currently can only import rice within amounts set by the NFAC and must secure accreditation from the NFA.

With the opening up of rice importation, private rice importers need only obtain import permits and pay tariffs in order to bring as much rice as they want from suppliers abroad, said Roque.

This is similar to rice tariffication bills which Duterte has already certified as urgent. But Roque said the executive branch “will not wait” for such a law to be passed. He denied there is any need to issue an executive order to implement Duterte’s decision.

Back in April, Duterte had already floated the idea of doing away with rice importation restrictions.

Last September 11, Duterte said he would be replacing NFA Administrator Jason Aquino after he had supposedly asked to be relieved. Soon after, the President announced he would tap army chief Lieutenant General Rolando Bautista for the job of NFA chief.

However, Duterte would soon announce he had offered Bautista another position – that of social welfare secretary. – Rappler.com