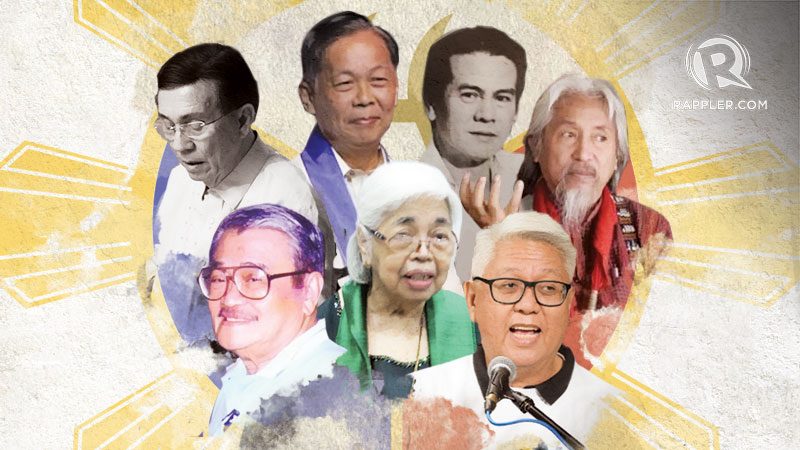 MANILA, Philippines – Seven giants in Philippine art and culture will be named National Artists on Wednesday, October 24, in a ceremony in Malacañang.

In a move sure to frustrate Noranians, actress Nora Aunor is again not on the list of awardees this year. (READ: Nora Aunor: A National Artist we deserve)

Malacañang sent the list to reporters late Tuesday afternoon, October 23, although a source involved in the selection process said the awardees were “proclaimed” Monday night, October 22. A few artists and literary writers had posted their versions of the list on social media earlier in the week.

The Order of National Artists is the highest recognition given by the government to Filipinos who have made significant contributions to the development of Philippine arts. The Philippine president names them based on the recommendations of the National Commission for Culture and the Arts and the Cultural Center of the Philippines (CCP).

The country’s 7 new National Artists are:

Editorial cartoonist and illustrator Alcala’s pen brought to life the cartoon series Slice of Life in the Weekend Magazine, Mang Ambo in the Weekly Graphic, and Kalabog en Bosyo, the first comic strip where characters spoke in Taglish. His many works portrayed the idiosyncracies of the Filipino, especially our ability to laugh at ourselves in the face of great adversity, as personified in the character of Mang Ambo. The two detectives in Kalabog en Bosyo were brought to the big screen and played by comedians Dolphy and Panchito in a film by Sampaguita Pictures. Alcala died in 2002 at the age of 75.

For her work in writing plays, promoting children’s theater, and puppetry, Bonifacio has been called the “Grande Dame of Southeast Asian Children’s Theater.” She has penned 40 plays, 20 books, and 30 stories, according to panitikan.ph, and was chairperson of the University of the Philippines’ Creative Writing Program. She founded Teatrong Mulat ng Pilipinas, a children’s theater and puppetry troupe based in UP.

“Mr C” is perhaps the most famous Filipino composer in recent history. He has composed musical scores for award-winning films, 10 full-length Filipino musicals, full-length ballets, a major opera, and a plethora of songs, including beloved classics like “Tuwing Umuulan at Kapiling Ka” and “Da Coconut Nut.” A force for original Pilipino music, he has spearheaded the Philippine Popular Music Festival and served as judge in talent shows, like Philippine Idol and Philippine Dream Academy. He leads the 7-member Ryan Cayabyab Singers.

If Mañosa is a name unknown to you, the same likely cannot be said of his iconic works. The architect known for his modern interpretation of Philippine architectural design and use of indigenous materials is behind the Coconut Palace, world-famous Amanpulo Resort in Palawan, Pearl Farm in Samal Island, Shangri-La Hotel in Mactan, and the San Miguel building in Mandaluyong, among others. For his pioneering vision and promotion of indigenous Filipino architecture, Mañosa has garnered many accolades, both locally and internationally.

Mojares is a multi-awarded writer, historian, and literary critic. His works include Origins and Rise of the Filipino Novel, The War Against the Americans, and books about eminent Filipinos, such as Vicente Sotto, Pedro Paterno, Isabelo delos Reyes, and Trinidad Pardo de Tavera. He has won several National Book Awards from the Manila Critics Circle and founded the Cebuano Studies Center, a library and research center dedicated to Cebuano culture and history.

Muzones is the preeminent name in West Visayan fiction. He is best known for his Hiligaynon novel Margosatubig: The Story of Salagunting, about a fictional Muslim state in Mindanao and the struggles of its hero, Salagunting, to wrest it from the clutches of usurpers. A tale that combines intrigue, romance, pre-colonial lore, fantasy, and adventure, it unfolded as a series in the Hiligaynon magazine Yuhum. In 1989, he received the Gawad CCP para sa Sining, an award given every 3 years to artists whose works have enriched their art form. His proclamation as National Artist is posthumous as Muzones died in 1992.

Widely regarded as the father of independent Philippine cinema, Kidlat Tahimik (real name: Eric de Guia) is known for creating films that humorously but evocatively critique neocolonialism. A native of Baguio City, Tahimik has garnered numerous international and local awards for his films. His first, Perfumed Nightmare (1977), won the International Critics Award at the Berlin Film Festival. He has gone on to inspire generations of Filipino filmmakers to forge on with their independent vision, regardless of commercial considerations. In 2009, he received the UP Gawad Plaridel Award, the University of the Philippines’ highest award recognizing achievements in media.

The 3 female weavers given the Gawad sa Manlilikha ng Bayan award or named National Living Treasures in 2017 will also formally receive their award on Wednesday.

The 3 National Living Treasures are:

Yabing Dulo, also known as Fu Yabing, is a master of the craft of Mabal Tabih, a craft belonging to the B’laan tribe in Polomolok, South Cotabato. She learned the craft at the age of 10. Tabih is a woven textile made from abaca and natural dyes. Spiritually important to the B’laan, Tabih is used to make blankets, traditional skirts, and long-sleeved blouses. It makes use of designs inspired from nature or dreams.

Apuh Ambalang, as she is called, is famous in her hometown of Lamitan and beyond for her mastery of even the most intricate of Yakan weaving styles. She is particularly unique for her seputangan creations. Seputangan is a special cloth placed on the shoulders of brides and grooms during weddings and boasts intricate designs. Apuh Ambalang can execute even the smallest designs, from the dawen-dawen (leaf-like) to the dinglu or mata (diamond/eye) patterns.

Bantilan, who hails from Sarangani, is recognized for her exemplary execution of B’laan mat or igem weaving techniques. B’laan mats, created using only deft hands, feature brilliantly-colored geometric designs and patterns made from dyed leaf strips.