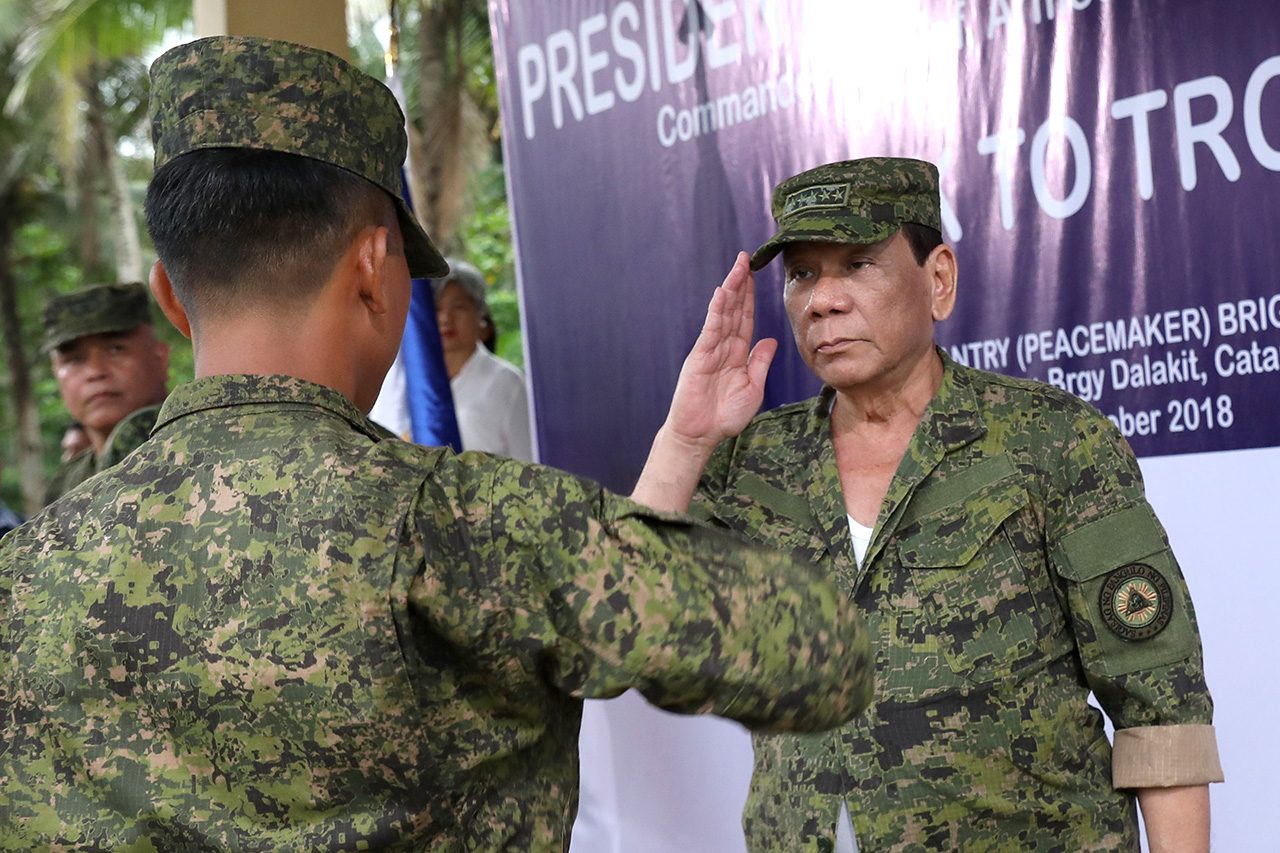 MANILA, Philippines (UPDATED) – President Rodrigo Duterte agrees with his critics that there is a militarization of the government under his administration.

“They say, ‘militarization of the government.’ Correct!” he said  during the distribution of Certificates of Land Ownership Awards to farmers in Cagayan de Oro on Wednesday, October 31.

He defended his penchant for appointing former military or police personnel into key civilian posts, saying persons who served in the military are less likely to “debate” with him when implementing government policies.

“That’s why I like military men. There are very few of us remaining who are – almost everyone is from the military except for Dabs (former TESDA chief Guiling Mamondiong), me, Medialdea. Why? I have no fight with the bureaucracy but with the bureaucracy, it will take them forever. They will even debate with you,” he said in Bisaya.

“Even in a disaster, fire, or flood, the fools are gone, they’re still drinking,” he added.

Critics sounded the alarm over the apparent militarization of the government after Duterte ordered the Armed Forces of the Philippines (AFP) to “take over” the Bureau of Customs (BOC).

The 1987 Constitution prohibits active military personnel from being appointed or designated to a civilian position in any capacity and at any time. (READ: Soldiers in Customs? But Constitution bars civilian assignments for military)

He said no matter how honest and competent the two appointees are, the nature of the work in Customs means there will always be a time when contraband will pass through.

“Every day, 7,000 containers pass through, on average…. Something will really get past you,” he said.

The only solution, he said, is to have more X-ray machines.

“The best thing to do there is to buy another X-ray machine,” said Duterte.

The President also credited former military men for the rehabilitation of Boracay, which opened only last October 26, after 6 months of closure to allow government agencies to address pollution. (READ: Boracay: Paradise reborn?)

He said the rehabilitation would not have been possible if he had not put former Armed Forces chiefs – Eduardo Año, current Department of the Interior and Local Government officer-in-charge; and Environment Secretary Roy Cimatu – in charge.

After praising the virtues of military men, Duterte echoed a theory shared by the military and police in relation to the massacre of 9 farmers in Sagay, Negros Occidental.

He said communist rebels were likely behind the attack.

“The incident in Bacolod, although I wasn’t able to go there because we took off at night and there was a thunderstorm so I had to go back. So but the style of the communists is they kill their own comrades and blame it on the – the NPA are such fools,” he said.

AFP chief General Carlito Galvez Jr had previously said New People’s Army (NPA) rebels were occupying public and private lands in order to cause tension, in the hopes of sparking violence that would then discredit the Duterte administration.

In his speech, Duterte warned communists not to do this.

“Do not confiscate, seize, or occupy land that isn’t yours,” he said.

The President, in a previous speech, warned Leftists he is “ready to do anything to establish order.”

Martial law in Mindanao is set to end in two months, or on December 31. The AFP and PNP are preparing their recommendation to Duterte on whether it should be extended.

The government included the communist threat to justify its previous request to extend martial law which was granted by Congress.  – Rappler.com