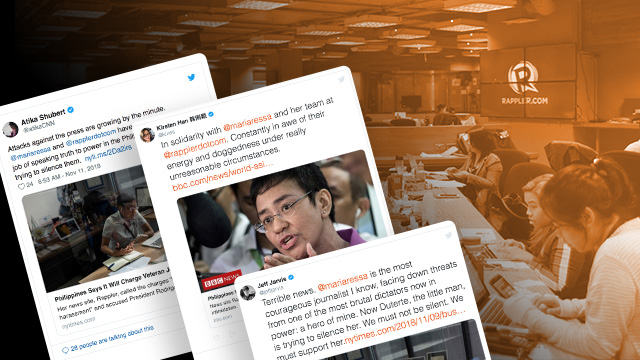 MANILA, Philippines (UPDATED) – Journalists, scholars, media groups and non-governmental organizations voiced out their support for Rappler as it faces legal battles triggered by the administration of President Rodrigo Duterte.

On Twitter, they slammed the November 9 announcement of the Department of Justice (DOJ) to indict Rappler Holdings Corporation (RHC) for tax evasion, an allegation that the company maintains is baseless.

David Kaye, United Nations special rapporteur on the promotion and protection of the right to freedom of opinion and expression, called the move a “travesty.”

this is an absolute travesty, an effort by Duterte to shut down one of the most innovative press outlets in the #Philippines and one of the great journalistic entrepreneurs around, @mariaressa https://t.co/MZhXWElfFu

They also noted that the situation reflects a global phenomenon.

Nobody questions President Duterte the way my friend and colleague @mariaressa does. Nobody challenges the Philippines government with as much courage. Nobody deserves support more than she and her team at @rapplerdotcom https://t.co/2nnnUPjB4w

Attacks against the press are growing by the minute. @mariaressa and @rapplerdotcom have done an outstanding job of speaking truth to power in the Philippines. Now the govt is trying to silence them. https://t.co/gU7zrSbzRG

This is an outrage. @mariaressa is a journalist of the highest integrity. https://t.co/RuK1w61m0d

An attack on one of the world’s bravest journalists. https://t.co/Jy0L2rFHvq

Every journalist needs to share this. @mariaressa has been a beacon of energetic reporting in Duterte’s dark world https://t.co/0x5VjUvTkR

The Reuters Institute for the Study of Journalism said the tax evasion case is the “latest attempt to intimidate independent journalists and silence one of the few critical news outlets left in the country.”

Reporters Without Borders also condemned the charges and called for an end to “this blatant judicial harassment.” In a statement, Daniel Bastard, head of RSF’s Asia-Pacific desk, said: “These crude ploys that the Philippine authorities are using against Rappler could be dismissed as bordering on the absurd if it were not for the serious threat they pose to this symbol of press freedom.”

Bastard added that the case “is clearly designed to bring down a media outlet that dares to provide investigative coverage of President Duterte’s policies.”

A global network of editors, media executives and leading journalists for press freedom also condemned Rappler Holding’s and Ressa’s indictment. In a statement, the International Press Institute (IPI) said President Rodrigo Duterte “is increasingly seeking to silence his critics by any means. Unable to withstand genuine and harsh criticism of his government, he is attempting to shut down Rappler and silence Maria Ressa on retaliatory tax charges.”

Earlier this year, IPI and International Media Support (IMS) named Rappler as its 2018 Free Media Pioneer “in recognition of the Philippine news site’s “innovative approach to journalism and audience engagement as well as its determination to hold authorities accountable despite aggressive attacks on its operations.”

Human Rights Watch on November 10 also said the indictment is a “clear desperate attempt by the administration of President Rodrigo Duterte to shut down one of the critical voices in Philippine journalism.”

On Tuesday, November 13, the Jakarta Foreign Correspondents’ Club expressed its concern, noting that Ressa, who was previously based in Jakarta for CNN, was a former president of the club.

The Southeast Asian Press Alliance also issued a statement  about its “grave concern” over Rappler’s and Ressa’s indictment, saying this shows “deeply disturbing demonstration” of the Duterte administration’s efforts to “cow Rappler into silence.”

In a letter to President Duterte, the Pakistan Press Foundation  said it also expressed concern and called on authorities to end “judicial harassment.”

On November 20, the National Democratic Institute and its chairperson, former US secretary of state Madeleine Albright denounced government measures to “silence” Rappler and Ressa. “Democracy cannot live without the freedom of the press. The brave work of independent media is necessary to protect the truth and defend democratic discourse,” said Albright in a statement.

The indictment is the latest in a string of cases filed against Rappler since January 2017. (READ: FAQs: Rappler’s SEC case)

The media organization, however, maintains “this is a clear form of continuing intimidation and harassment” and “an attempt to silence reporting that does not please the administration.” (Read Rappler’s full statement here.) – Rappler.com