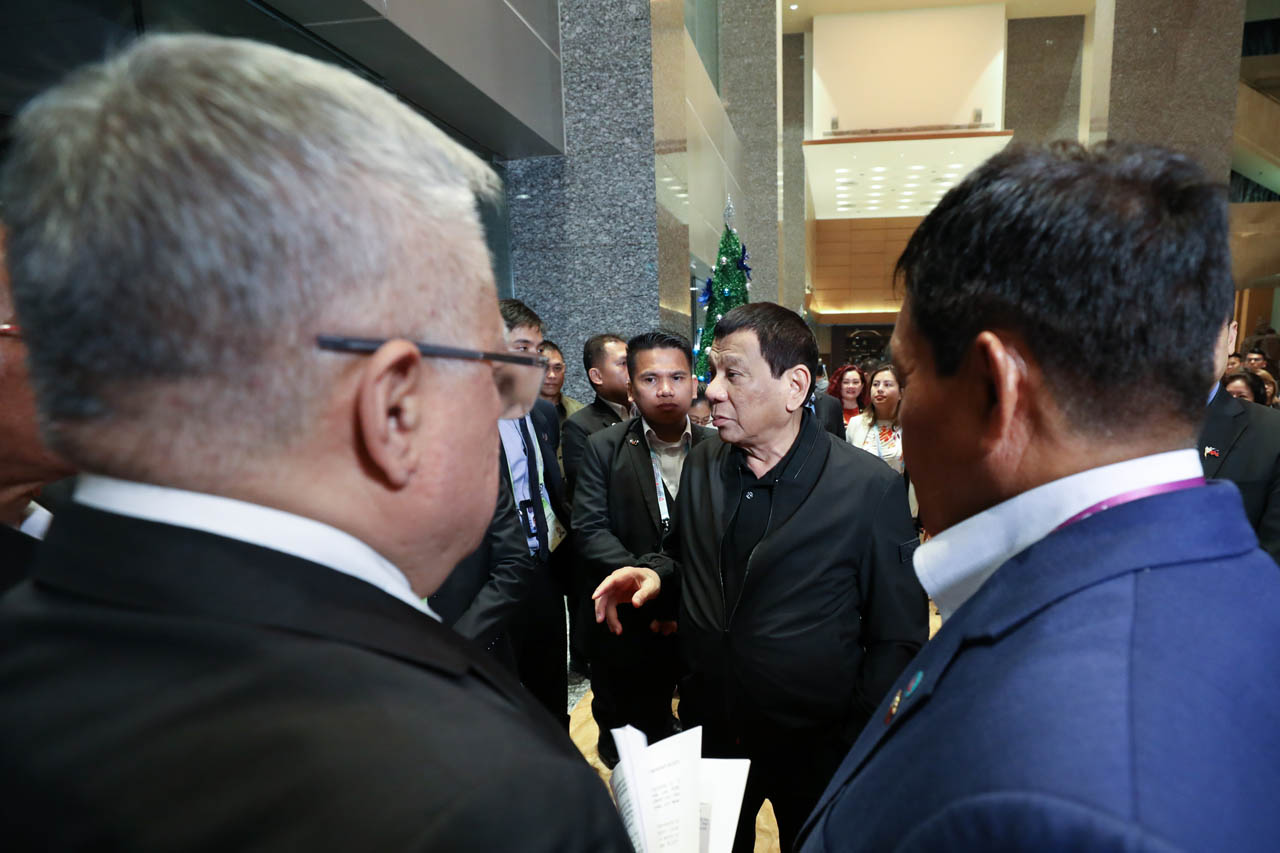 MANILA, Philippines – Philippine President Rodrigo Duterte was absent from 4 major gatherings with other leaders in Singapore because he had to take “power naps.”

This was Malacañang’s explanation for Duterte’s non-appearance in 4 events at the 33rd Association of Southeast Asian Nations (ASEAN) Summit and Related Summits on Wednesday, November 14.

“He took power naps to catch [up] on sleep,” said Presidential Spokesperson and Chief Presidential Legal Counsel Salvador Panelo in a statement sent on Wednesday night.

By the time Panelo sent his statement, Duterte had missed these 4 events:

Duterte is set to miss yet another event. According to Panelo, the Philippine President will not be attending the gala dinner on Wednesday night.

“PRRD (President Rodrigo Roa Duterte) will also not attend the gala dinner scheduled tonight and will instead rest,” said Panelo.

To explain Duterte’s need for “power naps,” the spokesman spoke of the President’s long Tuesday night.

“Last night, the President worked late and had only less than 3 hours of sleep. It is unfortunate that the first event scheduled today was at 8:30 am,” he said.

Duterte is known to be a late sleeper who also typically starts his day late, usually after lunch.

Panelo said Duterte’s absence from the Wednesday ASEAN events is not connected to his state of health.

“We assure the nation that his aforementioned absence has nothing to do with his physical health and well-being which have been the subject of speculation. The President’s constantly punishing work schedule is proof that he is in top physical shape,” said Panelo.

The spokesman even said he found it “amusing” that “some quarters” appear to be “making a big fuss” of Duterte’s non-appearances.

What Duterte did that day

While he may have skipped some events, Malacañang listed the activities Duterte was able to attend.

The President made it to 3 events on Wednesday: the ASEAN-China Summit, ASEAN-Russia Summit, and ASEAN-Japan Summit.

Panelo also said Duterte witnessed the signing of the Memorandum of Understanding (MOU) on Economic Cooperation between the Eurasian Economic Commission (EEC) and ASEAN.

On Thursday, November 15, the President is set to attend the rest of the events and have a meeting with Japanese Prime Minister Shinzo Abe, according to Panelo.

Duterte’s non-appearance in some of Wednesday’s events is a repetition of similar behavior in previous international conferences.

In past ASEAN and Asia-Pacific Economic Cooperation summits, Duterte had also skipped one or two events.

Here’s a list of other events at past international gatherings he has missed:

Duterte did not miss events during the ASEAN Summit in 2017 since that year, the Philippines was the host. Organizers then had said, as ASEAN chairman, Duterte could not be absent at any of the activities. – Rappler.com