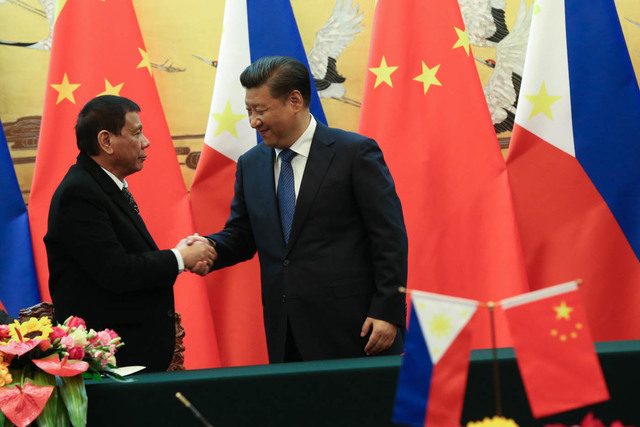 MANILA, Philippines – Ahead of Chinese President Xi Jinping’s state visit, two opposition senators filed a resolution calling for President Rodrigo Duterte to release the “definitive draft” of the oil and gas deals with China before signing.

“It is hereby resolved… as a matter of paramount public interest, to urge the Executive Department to release the definitive draft of the oil and gas agreement with China, or any other agreement involving Philippine natural resources, before the signing of such agreement and urge the Executive Department not to sign any agreement with China or any other State which diminishes the Philippines’ exclusive rights,” Trillanes and Pangilinan said in their resolution.

Trillanes and Pangilinan said there are allegations that China created a draft agreement. Signing the document, they said, violates the 1987 Constitution.

“There are allegations that China produced a draft entitled ‘Framework Agreement on Joint Maritime Oil and Gas Exploration between China and the Philippines’ establishing a Committee and Working Group, composed of Chinese and Philippine nationals, which will operate as the working mechanism for joint oil and gas exploration,” they said.

Recognizing the Chinese draft, they added, “will make the Philippines recognize an unlawful co-ownership with China of the West Philippine Sea.”

“This will fulfill President Rodrigo Duterte’s alarming statement that China’s offer of joint exploration… which is like co-ownership. It’s like the two of us would be owners. I think that’s better than fighting,” they added.

Article 2, Section 12 of the 1987 Constitution partly states that the exploration, development, and utilization of natural resources shall be under the full control and supervision of the State.

It also provides that “the State shall protect the nation’s marine wealth in its archipelagic waters, territorial sea, and exclusive economic zone, and reserve its use and enjoyment to Filipino citizens.”

In July 2016, the Philippines won a historic case against China at a Hague tribunal, which upheld Manila’s rights over the West Philippine Sea. Duterte, however, has set aside the victory to gain loans and grants from Beijing. (READ: 2 years after winning, Duterte refuses to enforce Hague ruling) – Rappler.com