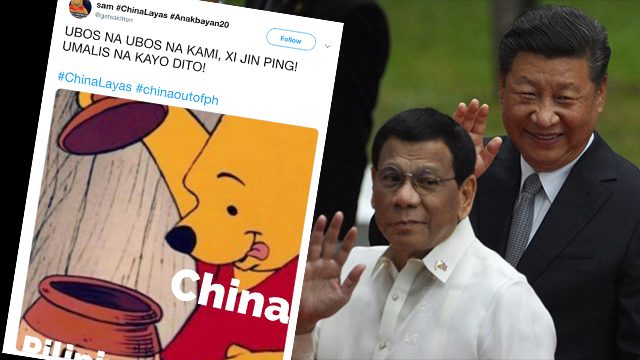 MANILA, Philippines – Trust the world’s social media capital to give one of the world’s most powerful leaders its usual welcome greeting: memes.

China’s President Xi Jinping arrived in Manila on Tuesday, November 20, for a two-day state visit. The Philippines rolled out the red carpet for Xi, who met with President Rodrigo Duterte in Malacañang where a state banquet was held in his honor.

But it was a different form of welcome that greeted Xi online.

Before the Chinese leader’s arrival, Filipinos critical of the Duterte administration’s friendship with China changed their profile photos to the image of Winnie the Pooh. Recall that China has a long-standing ban on the beloved A. A. Milne character, ostensibly because of frequent comparisons made between Pooh and Xi.

On Tuesday after Xi’s arrival, more netizens stepped up their game through Xi-Pooh memes.

Here, for example, Barurot News tweeted a photo of Xi and Winnie the Pooh side by side.

Today is National Winnie the Pooh Day: "A fine day to visit Piglet"#XiJinpingPHhttps://t.co/ToJttKH76U

Happy Winnie the Pooh Day! We alsu wunt our uwn yummy hunny too.

Some users simply tweeted edited photos of Duterte and Pooh.

The Chinese President with his favorite puppy.

Here are other #XiJinPooh memes that are circulating on Twitter:

Do you have any funny #XiJinPooh memes you want to share? Let us know in the comments section below. – Rappler.com