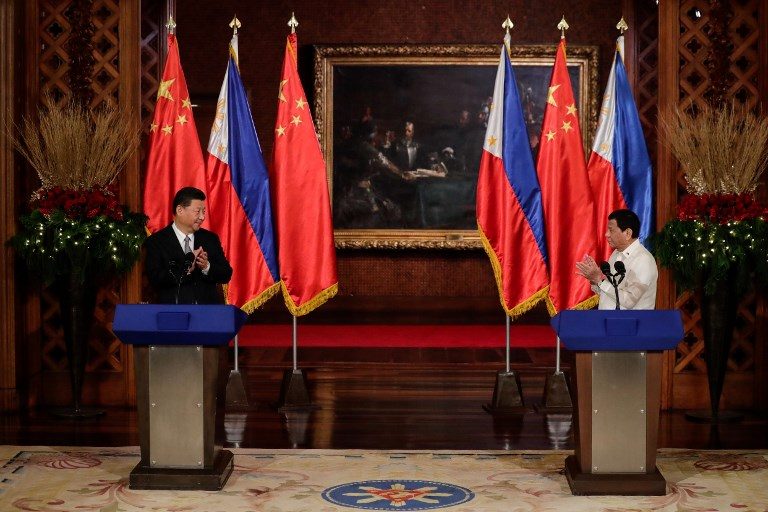 Facebook Twitter Copy URL
Copied
Up to the last minute, uncertainty clouded what kind of oil and gas deal would come out of Xi's state visit. The MOU appears to be a softer version of the framework earlier prepared.

MANILA, Philippines (UPDATED) – The memorandum of understanding (MOU) between the Philippines and China on oil and gas development in the West Philippine Sea creates a body that will study how the two countries can pursue joint exploration and development.

A government source privy to the MOU told Rappler that the MOU does not mean the immediate conduct of joint exploration or joint development of marine resources. But it does pave the way for the crafting of a program on how such joint ventures can happen in the future.

The MOU was among 29 documents signed and exchanged by Philippine and Chinese officials during Chinese President Xi Jinping’s state visit in Manila on Tuesday, November 20.

Philippine Foreign Secretary Teodoro Locsin Jr said in a tweet that he had largely written the MOU that was signed and exchanged in front of Xi and President Rodrigo Duterte. This was confirmed by Rappler’s source on Wednesday, November 21, a day after the MOU exchange.

In an interview with reporters right before the welcome ceremony for Xi on Tuesday, Locsin described the document as “non-legally binding.”

“It’s a framework, it’s a non-legally-binding framework. It shows how you are to proceed so you can prepare for when you start negotiating then you know that is the procedure,” he said.

As to the geographic coverage of the framework, the agreement is designed to “govern an area once that area has been agreed upon according to the framework.”

The document written by Locsin is different from the “Framework Agreement on Joint Maritime Oil and Gas Exploration between China and the Philippines” that had supposedly been drafted by Chinese officials.

This framework agreement had “pending issues” on language and wording and thus could not be signed, said another source.

The MOU that was eventually exchanged represented what the Philippines and China find acceptable at the moment, said the source who had seen the document.

The deal creates an inter-governmental committee that will work out a program of cooperation that could lead to joint exploration, said the source on Tuesday.

The committee will be composed of officials from the Department of Foreign Affairs, Chinese Foreign Ministry, Department of Energy, and Chinese Energy Ministry.

Another entity, a working group, will be composed of representatives from oil firms chosen by the Philippine and China governments to undertake joint exploration.

Philippine Energy Secretary Alfonso Cusi had explained the MOU in a similar manner to reporters.

“It is just a memorandum of cooperation to explore a solution,” he said.

He added later through a message that by “solution” he meant “solutions on how we (Philippines) can enjoy resources in the area” of the West Philippine Sea.

The government is yet to release a copy of the MOU, despite calls from sectors for them to be transparent about the entire process of engaging China on joint development in the West Philippine Sea.

Former foreign secretary Albert del Rosario called on negotiators of the document to “ensure that our Constitution is not violated and our tribunal outcome is not undermined,” referring to the 2016 legal victory won by the Philippines against China’s claim to the West Philippine Sea.

An early DFA version of the document seen by Rappler states that the Philippine oil firm that will be part of the working group will be the firm that possesses the service contract for that particular area. Otherwise, it will be the Philippine National Oil Company – Exploration Company (PNOC-EC).

This document was the Philippines’ counterdraft to the one prepared by the Chinese. It has since been amended.

Up to the last minute, uncertainty clouded what kind of oil and gas deal would come out of Xi’s state visit.

Mere hours before the Chinese leader landed in Manila, officials were still not sure if a framework agreement on joint exploration would be signed.

It’s not yet clear why the two countries decided not to sign the framework agreement.

But Rappler learned that the Philippines had raised concerns about a line in a Chinese-proposed draft, specifically the line that deals with the “relevant position” on the maritime claims of the two countries.

The relevant position line in the Chinese draft goes: “The joint oil and gas exploration shall not affect the respective positions on sovereignty and maritime rights and interests of the two parties.”

There had been a suggestion from the Philippines for the phrase “according to international law” to be added to the line. The phrase would have called to mind the 2016 legal victory won by the Philippines that declared China’s claim to the West Philippine Sea as invalid. China continues to ignore the ruling.

This is different from the “relevant position” line in a DFA draft which reads: “This Memorandum of Understanding, and all discussions, negotiations and activities of the two governments or their authorized enterprises under or pursuant to this Memorandum of Understanding, will be without prejudice to the respective legal positions of both governments.”

Any joint exploration agreement will likely face challenges on constitutionality in the Philippines.

The Philippine Supreme Court is yet to decide on the constitutionality of a 2005 joint exploration deal among the Philippines, China, and Vietnam signed during the Arroyo administration.

Those who oppose the old deal allege that it violates the 1987 Constitution’s provisions that require that marine wealth in the exclusive economic zone be used “exclusively” by Filipinos. – Rappler.com