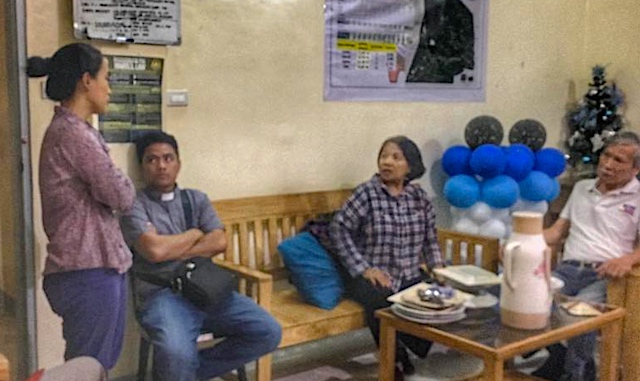 Ocampo and Castro had just come from a humanitarian mission in Talaingod, Davao del Norte, when they were arrested at a checkpoint in Barangay Sto Niño, Senior Superintendent Ferlu Silvio, Davao del Norte provincial police chief, said on Thursday, November 29.

He said the checkpoint was put up after authorities received information that a group of people were coming out of a remote area of Talaingod, known to be a communist-infested area.

Silvio said Ocampo and several other individuals, many of them children, were on several vans and were flagged down at a checkpoint in Barangay Sto Niño as they were leaving Talaingod.

He told Rappler that upon checking, the vans had many children from areas such as North Cotabato and Bukidnon.

“They are still being questioned to determine why they were traveling with the minors and what the minors are doing with them,” Silvio said in a phone interview on Thursday.

Philippine National Police Spokesman Benigno Durana said in a text message to Rappler that about 14 minors, aged 14 to 17, were among those in the vehicles.

Davao del Norte police later confirmed that they were preparing kidnapping and huma trafficking charges against the group.

Ocampo, Castro, and their companions were beingdetained at the Talaingod Police Station.

Two Kabataan party list members are among those being detained. Kabataan said in a statement that Ocampo’s convoy was attacked by unidentified individuals who threw rocks at one van and spikes on the road.

In a statement, the Salugpongan Ta’Tanu Igkanogon Community Learning Center Incorporated said the children were students of the STTICLC school in Sitio Dulyan, Barangay Palma Gil in Talaingod, who were being evacuated due to alleged harassment by state forces.

Nolasco said the military wanted to shut down the school, which the Department of Education had recognized as a legitimate learning institution for the Lumad in the area.

Based on information from militant groups in Southern Mindanao, Ocampo and Castro, along with leaders of progressive groups, went to the area on a solidarity mission which included the delivery of school supplies and other goods on Wednesday.

Save Our Schools (SOS) said in a statement that because of threats to the children’s safety, Ocampo and his group decided to “rescue” the children from the STTICLC school in Sitio Dulyan.

SOS said all 5 vans were held while Ocampo and the others remained under police custody.

The Talaingod municipal government had earlier declared Ocampo as persona non grata  because of his supposed support for communist rebels.

The arrest comes nearly 4 months after the PNP mounted a manhunt for Ocampo and  fellow former leftist lawmakers Teddy Casino, Rafael Mariano, and Liza Maza, in connection with a case filed 12 years ago, when they were charged with conspiring to kill two people in 2003 and 2004.

In August, a Nueva Ecija court dismissed the murder charges against them. – Rappler.com