Nov 29, 2018 2:00 PM PHT
Allan Nawal
Facebook Twitter Copy URL
Copied
(5th UPDATE) Police base the charges on the presence of 14 minors in the vehicles of the National Solidarity Mission, which had among its delegates former Bayan Muna representative Satur Ocampo and ACT Teachers Representative France Castro 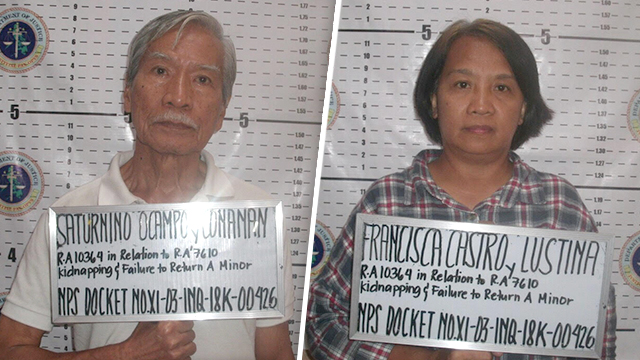 Senior Superintendent Ferlu Silvio, Davao del Norte provincial police chief, confirmed this a day after Ocampo, Castro, and over 70 delegates of the National Solidarity Mission (NSM) were arrested in a checkpoint in Talaingod. They had since been detained at the Talaingod Municipal Police Station.

Ocampo, Castro, and the 16 others were accused of violating Republic Act 10364 or the Expanded Anti-Trafficking in Persons Act of 2012, in relation to Republic Act 7610 or the Special Protection of Children Against Abuse, Exploitation and Discrimination Act, kidnapping, and failure to return a minor.

The joint police and military team based the arrest and the charges on the presence of children in the NSM vehicles, and said they “rescued” the minors aged 14 to 17. Davao Region police said the minors were being transported from Barangay Palma Gil in Talaingod, towards Maco in Compostela Valley.

The Salugpongan Ta’Tanu Igkanogon Community Learning Center Incorporated said, however, that the children were students of the STTICLC school in Barangay Palma Gil  who were being evacuated by the NSM due to alleged harassment by state forces, including a food blockade to the school.

The Davao del Norte police chief said the kidnapping charge stemmed from the claim of a minor that he was being held against his will.

“His parents had been trying to secure him for the past 5 days but were rejected,” Silvio told Rappler in a phone interview.

As for the rest of the children, Silvio said the social welfare office of Talaingod continues to conduct a “profiling” on them.

“Some came from as far as Zamboanga del Sur,” he added.

Chief Superintendent Marcelo Morales, Southern Mindanao police director, said on Friday, November 30, that Ocampo, Castro and 16 other NSM delegates – mostly teachers at the Salugpongan school in Talaingod – were “booked” and “charged” on Thursday.

Morales also said Davao del Norte Prosecutor Normal Solis recommended an P80,000-bail for each of the 18, and ordered them to submit their counteraffidavits within 10 days.

Silvio said the detainees were being treated well.

The others detained are:

Leftist lawmakers comprising the Makabayan bloc in the House of Representatives   denounced what they called the “illegal” arrest and “trumped up charges.” – Rappler.com