Facebook Twitter Copy URL
Copied
President Duterte's environment, tourism, and interior secretaries assure the residents of this Palawan town there will be ‘no closure but only rehab’

The 3 Cabinet officials reiterated the entire town would see “no closure but only rehab,” as well as the shutting down of non-compliant businesses, the Philippine News Agency reported.

Cimatu directed the municipal government to restrict the public from swimming at the beach in Barangay Buena Suerte due to high fecal coliform bacteria at 1,300 parts per million (ppm).

“If it goes down to 100 ppm (acceptable standard), then we will open [it] again for swimming. We will put a marker there that says off limits,” he said.

Buena Suerte, one of the 4 barangays covering Bacuit Bay, is where the town’s main sewer empties into the sea, El Nido Mayor Nieves Rosento explained. She said the failure to meet the safe water standard in this area is due to non-compliance of some establishments near the shoreline.

In September, the environment department announced the fecal coliform level in barangays Masagana, Maligaya, and Corong-Corong within Bacuit Bay has reached and been kept at normal level. This means they have met the safe standard that falls under Class SB waters or those suitable for public swimming. 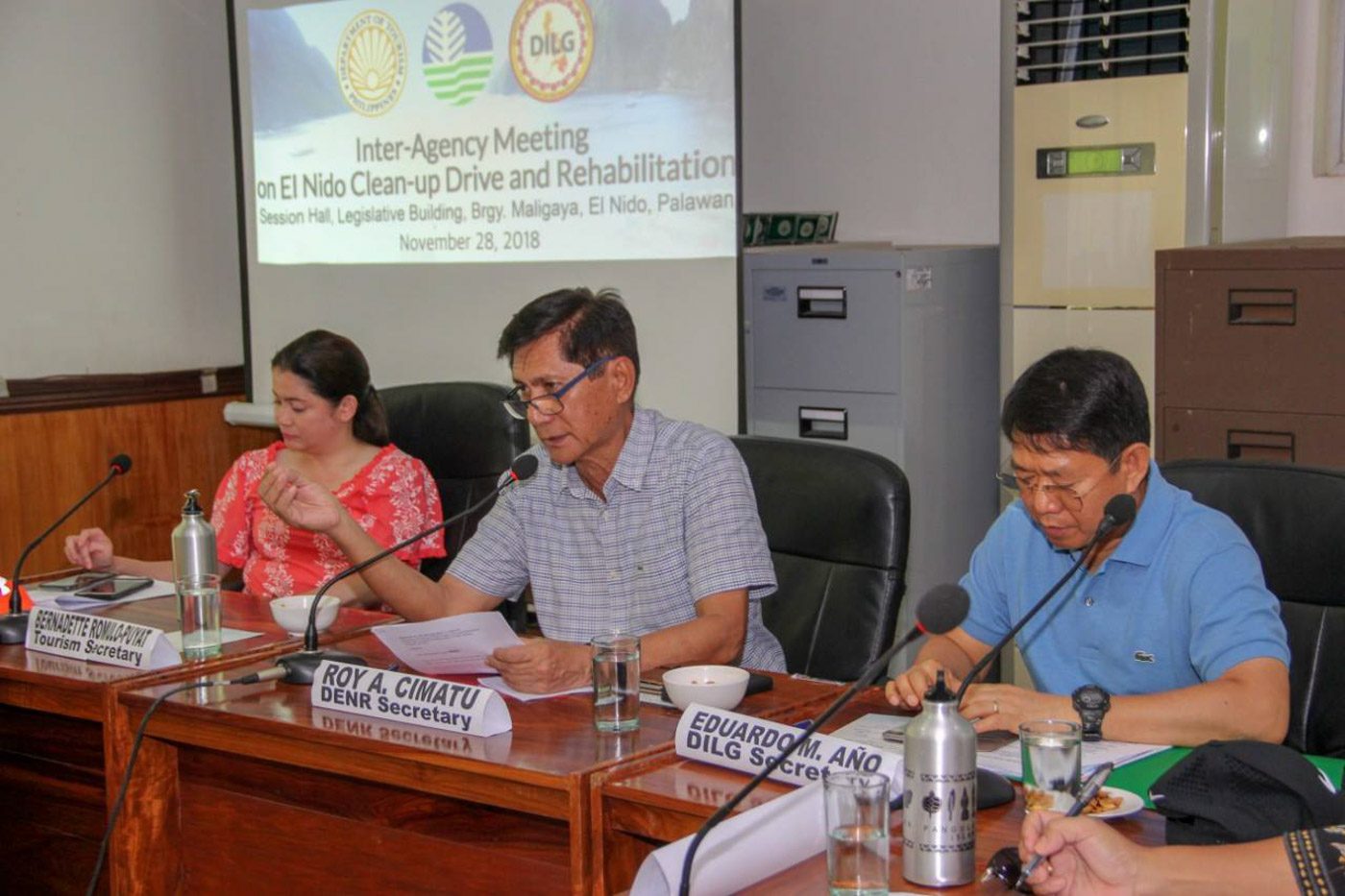 The mayor gave assurances to improve the water quality in Buena Suerte, with the completion of their centralized sewage treatment plant (STP) that will remove contaminants from municipal wastewater.

“We hope to complete [the facility’s] construction in 6 months,” Suerte said, hoping for a favorable weather condition to finish the project on time.

Town administrator RJ de la Calzada told Rappler that the centralized STP in Barangay Villa Libertad includes putting up a cluster tank in Buena Suerte. This facility, he said, is in addition to the town’s existing STP.

“All of the wastewater from households and business establishments will go to the cluster tanks,” De la Calzada said. From there, “the wastewater will go to the main tank located at the elementary school, and then will be brought to the processing plant in Villa Libertad,” located outside the town center.

During the site inspection, Cimatu broached the idea of imposing an additional 20-meter setback to the 3-meter easement zone so tourists could enjoy a wider beach just like in Boracay.

“What if we push the 20 meters more…because how can people enjoy the beach with just 3-meter easement? This is intended for swimming,” he said.

Puyat agreed: “Maybe more tourists will come to El Nido if they see that the beach is already clean and wide enough for them.”

Rosento explained the 3-meter easement is the setback the law prescribes for highly-urbanized areas. If the suggestion pushes through, she worries it will affect a lot of business in their town.

“We’re hoping that it won’t go to that because it will be a long process. Some of the properties here are titled. Besides, the case here is not really like Boracay,” she said.

El Nido’s beaches are expected to be more spacious in the coming weeks with the complete removal of some 19 remaining establishments that partly encroached on the coastal easement zones, De la Calzada said.

El Nido has seen a spike in tourist arrivals in the last 3 years, reaching 200,000 in 2017, municipal tourism data show.

Puyat said her office would help the municipal government in conducting a carrying capacity study that would state the number of people El Nido can accommodate without causing harm to its environment.

Currently, El Nido authorities implement a carrying capacity policy that limits the number of kayaks and tourists in its lagoons, an effort the 3 top officials lauded.

“We would like to commend the local government for doing the clean-up in advance, unlike Boracay where it was like a stalemate,” Año said. He directed the town police to ensure the strict enforcement of smoking and liquor ban, especially on the beach.

The 3 Cabinet officials vowed to give all-out support to the municipal government, including allocating funds to finish the rehab within 6 months. – Rappler.com