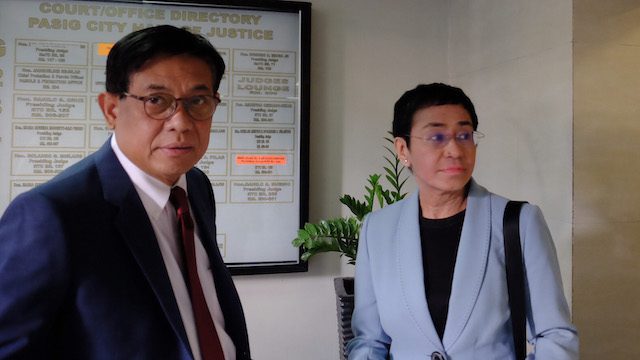 Facebook Twitter Copy URL
Copied
(3rd UPDATE) 'What the court did today was to avoid a situation where there is hasty, malicious, and oppressive prosecution of innocent people,' says Rappler lawyer Francis Lim

Pasig Regional Trial Court Branch 265 Judge Danilo Buemio on Friday granted Rappler’s motion to suspend the arraignment pending a ruling on RHC and Ressa’s motion to quash filed before the court on December 4.

The December 4 motion asked the court to void the charges, if not remand investigation to the Department of Justice (DOJ) – or at least suspend proceedings while they avail of appeal remedies.

Buemio tentatively set the arraignment and pretrial of Rappler and Ressa to February 6, 2019.

DOJ did not object to the request when it was raised by Ressa and Rappler’s lawyer, securities expert Francis Lim.

“The urgent motion to quash information, remand case, or suspend will be considered by then. In the meantime, [this court] tentatively sets the arraignment and pretrial of accused to February 6, 2019,” the judge said.

Lim hailed the decision as a victory for due process. “What the court did today was to avoid a situation where there is hasty, malicious, and oppressive prosecution of innocent people,” he said.

In the December 4 motion, Rappler and Ressa said they “have been deprived of due process as there was obvious haste and lack of objectivity and neutrality of the government through the Bureau of Internal Revenue (BIR) and the DOJ in affording protection to the Accused herein, this information should be quashed as this is a clear case of persecution rather than prosecution.”

Rappler and Ressa had been charged at the Pasig RTC with violation of Section 255 of the tax code, or supposed failure to supply correct information in their Value Added Tax (VAT) return for the 2nd quarter of tax year 2015.

This is only one of the 5 tax cases filed against them. The other 4, which stemmed from the same issue in the same year of 2015,

The DOJ had indicted Rappler and Ressa with 5 charges of tax violations. The other 4 cases were filed before the Court of Tax Appeals for alleged failure to supply correct information in the VAT returns for the 3rd and 4th quarters of 2015, failure to file an Income Tax Return (ITR) for 2015, and evading tax for 2015.

Various groups and personalities have urged the Philippine government to drop the tax evasion charges, calling them an attack on press freedom.

David Kaye, the United Nations Special Rapporteur on freedom of expression, had called the charges “a serious threat against independent and investigative journalism in the Philippines, and will have implications beyond its borders.” (READ: Journalists, media groups and advocates slam ‘attempt to silence Rappler’)

Human rights groups and media watchdogs saw the charges as persecution of media seen as critical of the Duterte administration policies, particularly its bloody campaign against illegal drugs. (READ: [OPINION] A new weapon against press freedom in the Philippines) – Rappler.com