No actual rebellion, no data to back martial law extension – lawmakers MANILA, Philippines – Two opposition lawmakers said the government has failed to provide sufficient evidence to prove a third extension of martial law in Mindanao is needed to quell rebellion and develop the southern island.

“There is nothing in these 4 grounds cited that shows actual uprising, actual rebellion, actual armed uprising. The Revised Penal Code imposes as elements for punishing the act of rebellion the element that there is an armed, actual uprising for the purpose of removing certain territories of the Philippines,” said Drilon.

Duterte cited 4 grounds in his letter to Congress requesting for the extension:

For Drilon, these grounds are not sufficient, saying: “We must remember that martial law is the highest form of self-preservation…. It cannot be the norm.”

He added that the Duterte government cannot argue that martial law “makes governance effective.” Drilon said this is what senators were told during their security briefing on Tuesday, December 11. (READ: Senators raise legal issues on one-year martial law extension)

Security officials told lawmakers during the Tuesday briefing that the main intention of the extension is to “wipe out” communist and terrorist groups, echoing Duterte’s arguments.

No data, no budget 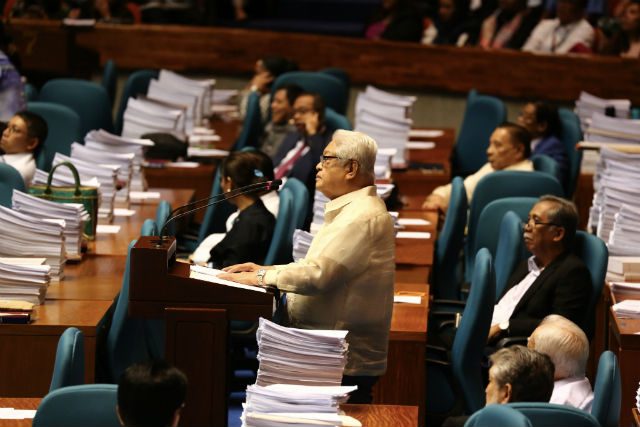 Lagman, meanwhile, focused his line of questioning on data. He asked newly minted Armed Forces of the Philippines (AFP) chief Lieutenant General Benjamin Madrigal how many “remnants” of rebels were still in Mindanao and how many arrests had been made so far.

He said 143 people were arrested and charged in court for rebellion.

But Madrigal admitted that the proposed P3.757-trillion budget for 2019 does not provide for any allocations for another year-long extension of martial law in Mindanao.

The AFP chief also could not provide any data when Lagman asked for growth, inflation, and poverty incidence rates in Mindanao in the first quarter of 2018 as well as during the 4th quarter, from October to the present day.

“We have no data, your honor,” said Madrigal.

Lagman then question the lack of data to justify the martial law extension in Mindanao.

“I am asking these questions, Madam Speaker, Mister President, because there have been these repeated claim that martial law contributed to the development and growth in Mindanao. But how can this be validated when there is no empirical data in which this claim can be anchored?” asked the opposition congressman. – Rappler.com